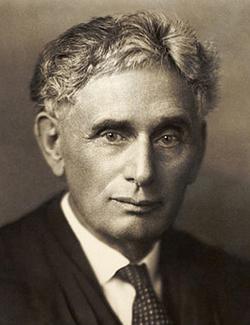 In the Minnesota delegation, Sen. Knute Nelson voted “no” to approve the nomination and Sen. Moses Clapp “paired”* his vote with Sen. Asle Gronna of North Dakota.

Wilson’s nomination of Brandeis precipitated a bitter confirmation fight lasting an unprecedented four months. The Senate Judiciary committee convened a public hearing for the first time to vet the nomination.

Attorney General T.W. Gregory endorsed Brandeis as the “greatest lawyer in America.”  Opponents such as the Boston Morning Globe described Brandeis as a “radical,” a theorist, and a “self-advertiser.”  Brandeis’ Judaism was not “overtly pressed,” according to his biographer, Alpheus Mason.

The bitter fight over Brandeis’ nomination – seven former ABA presidents opposed it, including William Howard Taft – led Wilson to say: “I never signed any commission with such satisfaction as I signed this.”

Brandeis served on the Supreme Court from 1916 to 1939 (the eve of the American entrance into the Great War to the eve of World War II).  Despite his difficult passage to nomination and acceptance, he wrote for the majority 85 percent of the time in the 528 opinions he authored. Brandeis also wrote salient and prescient dissents, which over time evolved into the law as his rationales were adopted by other justices.

The role of government in the lives of Americans was of keen judicial interest to Brandeis, although it is interesting to speculate that he may have yielded on the writing of some opinions because of his identification as a Jew.

The realm, reach, and influence of Brandeis was reflected in important Minnesota cases (and ultimately historic cases) that reached the Supreme Court. Brandeis dissented in Gilbert v. Minnesota (1920) in which the court upheld a Minnesota statute forbidding communication discouraging enlistment in the armed forces. He wrote that the right to speak against functions of the federal government was a privilege of all Americans – at the time of the Palmer Raids and the post-World War I “Red Scare.”  This was a brave dissent, but not the law of the land.

The echoes of a brawling, raucous prohibition-era Minneapolis reached the Supreme Court in Near v. Minnesota (1931). Perhaps because the underlying case involved an anti-Semitic, anti-Catholic and anti-black tabloid – Brandeis joined the 5-4 opinion of Chief Justice Charles Evans Hughes broadly condemning prior restraints of the press.

The people of Minnesota – like the rest of the nation – suffered terribly during the Great Depression (crop prices fell 60 percent in largely agrarian Minnesota). By a 5-4 vote – with Hughes again writing the majority opinion with Brandeis joining – the court upheld a temporary Minnesota moratorium against the foreclosure of farms and homes in Home Building and Loan Association v. Blaisdell (1934).

The court majority carefully considered the emergency-circumstances findings of the Minnesota Legislature in enacting the statute with less deference to the sanctity of contract. The majority (including Brandeis) followed Brandeis’ pioneering Supreme Court advocacy from a generation earlier in Muller v. Oregon (1908) in which his “Brandeis Brief” cited studies, reports and statistics in defending Oregon’s statute establishing maximum working hours for women.

We are also left to wonder if Hughes assigned the Blaisdell opinion to himself – a pillar of the eastern Republican establishment – because this “radical” if temporary outcome could have been seen too much as an outcome of the philosophy and personality of Brandeis – if he had written the opinion. After all, the court was addressing, if not upsetting, fundamental, deeply grounded principles of American economic relationships.

Looking back over 100 years, to be the first Jewish associate justice of the Supreme Court sitting in the 1920s and 1930s would have meant on occasion discernment and deliberation about which majority opinions to write, even for a figure as fearless as Louis Brandeis.

Steve Hunegs is the executive director of the Jewish Community Relations Council of Minnesota and the Dakotas.

* According to Senate.gov, pairing is a voluntary arrangement between individual senators to offset their votes on a rollcall vote, so that if one of the senators needs to be absent it is offset by another member who does not cast his vote. “When less than a quorum votes, but the addition of names of Senators present and paired and announcing votes made a quorum, the vote is valid” (quote from “Riddick’s Senate Procedure”).

Realm, reach and influence of Brandeis was reflected in important Minnesota cases