In 2004 I was in France reporting on the Cannes Advertising Festival on behalf of ArabAd Magazine, not only as an Arab, but also as a Muslim woman and a veiled one. For a whole week I was following up on the Arab delegation, arranging interviews with winners and even scoring with the festival’s highest rank and advertising celebrities. I was very proud of myself and thought I deserved a day off before traveling back to Lebanon. 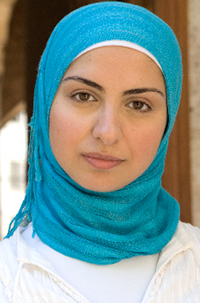 Nice, as the closest town to Cannes, was my leisure destination and I enjoyed wandering aimlessly at its charming Sunday market. The craft kiosks lining up next to farmers’ colorful produce and eclectic bags fascinated me. I looked forward to having breakfast at one of the local cafés. As I was entering the establishment, a long skinny waitress blocked my way and said in a snooty French accent: “Where are you going?” I said naively, “I want to have breakfast.” She said, “The restaurant is booked.” I looked around and saw people coming in and out freely. Clearly the restaurant was not booked. The waitress turned to me and huffed, “People like you have no place in this restaurant.”

Back in my hotel room, I cried my eyes out. I vowed that night never to be quieted again.

The animosity toward Muslims in France dates to long before recent terrorists attacks. The ban on “conspicuous religious symbols,” including headscarves in 2004 and the full-face covering in 2011, was the start. Its latest iteration bans the burkini, a swimwear designed to cover most of the body worn primarily by Muslim women. The religious obligation for women to cover their bodies stems from the concept of modesty that Muslim women believe in — in simple terms, converging the attention on women’s thoughts rather than their bodies and bodily assets. Objecting to the ban on the burkini should be the quest of every woman.

This decision exposes the West to double standards, furthering discussions on the clash of civilizations. In most cultures, isn’t a woman free to wear whatever she wants? Isn’t a Muslim woman’s body her own and isn’t she free to claim it in totality and proclaim it as private property the very same way a so-called “liberal” woman proclaims her private parts as private?

The West is still struggling with women’s freedom, and this decision proves it. Why is it that 21st-century male state officials are deciding what parts of a woman’s body she should show or cover? Where is the feminist movement in this? Isn’t the ban on the burkini another way of forcing women to strip?

The ban on the burkini is troublesome, to say the least. The Muslim women who have fled patriarchal communities are facing a different kind of oppression in the West, specifically in Europe, one that imposes a specific oppressive ideology in the name of freedom. France is failing to acknowledge its religion of “no religion.” Is it hypocritical of France to oppose the very same values it preaches?

I thank God for the U.S. Constitution. I truly do. The great country I live in guarantees my right to practice freely and display the beauty of my religion without advocating for it in governmental institutions, whatever my religion is. Our founding fathers got it right and I believe this is why the U.S. is far better at dealing with terrorism than Europe. That is unless Donald Trump becomes president.

My headscarf is my invisible crown. I take pride in covering my body so people can focus more on what I say and be less critical of my shape. My body image is totally my own and I am not fighting the society to prove my size is appropriate or perfect in its imperfections. My body is simply mine.

Hanadi Chehabeddine is an award-winning public speaker and writer. She recently received the Eden Prairie Human Rights award 2016 for her efforts to dismantle misconceptions about Islam and build bridges of unity. She is currently pursuing a master’s degree in International leadership at the University of St. Thomas. Before coming to the U.S., she was an award-winning creative and communication specialist working across different media.

Ban the burkini ban: How the same decision that claims to liberate women actually oppresses them