“Please step forward to the spot marked on the ground. Look forward at the camera and state your name clearly for the recording. Remember, don’t be nervous; you’ll do just fine.” These were the comforting words, along with a warm smile, that I received from one of the assistants of the casting director for my audition. 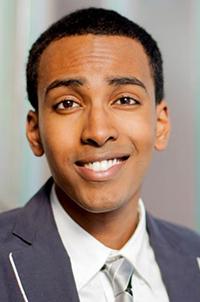 Almost five years ago today, I was one of the many people to turn out for the open casting call held in Minneapolis for the film “Captain Phillips,” a film depicting the events that took place off the coast of Somalia where pirates overtook a cargo ship captained by an American. Out of the hundreds that attended the first open call, I found myself among the dozens that received a callback for the second round. I didn’t find my path to Hollywood, but Somalis had found themselves a place in cinema, reaching a global stage. However, the concern now was whether it was to our benefit or detriment.

The Brian Coyle Community Center that held the casting call years ago put on a free screening to the community this past Saturday of a new film making its way in the festival circuit. The film, “A Stray,” is critically acclaimed, winning awards at local film festivals such as the Minneapolis-St. Paul International Film Festival, where I heard of it as a volunteer, and the South by Southwest Film Festival, where it premiered. The lead actor in the film, Barkhad Abdirahman, was also a star in “Phillips.” He acted alongside Tom Hanks and Barkhad Abdi (who also is from the Minneapolis Somali community).

The film is a great representation not only of the local scenes and landmarks of the Twin Cities, but it also did a phenomenal job portraying of Somalis living in Minnesota. The film brings the scenes of a family’s home to the forefront, consisting of hardworking mothers and older siblings taking care of their younger sisters and brothers. Images of the Somali malls come across the screen and show a familiar atmosphere of the local shops where Somalis purchase clothing and goods. To an outside audience, these scenes invite them into an intimate experience that may seem foreign to them. The use of language in the film was elaborate, tastefully mixing Somali and English, including subtitles. Luckily, the film stayed authentic to the Somali viewer, like me, who appreciates the cultural and linguistic subtleties.

A theme of personal struggle

Films like “A Stray” have a great benefit to the communities they depict, as well as a responsibility. The director, Musa Syeed, is an accomplished filmmaker who has won awards for past projects at Sundance and other distinguished festivals. His inclusive approach to his latest film has prioritized local talent and shaped the narrative around cultural identities juxtaposing with an urban environment in Minneapolis. The story is centered on the life of a young Somali man going through a hard time with family, friends and his own personal struggle. This is a theme many young Somali men can relate to. Much of the youth face disadvantages for employment, education and economic mobility, which the film poignantly touched on. Although there is a need for authentic stories positively portraying the Somali community of Minnesota, much of the financing and attention is focused on larger productions that fall short.

Somali-Canadian artist and musician K’Naan has come to Minneapolis along with an HBO production team to film their proposed pilot for the show, “Mogadishu, Minnesota.” The series takes place in the largest Somali community of the diaspora and focuses on the struggles of the average family, including their efforts to adapt to a new country. Information leaked about this production about a year ago with the working title, “The Recruiters.” This gave many people the impression that the series would focus on Minnesota’s history of terror recruitment years ago with the disappearance of many youths suspected of joining the Somalia-based terror group Al-Shabaab.

Recently the fears around radicalization and recruitment have rekindled because of concerns about ISIS abroad. Nine young men from Minnesota were recently charged with conspiracy to join a terrorist group, and three of them have been found guilty after pleading innocent and are currently awaiting sentencing.

Many in the community see this production as opportunistic for those involved, including trying to hijack a situation the community has been facing and amplify it as a commodity. Not only do Somalis face the challenge of countering narratives from news pundits, but they also have to combat the stories told without their voices considered.

The opposition to the production has manifested into protests and public meetings where residents are vocal on why they see this production as harmful and erodes the work they have tirelessly done in order to preserve the Somali image. During a West Bank Block Party (an annual gathering organized by the West Bank Community Coalition), K’Naan appeared as a special guest to perform some of his well-known songs. Soon after he took the stage, many in the crowd protested the performer, which I documented in a video posted last month. Some held up signs against his affiliation in the HBO project and ties to Kathryn Bigelow, who was at one point the executive producer of the production. The block party ended with a few arrests, and many in the crowd got pepper-sprayed.

Bigelow’s involvement is controversial because of her past films, “Zero Dark Thirty” and “The Hurt Locker,” for which she gained great recognition. However, her fame was at the expense of promoting demeaning images of the Muslim community. Having her name tied to the production made many people hesitant to have any enthusiasm for this proposed series, and some even organized efforts to block its launch.

In their path to seek rights to film at the iconic Cedar-Riverside high-rise neighborhoods, the production team was struck down with a unanimous decision from the Minneapolis Highrise Representative Council, which is an independent nonprofit group that represents the residents of the area in question. Although the team is allowed to take external shots of the buildings on Cedar Avenue, they have to go elsewhere for any interior shots.

Large budget for the pilot

The pilot has a large budget of $5.5 million for its initial production and if the series is picked up, it could lead to a 10-episode season with each episode estimating to be around $5 million. Local officials, such as Minneapolis Mayor Betsy Hodges and City Councilor Abdi Warsame, expressed support for the production and highlighted its benefits to the local economy and job prospects for residents. It isn’t clear how the money would go into the community by distorting their depiction to a larger audience and to what degree residents would benefit financially after years of hardship. Filming has begun and is scheduled to continue until the end of the month.

The community feels the effects of the continued stereotyping of Somalis as potential radicals. The recent mall attack in St. Cloud has increased this concern for the state’s community of Somalis, as others face backlash and discrimination. There is also a surge of hate crimes against Muslims around the country.

A few young men were shot at over the summer, and bullets struck some of them. This took place during the month of Ramadan, which implies that it happened solely from their appearance and faith. Somalis are also facing cases of discrimination from law enforcement through surveillance and profiling, which pairs their ethnic background and religious faith as identifiers of potential radicalization.

The Countering Violent Extremism initiative has had a foothold in the Somali community of Minnesota by financing social services to private groups for their community in partnership with law enforcement agencies. This partnership has left many concerned. After much debate and pushback, there has been transparency in the funding so it is no longer tied to law enforcement. Funds have since been allocated to the Department of Employment and Economic Development of Minnesota as a part of the Equity Fund that Gov. Mark Dayton had signed into law to help assist those in our state’s community that are facing disparities (such as Somali and immigrant youth, those with disabilities and veterans). I, along with others, am a part of the review panel assisting DEED in its assessment of proposals for grants given by this fund. With the organizations involved we hope to stimulate changes in our community at large.

We hope for authentic stories

As our narrative grows and more people hear about individual stories from the Somali diaspora in the Twin Cities, the hope is that they hear authentic stories originating close to home. Communities such as these have been exploited and commoditized for entertainment with the news cycle and Hollywood scripts spreading their fear-driven stories to the masses. Somalis as black, Muslim, immigrants and refugees find themselves at the crossroads of apathy. The broader communities feel complacent with their mistreatment because images stemming from the media induce a kind of reluctance to our experiences. This is why positive narratives of our image have to be circulated, and others that grasp at the negative should be scrutinized and cautious in their attempts to depict a multilayered and nuanced group of people. We have a lot to share, just like any group of people that make up this great state.

“A Stray” is showing at St. Anthony Main on several dates through Oct. 27.

Abdirahman Mohamed is a St. Paul resident who works in the St. Paul Public Schools district. Outside of work he engages in community outreach events, assists in the production of documentary and journalistic reporting and has a passion for mobilizing others for continuous change. He can be reached on Twitter at @abdiragemo.