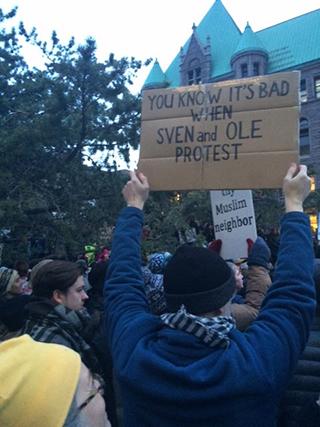 Courtesy of the author

I am not a protester by nature, at least not the “in the streets” variety.  Part of my aversion to “in the streets protesting” is that I don’t quite trust a crowd mentality, on the left any more than on the right. I prefer nuanced, well-thought-out and articulated ideas and those come from a different channel. However, in today’s environment, I am rethinking my resistance to crowds and protest.

After the election, when my husband and I were deeply distressed, he did a lot of preaching to the choir. That’s me. Fortunately, we share the same views and the same distress. I kept saying, “We should be out in the streets!” This “choir” was ready to sing, albeit a tad off key. My crowd aversion was quickly forgotten. When things are so wrong, my instinct is to take to the streets to declare it.

It was a small step from that sentiment to attending the Women’s March in Washington, D.C., and that caused me to reassess my crowd aversion. It was a joyous and inclusive crowd, driven by the same instinctive awareness of what is right that drove me. There is a time to take to the streets and this is it. Marching to the chant of “Tell me what democracy looks like. This is what democracy looks like” felt absolutely right deep inside. I chanted with fervor, believing those words. I believe in democracy and inclusiveness and, yes, kindness. Those are the things for which I am comfortable protesting.

The immigrants and refugees order

The action against immigrants and refugees upset me more than anything prior, and that is saying a lot. Perhaps because we can clearly see the impact on people, and perhaps because it feels personal. My grandparents were immigrants and fortunate to have immigrated in the early 1900s. Had they waited until the middle of the century, they would likely not have escaped. Jews were not welcome in the United States, and many were turned away and sent to their death. Many of my family did not make it out. With 50 family members murdered in the Holocaust, I am aware that in another time, I could easily have been trapped on the other side. I also realize that it takes a certain comfort in one’s safety and place in the world to challenge, to protest. I imagine that few of those detained felt that safety. For that reason, I have a responsibility to protest on their behalf. 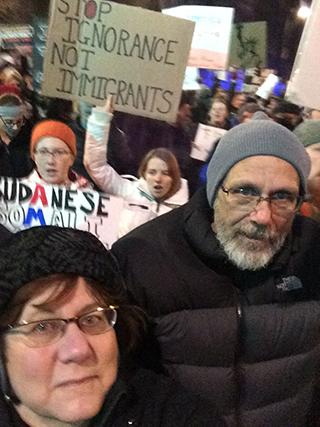 Courtesy of the author
Susan Weinberg and her husband, Martin Arend

I have been trying to find the best way to respond. When the news broke barring immigrants from seven Muslim countries, I wrote to my senators and congressman. I gave money to the National Immigration Law Center, I signed a petition and posted information, but all felt like small steps.

I was greatly heartened, however, by the protests at the airports. There is something about showing up that feels important. It is how we say, “This is not right.”  Protesting requires our bodies to follow through, and there is something about that physical action that kicks the rest of us into motion. It is the difference between a spectator sport and actually playing.

A time of firsts as people are stirred to action

This week we joined the political protest in downtown Minneapolis. We first stopped at our studio to make a sign, then joined the 5,000 people at the federal courthouse plaza. When we first arrived, I spotted a friend. She told us that she had gone to the Women’s March in St. Paul, her first protest. Her friend commented that this was her first protest.

That is what I find remarkable. People who would normally never protest are stirred to action, so disturbed that they are taking to the streets. That evening I chanted loudly, half dancing up Hennepin Avenue, feeling the energy of the crowd and grateful for our shared passion.

Susan Weinberg is an artist, writer and speaker who works out of her studio in NE Minneapolis. You can read more of Susan’s posts on her blog Layers of the Onion where a version of this piece first appeared.