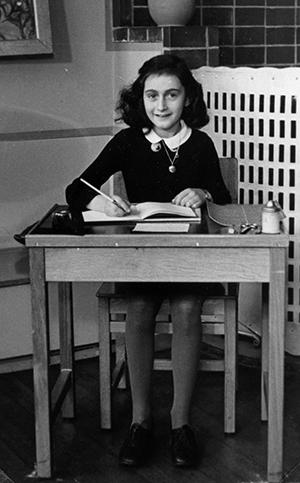 We all know the tragic story of young Anne Frank: more than two years living in hiding in an attic in Amsterdam without a breath of fresh air, a day at school, a trip to a library, or an afternoon at a park. And eventually, she and her family and friends in that tiny attic were betrayed to the Nazis, who deported them to concentration camps. Anne was sent to Auschwitz and then died in Bergen-Belsen, one of the 42,500 camps set up in Europe by the Nazis. She was 15 years old. She never finished high school, never married, never even finished her childhood.

Her story is my nightmare today.

Anne Frank was one of more than 1.5 million Jewish children who perished at the hands of people throughout Europe. They were poisoned with hate for all Jews, even for a 13-year-old girl. The Fascist leaders of Germany whipped ordinary citizens into a frenzy of xenophobia. Jews were blamed for Germany’s loss in World War I, for manipulating the world’s financial markets, for being part of a Communist plot to control the world. They were characterized as less-than-human brutes and savages who killed Jesus and were bent on raping Christian women and drinking the blood of Christian children.

It’s easy to incite people to hate. And it’s very easy for that hate to consume people’s minds, energies, and lives and to make them the pawns of an autocrat.

400+ laws enacted to persecute the Jews

The Fascist Nazi government in Germany passed more than 400 laws to enact the persecution of the Jews, from small steps that made it illegal for Jews to own radios, cameras, or even bicycles, illegal to walk on a sidewalk or sit on a park bench, to crippling laws stripping them of their businesses, their professions, the right to be treated in a hospital, the right to go to school, and their citizenship. They were required to register their identities and addresses so they could be rounded up for extermination.

Most of the laws were passed not by Hitler’s inner circle, but by people in towns and villages across Germany — mayors, council members, and civic leaders — who encouraged and promoted anti-Semitism against neighbors in their own communities. They spread hate, posted signs, hung billboards, passed laws, and eventually, local citizens, officials, and police across Europe rounded up and transported Jews in their own towns to places like Auschwitz to be killed or to die of starvation, torture, or disease.

People often say to me, “If I’d been alive and in Europe back then, I’d have stood up against the Nazis. I’d have helped save Anne Frank.”

She is with us today

We are in a new and terrible era when all Muslims are targeted and every Muslim is suspected of being a terrorist. Yet terrorism by Muslims makes up one-third of 1 percent of the murders in the United States. Since 9/11, there have been 54 fatalities caused by Muslim-American extremists. In the same period, more than 240,000 Americans were murdered. And not by Muslims.

This Islamophobia, spurred on by our government, gives hate-mongers a license to lash out with words and with deeds. This violates American laws as well as our deeply held American beliefs of equality, the separation of church and state, and freedom for us all.

We are a nation of pluralism

I am a Jew. Trump’s recent action to focus exclusively on Muslims and to take hate and neo-Nazi groups off the terror watch list licenses anti-Semitism. Swastikas are appearing in many places, including at Maple Grove High School, at the University of St. Thomas, and at the University of Minnesota. Two men on a Florida college campus openly wore jackets emblazoned with swastikas. Jewish community organizations have received nearly 50 bomb threats since the start of the new year, including at the Jewish Community Center in St. Louis Park, where I belong. FBI data show that Jews in the U.S. are subjected to the most hate crimes of any religious group, despite constituting only 2 percent of the American population. There is a national climate of rising anti-Semitism. The end of Nazism was not the end of anti-Semitism.

Anne Frank is here in hiding, in my Muslim friends, in me, in people in the LGBTQ community, in all of us who feel targeted by the Trump administration’s policies that are eerily akin to those begun in Germany in 1933, when Fascists took over that government. I have never been a fear-monger, but I am now afraid.

What are you doing to help the Anne Franks of today?

Ellen J. Kennedy, Ph.D., is the executive director of World Without Genocide at Mitchell Hamline School of Law, St. Paul.

Where is Anne Frank?