Recently on these pages, a few of my colleagues penned a missive, “It’s time for holdouts in the Legislature to accept rail transit.” I take issue with their facts and version of reality and would like to clear up a few things for your readers — perhaps bringing some actual discussion to why so many legislators have serious concerns over the Southwest Light Rail project. 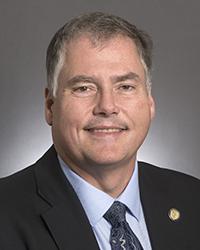 First, let’s establish some facts. While the Minnesota Legislature has provided limited funds for planning, the State of Minnesota has never held a single vote as to whether this is a good project to proceed with. Considering over $900 million of Minnesota tax dollars are going to be spent building this 12-mile extension to the Green Line, most citizens believe that the Legislature should have some say in the building of one of the most expensive public works projects in Minnesota’s history. The possible dissolving of the Counties Transit Improvement Board (CTIB) is further evidence of what is being done to avoid your elected Legislature at all costs.

Sen. Ron Latz and his co-authors portray the concerns as coming from “small circles at the Minnesota Legislature.” Recently, a letter was signed by 84 of the 201 (41.2 percent). This is hardly a “small circle,” and is clearly indicative of the major concerns that legislators have on this project.

They go on to tout the “excellent cost-benefit ratio” of the project. Because the project has never had a hearing (beyond a few minutes’ discussion at the end of an informational-only hearing), not a shred of this has actually been debated in St. Paul. The fact is that light rail transit provides less than a dollar in returned investment per dollar spent, versus the 2-4 dollars that MnDOT finds on road or bridges we build.

What my colleagues do not want to discuss is how expensive this inefficient mode of transportation is. When you include the amortized cost of construction, our current two open lines cost us $6.05 per ride in public subsidy. Riders pay less than a dollar per ride on top of that, although around 10 percent of riders routinely skip paying fares annually. The public subsidy for bus ridership, which moves 10 times more people, is less than half of that amount. And costs for the current lines are increasing at over triple the rate of CPI or inflation.

So what is the solution? First, don’t you think that one of the largest public works projects, that will impact every Minnesotan’s wallet, should have some level of scrutiny from your Legislature? More important, should we not invest our limited public dollars on efficient options, not a boutique option that caters to a select few? Bus Rapid Transit is a highly effective option that has wide support, including from me.

Let’s invest in transit options that work for Minnesota, and not be forced into what others “think” we should have.