How the world can be so vast

On a journey to the past.

On a journey to the past.

— “Journey to the Past,” from “Anastasia”

Ancestry.com television commercials saturate the airwaves. The commercials suggest that major genealogical discoveries await — resulting in, for example, lederhosen being exchanged for kilts; long-lost Italian uncles giving out free minestrone recipes; bloodlines leading us back to George Washington; and DNA tests revealing that one’s actual roots were misreported for generations. “Wow, I always thought I was Irish, but my DNA test told me I was actually connected to a nomadic herd of triceratops. Cool!”

These commercials raise the expectation that a person’s chromosomes are grounded in something very special. The Ancestry.com message is simple: Discovery of your own amazing past is merely a simple credit-card charge away.

Embarking on the journey

Several years ago, spellcheck failed me by inserting “etymology” for “entomology” in an email. These are quite different “ologies.” To this date, the recipient of the email is trying to unearth the real meaning behind the words “Jiminy Cricket.” That mistake forced me to think about my own family history, which I had never assembled.

My family’s history consisted of passed-down stories that had dimmed over time and a collection of fading black and white photos showing people whose identity was often uncertain. I decided to make it my mission to prospect this history. In embarking on this project, I received the strong encouragement from my three siblings, who said, “Are you sure you want to do this?”

My expectations for the results of this project grew as I watched Ancestry.com commercials. Many epiphanies were bound to occur. Was there an Olympic gold medal in the family’s past? Would I discover the existence of a deceased rich ancestor whose treasures remain unclaimed? Was there a kilt in my future?

Only with the technology of Ancestry.com could these possibilities become reality. I enthusiastically gave the company my credit card and suddenly at my fingertips were passenger logs, marriage certificates, old telephone directories and, most remarkable of all, color pictures of gravesites! The hunt was on to uncover the genetic trail that could explain the fabulous talents my siblings and I enjoy today.

Using the search engines of Ancestry.com, I began looking at my mother’s lineage. I marched back in time following the breadcrumbs left by her ancestors. The journey took me through southern Illinois and western Kentucky.

In order to provide historical context to subscribers, Ancestry.com provides timelines showing life changing events (world wars, technological discoveries, major political events, etc.) taking place while one’s ancestors roamed the earth. With the exception of the Civil War, my maternal ancestors appear to have been completely oblivious to, or mere spectators of, the many tectonic events that shaped our nation.

Compounding my disillusionment was my maternal ancestors’ involvement in the Civil War — an involvement which can only charitably be described as confused. They fought, tried to fight, or appeared to fight on both sides of the Civil War. While my great, great grandfather was mustered into the Union Army, he was soon captured in Mississippi and appears to have spent a large part of the war vanquished to the sidelines in Missouri. Although my brother’s current inclination to wear grey slacks with his blue blazer took on new meaning, hopes of discovering acts of wartime bravery faded.

While following Ancestry.com search “hints,” I had a vague recollection from my youth that my maternal grandma had talked about her “kinfolk” as “bootleggers” who made whiskey in the “hollers” of Kentucky. Unfortunately, Ancestry.com gave me no reason to think grandma’s memory failed her. My plan of finding a maternal bloodline leading back to the Niña, Pinta and Santa Maria got sidetracked at a still in Kentucky.

Hoping to find a redwood in what was otherwise appearing to be a somewhat indistinguishable family forest, I turned to my paternal side. While Ancestry.com provided some helpful information, its search engines appeared flummoxed by the various formulations of the name “Moilanen.” I turned back to my other technological friend: Google. 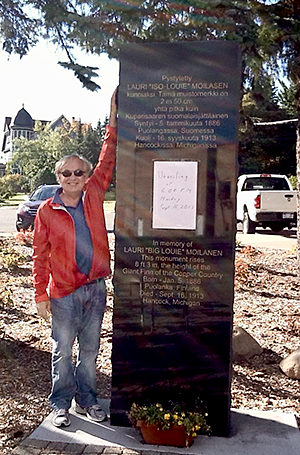 My great-grandparents immigrated in the mid-1800s from the area we now call Finland. These Nordic pioneers deposited themselves around the City of Hancock in Michigan’s Upper Peninsula. They lived through the boom and bust cycle of the copper mining industry.

The name “Moilanen” — which I was once wrongly told means “dilapidated housing” — is quite prevalent in northern Michigan. However, of the many Moilanen families who have lived around Hancock, one Moilanen stands taller than any other: Big Louie Moilanen.

Big Louie was a giant in the area — literally. He stood 8 feet, 3 inches tall, weighed approximately 450 pounds and had size 19 shoes. When Big Louie died in 1926, a customized casket was made for him. Big Louie continues to hold the record as “Michigan’s tallest man,” a record which is no doubt the envy of other record holders like Michael Phelps.

Several years ago, the City of Hancock decided to erect an 8-foot 3-inch monument to Big Louie. Recalling my childhood fascination with the height of the IDS building, I was convinced that Big Louie and my bloodline crossed. I decided attendance at the city’s ceremony unveiling the monument was mandatory.

After a seven-hour drive, I arrived in Hancock tired, but bursting with the pride of knowing that a person believed to be an ancestor was about to be posthumously honored. I arrived at the site several hours early to make sure that I could get a good seat and see all of the festivities. Move over Mount Rushmore, here comes Big Louie Moilanen!

At the appointed time, my sightline was not affected. There were less then 12 of us present, along with the mayor of Hancock. The mayor asked whether he should wait to begin the ceremony until more people arrived. The uniform response was to proceed since everyone who had an interest in the monument was already there.

The mayor’s remarks included the many challenges that Big Louie faced, including his tour with the Barnum & Bailey circus from 1908 to 1910 as “The World’s Tallest Man.” A discussion ensued, praising Big Louie as the best bartender Hancock ever had because “he was the only bartender who could reach all of the bottles at the bar without ever getting up from his stool.”

When asked who I was, I explained that I was a “Moilanen” who drove up from Minneapolis to honor this distant relation. This resulted in some knowing smiles and dumbfounded stares. When I asked where I might buy a T-shirt stating “Proud Relative of Big Louie” or an oversized coffee cup featuring Big Louie’s picture, I was told that no such merchandise existed in Hancock but that this insight “was exactly the type of thinking we need around here.” One attendee suggested that, on my way back to Minneapolis, I stop in Darwin, Minnesota, and see how that town was marketing the world’s largest twine ball.

For sure, surprises await explorers of family history, but not those promoted through slick TV commercials. Readers about to excavate their family histories, be warned. Far from discovering a connection to royalty, it is likely that most family trees, like mine, consist of good folks who willingly carried the water necessary so that the sprinters could run their race, were part of the larger chorus who never sought to be the solo soprano or who willingly filled the stadiums to encourage those on the field.

Robert Moilanen is a Minneapolis lawyer.

Trading lederhosen for a kilt — really?