A volunteer for the cause of gun violence prevention for several years, I feel as though I’ve awakened in a magical land where high school “kids” are wise and eloquent experts on life, values and the art of political pressure. A land where craven politicians are suddenly back on their heels. Where the majority voices for sensible gun policies are echoing from coast to coast. I keep pinching myself to make sure this is really happening. Thank you, Emma and David and Cameron and Delaney and Sarah and all your valiant Marjory Stoneman Douglas schoolmates — you are my heroes. 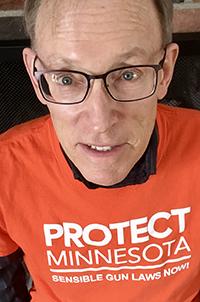 Many people like me have been laboring away, with scant success, trying to draw attention to what we believe is a catastrophic disconnect between our country’s values and our gun policies. We call out the stranglehold the NRA has on our elected officials, subverting the democratic process. We disassemble the NRA’s and their sponsored politicians’ arguments against sensible gun laws and their assertion that gun “regulation” (a word appearing in the Second Amendment) is unconstitutional. We connect the dots between these deceptive arguments and increased gun sales.

For me, that one sound bite, from a young person whose instant credibility was forged in protracted, excruciating trauma, has become the metaphorical speaking-truth-to-power moment that stands for all the work that came before, as did the Selma march and the man with a briefcase staring down a row of tanks in Tiananmen Square.

These kids immediately grasped their moral authority, their massive megaphone and their outsized footprint in history. Overnight, they became the conscience of a nation.

They said they’re the kids, we’re the adults, and we failed to protect them. They asked how many NRA dollars a life is worth. When asked if their movement is a slippery slope that will result in an increasing loss of gun rights, Emma said, “We have a right to live.” David said, “What we’re on right now is a slippery slope … this needs to be where we stop and stand up.”

Be still my heart.

Think of what they’ve accomplished already: A national Never Again movement and the upcoming nationwide March for Our Lives. Gun legislation in Florida and bipartisan bills introduced in Minnesota and elsewhere. Major companies severing lucrative ties with the NRA. Bastions of Congress, who’ve protected their careers behind a historically incoherent reading of the Second Amendment and related court decisions, trying to weasel out of a simple question: “Will you accept money from the NRA?” The mighty NRA, the monolithic giant that led a national culture shift from trust and optimism to fear and division, on the defense. By people too young to vote. Gun-rights extremists reduced to trying to patronize, shame, delegitimize and cook up tortured conspiracy theories about these virtuous and aggrieved student victims of a mass shooting. Good luck with that.

When you think about the persistent, thunderous reverberations that follow unexpected trauma — e.g. a simple car accident without injuries — and magnify that by the terror that comes with being shot at, shattering any sense of peace and comfort, these students’ instant potency is more than remarkable. It’s as if these are the people history has been waiting for. They’ve chosen to express their grief and anger by leading transformative change.

These compelling young people also seem to understand that their journey may be a long slog. They have 17 enduring reasons to persist until America’s gun policies protect innocent lives. And let’s face it — they’ll outlive the adults who’ve sold them out for NRA money.

Go forth, Emma and David and all your courageous compatriots, speak truth to power and write America’s next inspirational chapter of peaceful revolution for the common good. I, for one codger, will enthusiastically follow your lead, including marching for our lives on March 24 at the Minnesota Capitol. You got this.

A retired nonprofit executive, Rich Cowles is a writer and a volunteer for various nonprofits, including Protect Minnesota and Everytown/Mom’s Demand Action for Gun Sense.

Florida students: Overnight, they became the conscience of a nation