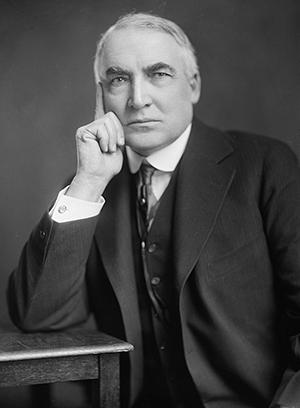 President Trump looks into his historical mirror and sees a reflection of Abraham Lincoln. Besides our president, very few people see that resemblance. So, where can we find a historical comparison for the Trump presidency?

Trump’s presidency appears to be the antithesis of the Boy Scout honesty the country enjoyed under Gerald Ford and Jimmy Carter. On the other end of the spectrum, comparisons to Richard Nixon are not a perfect fit. While Nixon shredded the Constitution seeking to maintain power, his administration was not tainted by claims of abuse of power for financial gain.

Prior to Watergate, the presidency best known for corruption and ineffectiveness was that of Warren G. Harding. Future historians will certainly find some similarities with Trump’s governance.

A president with limited skills and accomplishments

Harding, a Republican, ran for president in the aftermath of World War I. Harding campaigned on an isolationism platform calling for “America First.” Harding explained his election theme: “I don’t know what Americanism is, but it is a darn good word to win an election.” Harding won the 1920 election easily.

Harding spent considerable time golfing and engaging in acts of infidelity. Like those of our current president, Harding’s communication skills were challenged. In critiquing Harding, H.L. Menken wrote, “He writes the worst English I have ever encountered. … [I]t is rumble and bumble. It is flap and doodle. It is balder and dash.” Menken asserted that Harding’s greatest accomplishment was to give English a “new barbarism.” Had social media existed in 1920, Harding’s tweets would have been nonsequitur ramblings infused with misspellings.

However, speculation that Trump and Harding may be genetically linked ignores very real differences. For example, Harding weighed only 173 pounds and possessed a smidgen of self-reflection when he confessed, “I am not fit for office and should never have been here.” Also, one of Harding’s harshest critics wrote, “His (Harding) speeches left the impression of an army of pompous phrases moving over a landscape in search of idea.” Trump is somewhat different. He rattles off multitudes of conflicting ideas in the same sentence.

Harding died in office in 1923. At the time of his death, Menken wrote that Harding “… left behind him a career so horribly bare of achievements and also so bare of intellectual effort, that historians will have to labor, indeed, to make him more than a name.” In numerous pre-Nixon polls, historians recognize Harding as being our country’s worse president. Harding handily beats out such notables as Franklin Pierce and Millard Fillmore. So, where did Harding make a wrong turn?

Harding filled his administration with individuals whose main qualification consisted of being his “friend.” Charles Forbes headed Harding’s Veteran’s Bureau, Will Hays became postmaster, Harry Daugherty was appointed attorney general, Thomas Miller ran the Office of Alien Property, Albert Fall headed the Department of the Interior and Harding’s brother-in-law became superintendent of prisons. Each helped elect Harding, but each enjoyed limited experience for the positions they assumed. These appointments, and others, became collectively known as the “Ohio gang.”

Trump appears to be channeling Harding. Trump is creating his own gang by appointing his 29-year-old assistant (with no governmental experience) to run White House communications; his golf caddie as director of social media; a wedding planner to take on significant responsibilities at Housing and Urban Development; his home improvement contractor to become a senior administrator at the Environmental Protection Agency; and giving consideration to appointing his personal pilot as head of the Federal Aviation Administration.

Harding’s appointments plagued his presidency. Harding realized the mistake when he stated, “I have no problem with my enemies. But my friends, my goddamn friends. They are the ones that keep me walking the floor at night.” By 1923, Harding’s restless steps would have exploded a Fitbit.

Harding’s “friends” contributed mightily to his marred legacy. Forbes was convicted of fraud in connection with fixing contracts to build facilities for World War I veterans. Daugherty was criminally charged twice and was investigated for failing to prosecute companies in which he had a stock interest. Gaston Means, Daugherty’s “fixer,” gave out liquor licenses in exchange for favors and was eventually convicted of perjury. Jess Smith, Daugherty’s “bagman,” became a fall guy and committed suicide. Miller was convicted of defrauding the government. Hays was investigated for having accepted money from Harry Sinclair to pay off party campaign debts.

Sinclair and Edward Doheny were oil company executives who were the beneficiaries of lease awards in connection with Harding’s greatest gift to malfeasance, the Teapot Dome scandal. Teapot Dome involved the receipt of bribes by the interior secretary, in return for which Fall granted favorable lease terms over oil reserve lands.

The Teapot Dome scandal was investigated and prosecuted by a special counsel. During trial, Fall attempted to characterize the payments he received as “loans,” but he was eventually convicted of accepting bribes.

In the aftermath of Fall’s conviction, the special counsel prophetically wrote, “The issues involved in the pending litigation are far-reaching. … Can the public business thus be transacted in secret? Shall men be permitted to make alleged “loans” (not to use the uglier term) to public officials with whom they are dealing for the public domain?”

What Warren would tell Donald

With the exception of exceptionally poor judgment in hiring and neglectful oversight, the scandals that will forever tar Harding’s presidency did not directly implicate Harding. He was never found to have benefited from any of the pilfering and looting conduct engaged in by his “friends.”

In recent weeks, in addition to criminal charges being brought by the special counsel against Trump associates, the following activities involving Trump “friends” have been reported: the son of the secretary of HUD is purported to have engaged in influence peddling; hush money paid to a porn star; the letting of a $300 million dollar contract to a two-person business based in the secretary of the interior’s small hometown; suspicious stock trades by the former heads of the Centers for Disease Control and Prevention, Health and Human Services and a member of the President’s Regulatory Advisory Commission; the brother of the secretary of education pitching the president on his company’s ability to take over military operations in Afghanistan for just a few billion dollars; the president’s son-in-law receiving millions of dollars in “loans” from financial entities doing government business; looting of public funds for personal expenses by the head of the Veterans Administration; misuse of taxpayer funds for private jets; illegal use of the presidential seal at Trump golf courses to boost course aura; and lobbyists routinely currying favor by roosting at Trump-owned facilities.

Based on his experience, one can imagine the spirit of Harding whispering in Trump’s ear, “Donald, it’s your goddamn friends. Drain your swamp.”

Robert Moilanen is a Minneapolis lawyer who recently finished visiting all of the presidential libraries.