As the sky grew dark and the wind rose to a fury, in our windowless room in the Brookdale Library we were completely oblivious to the brewing storm, busy as we were trying to wrestle our way through a tense situation and some painfully knotty problems. I had been asked to facilitate a townhome association meeting because discord among the members had escalated, with accusations being hurled and aggressive interest groups working to rally people to their side. With the help of a facilitator the board hoped to find a mutually workable resolution amidst the intense animosities. 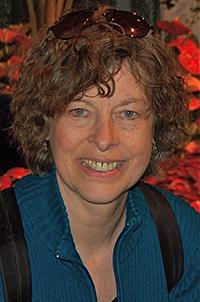 As I opened the meeting I commended the members, about 25 in number, for coming together for this difficult conversation. “We have a chance here to practice democracy,” I said, “to listen to everyone and work collaboratively, which can be a challenge.”

Then as we were just getting under way, making a bit of progress, library staff interrupted our meeting to notify us that the weather had shifted — a tornado was heading our way — and the entire library would be evacuated into our windowless room.

Suddenly, our mostly middle-aged, Caucasian gathering became inter-generational and multi-racial/cultural. Despite the shock of this abrupt change in plans, our better human instincts rose up instantly and we all pitched in, setting up more chairs and welcoming everyone into the room. Every chair was filled and people lined the walls and sat on the floor, perhaps 75 or more of us altogether, in tight quarters. A number of townhome owners gave up their chairs to our visitors.

“Now what?” I pondered, looking around the room at this mishmash of humanity.

Going to the microphone, not wanting to forego an opportunity, I asked, “How shall we entertain ourselves? … Any good books to recommend, stories, jokes … ?” After a brief silence a young Asian boy in the front row raised his hand and said he knew some jokes. He went to the mic and, indeed, he was full of riddles and jokes, much to everyone’s delight. They were mostly about pirates, e.g. “What kind of socks does a pirate wear? … Arrrrgyle.”

Then several adults shouted out a few jokes from their chairs. More silence, and then a Hispanic man walked to the mic and said he’d always wanted to be a standup comedian and this was his chance. He entertained us for a good five to 10 minutes, savored the enthusiastic applause, and thanked us all for being at his debut.

A question and a shift

At that point the focus shifted, as one of the visitors asked what our meeting was about. Homeowners responded with information about the townhome association, and described their homes and their neighborhood, and what they loved about it, e.g. all the wildlife they saw. This led to a riddle about geese and a discussion about the benefit of their flying formation, the way they need each other in order to travel the distances they must cover. “Isn’t that true of us, too,” someone offered. Smiles and nods appeared throughout the crowd, and I felt a quiet “thank you” within.

After 35 minutes we got the “all clear” signal and our visitors left, many thanking us for the good time. We proceeded with the association meeting, but with a totally different spirit. Issues were quickly and smoothly resolved, and the meeting concluded on a positive note, as members connected with each other and made plans to get together.

That day — May 22, 2011 — a tornado tragically ripped through north Minneapolis, destroying homes, tearing out trees, and taking two lives.

And a stormy townhome association meeting was interrupted and transformed. People of all ages, colors, backgrounds, from around the world, packed into a windowless room and practiced democracy, being different together, and they had a rousing good time.

And the “better angels of our nature” shone brightly.

We are not enemies, but friends. … Though passion may have strained, it must not break our bonds of affection. The mystic chords of memory will swell when again touched, as surely they will be, by the better angels of our nature.”