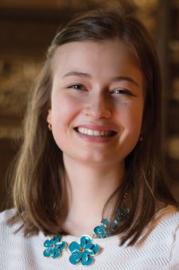 I am a first-generation American.

My parents immigrated here from Belarus, which used to be a part of the Soviet Union. My great-grandfather perished in the Holocaust. My grandparents and my father were victims of anti-Semitism in the former Soviet Union.

My mom and dad left their country and came here in hopes of living a better life for themselves and their future children. At that time in America, people immigrating from a Communist country were often not welcome. My parents had to tirelessly prove that they had no Communist connections and were simply trying to come to America because their country was not a place in which they could thrive. During that time, America feared Communists just as some fear immigrants coming to America today.

My experiences as a first-generation American have been good overall. I was brought up speaking Russian and English, getting flavors of both cultures while enjoying common “kid” activities. As an upcoming senior at Hopkins High School, I am grateful for the sacrifices my parents made to ensure I had the opportunity for a good life.

When I was in elementary school, I went to camp on the North Shore. Admittedly, there were some tears, and I was not exactly fond of the idea that I would be away from my parents. I took comfort in knowing that my parents were only a phone call away. We slept in dorms, we were fed, we were allowed to roam freely (to a certain degree). This was a real summer camp, an experience many American kids share with me.

Like millions of other American children who attend summer camp, I was comforted knowing I would be reunited with my family at the end of the week.

Unfortunately, this is NOT the experience the young kids on our Southern border will share with us. Even now that President Trump has signed an executive order to end the practice of separating families there, where are these children’s assurances that they will be reunited with their parents?

A TV commentator referred to the holding cells for kids at the Southern border as “essentially summer camps.” But others have referenced other kinds of “camps,” camps that reek of similarities to the Japanese internment camps and Nazi concentration camps. As I prepared for my summer camp, I was NOT required to take off my shoelaces because my camp counselors feared I would hang myself with them. I was not subjected to sexual abuse from my counselors.

I was certainly not stranded at my camp indefinitely, and I was not ripped from my parents in heart-wrenching tears.

America prides itself on being the country of progress. We are the land of the free and the home of the brave. We must not give up on our morals, and I ask you to not give up on the kids.

Jessica Melnik is a student at Hopkins High School.