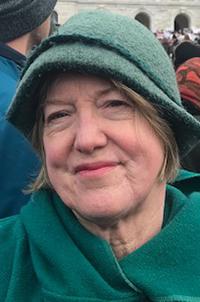 “I’m crying because you’re not there, Mommy,” said my 3-year-old daughter, Clara, pointing to a photo taken when she was a baby living in a Guatemalan orphanage. Even at her tender age, she could empathize with her infant self, all alone until her mother (me, the only mother she has known) came to claim her. I’ve never forgotten her words, so reflective of the love a child has for her mother.

Clara is now an adult. When she and I read about the primarily Central American children separated from their parents at the border, we take it personally. We know Guatemalans, having visited and volunteered there numerous times. We can’t help but think that Clara’s birth relatives might be among the separated.

When my husband and I adopted Clara through Children’s Home Society of Minnesota in 1980, we had the opportunity to visit the orphanage where she lived for her first six months and to meet the caring social worker in charge. We felt confident that her birth mother chose adoption for her child, although we realized that the word “choice” was relative, given the poverty embedded within the country. We have always been grateful that Clara’s mother released her at birth, before an attachment, which would have made separation more traumatic, had been formed.

A few years after Clara joined our family, the locus of control of adoption in Guatemala  shifted from social workers to lawyers, whose motivation was financial rather than humanitarian. Some (not all) aspects of adoption in Guatemala descended into an ugly swamp, as infants were bought from their desperately poor mothers. Some were literally stolen. The image of adoption in Guatemala was sullied. I stopped telling people I had an adopted child when I volunteered in Guatemala, afraid of their disapproval. Guatemala completely ended its adoption program in 2008, because of concerns about child trafficking. Unfortunately, some abandoned children now languish in Guatemalan orphanages and will never be able to join a family.

The word used to describe baby stealers in Guatemala is “jaladoras.” I thought of this word recently as I watched scenes of child separation on the news. The word took on even more significance when I read that our government apparently had no plan to eventually reunite children with their parents, that the plan only went in one direction. That some families might never be reunited, because our government didn’t keep records, coining the term “deleted family units.” What is this, if not “baby stealing”?

Guatemala is a notoriously corrupt country. Its presidents often end up in jail, usually because they have used their office to steal from their already impoverished citizens. The government is also incompetent. The national health system is nonfunctioning, and basic services, like garbage collection, aren’t provided. Racism is pervasive. Indigenous people descended from the Mayan Indians are discriminated against by the ruling ladinos (people of mixed or European heritage). Asylum seekers are coming here because their own government can’t or won’t protect them from crime, racism, and poverty.

Our child separation policy is teeming with cruelty, incompetence, and racism, not that different from how things work in Guatemala. We can’t allow policies like this to become normalized. To restore our country’s honor, we need to demand accountability for the cruelty and waste of money. We must demand the resignations of those responsible. We must keep making our voices heard, through protest, letter writing, and the voting box. We must insist that separated families receive financial compensation and trauma counseling. And perhaps we can atone for the error of our ways by offering asylum to some of these families, to prove that we haven’t totally lost our moral compass — that the United States is better than that.

But what will become of the children whose parents are never found? Will they spend their childhoods in limbo, unable to be reunited but unable to be adopted because no one is available to legally give permission? Will these children never stop crying for their mothers?

Martha Bordwell is a retired psychologist and writer. She and her husband are parents of two internationally adopted children.

Family separation at the border: We need to demand accountability