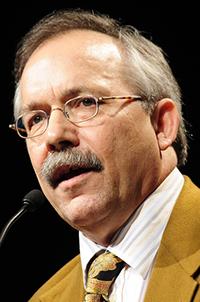 Human civilization was built on mining and the hard work of miners, often the most exploitative industry in any society. So it’s not hard to understand why many Minnesotans have an instinctive distrust of the mining industry.

However, the recent negative tenor of public discussion about the status of mining — an important part of our state’s heritage and its economic vitality — has been disheartening. Far too many, liberal, urban political candidates and officeholders have issued blanket denunciations of copper-nickel mining. Some have even called for “a moratorium on new mining leases.”

Let me say upfront that as the retired director of District #11 of the United Steelworkers, I represented iron ore miners in Minnesota and Michigan; gold miners in Lead, South Dakota; and other hard rock miners in trona, copper, potash, silver, and lead mines from Idaho to Missouri. My pension today is paid, in part, from the sweat and toil of those who went down into the bowels of the earth day after day. I’ve also vacationed and fished in the Boundary Waters every year for the last 45 years.

It’s easy for me to understand why anyone who read an account of the Sunshine Mine disaster in Idaho, where 91 steelworkers were killed in a silver mine fire in 1973, would reflexively say that all mining is bad and simply want it to vanish. But it’s even more important to understand why mining is critical to a sustainable 21st-century economy. Without mining, we cannot solve our most serious environmental problems, starting with climate change. Consequently, developing a sustainable mining industry — starting in Minnesota — is one of the most important tasks for Minnesota’s next governor, its U.S. senators, its next Legislature, its research institutes, its mining companies, and its environmental community.

Consider the role that these basic raw materials play in creating the clean-energy or low-carbon economy that science tells us is critical to stop global warming — bauxite, iron ore, lithium, copper, rare earth minerals, limestone, and, yes, metallurgical coal, to name just a few. Without continuing to mine these minerals, the global economy has no hope of keeping the temperature increase below 2 degrees Celsius, much less reaching the 1.5 degree target that scientists have told us is far preferable.

Let’s start with bauxite, the raw material required for making aluminum. We no longer mine it in the U.S., but we do still refine it into alumina and then smelt it into aluminum. Without aluminum there would be no Teslas, the electrical vehicle that has captured the imagination of drivers around the world. Nor would the Ford F150, the highest selling light duty truck on the market, have made the advances in fuel efficiency that it did by lowering vehicle weight. Industry analysts predict over 550 pounds of aluminum in most motor vehicles by 2025 to promote fuel efficiency. Aluminum is infinitely recyclable, but the global demand will require us to continue mining bauxite for decades to come.

Iron ore is also essential to the clean-energy economy. Three hundred tons of steel go into every wind turbine tower and require 900 tons of iron ore to make the steel. Scrap steel is also recyclable and is the primary source of much steel in the U.S. today, but the domestic and global demand for steel, again, will require mining iron ore for decades to come. The notorious Tesla 3, the $35,000 “every person’s” electric vehicle, can’t be made profitably without using the high-strength, lightweight steel that can only be made directly from iron ore.

Lithium is the mineral that is mined from salt brine to make the batteries that are at the heart of current electric vehicle technology and the battery storage that is essential to expanding the deployment of solar power. There’s only one lithium mine in the U.S.; it’s mined primarily in the Lithium Triangle of Bolivia, Chile, and Argentina and shipped around the world.

Copper, which has been at the center of the recent debate over mining in Minnesota, has been an essential ingredient in industrial society since electrification. With many clean-energy strategies focused on electrification of the transportation industry, it’s inconceivable to do that without large-scale increased usage of copper throughout our economy. But consider one small fact. One large wind turbine today consumes 6,000-8,000 pounds of copper. Copper is also highly recyclable, but demand in the global clean-energy economy far outstrips available scrap. We will need virgin copper also for decades if we want to transition to a low-carbon economy.

The list could go on and on, from the silica needed to make high energy efficient plate glass to the Gorilla glass that Corning, Inc. is testing to put into automobiles to lower vehicle weight and improve fuel efficiency. It also includes metallurgical coal, an anthracite with specific properties necessary to make steel and other metal products. Approximately 10 percent of the coal mined in the U.S. is for metallurgical purposes, not for burning in power plants for electrical generation. Metallurgical coal is an absolute necessity for the clean-energy economy.

Essential to a low-carbon future

Mining is not a relic of the 19th century. It’s an essential feature of how we transition into our low-carbon future. For Minnesotans, this means imagining what a 21st-century mining industry should look like and then fighting to realize it. If we need iron ore to make the Tesla 3 or the wind turbines we need, then we should mine the ore in Minnesota to the highest occupational and environmental standards in the world. Nor should we let Brazil, China, or any other country undermine those standards.

If we need copper to electrify our transportation system and produce the renewable energy we need, we should be prepared to mine the copper to the world’s highest environmental standards, nor should we turn our heads and buy that copper from Antofagasta in Chile, Freeport-McMoran in Indonesia, and other parts of the world where we know that pollution is real and unchecked, that safety standards are minimal, and miners are paid a pittance of what they deserve.

Minnesota’s next elected leaders, the mining industry’s executives, union leaders and environmentalists have a choice to make. Imagine coming together to make Minnesota the global center for sustainable mining. We know we will need mining for decades. We need leadership now.

David Foster is a retired director of USW District #11 and founding executive director of BlueGreen Alliance.