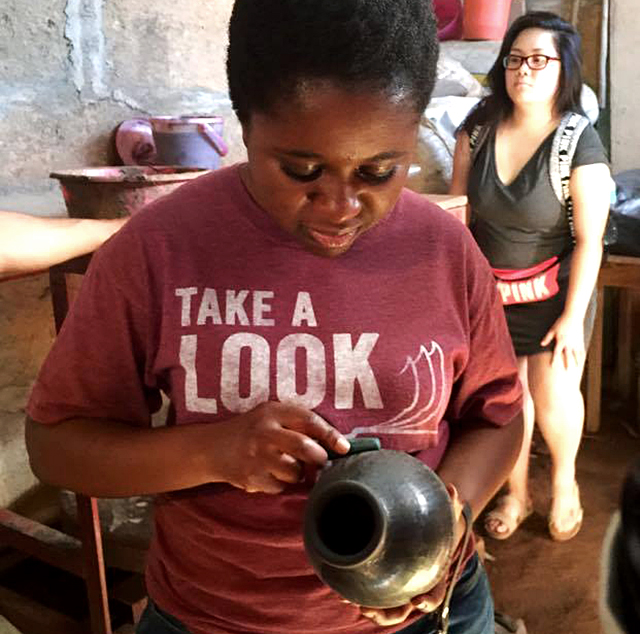 Photo by Peggy Johnson
Augsburg students at a craft studio in Masaya, Nicaragua.

The dream of an inter-connected world — where people meeting face-to-face can transcend cultural, economic and language barriers — never seemed more possible than when I saw an Augsburg University student play guitar for a roomful of expectant mothers in Nicaragua. His classmates on a spring break tour chimed in on a medley of Beatle tunes, with many of the Nicaraguan women humming along. The women returned the favor with a folk song about Nicaragua.

This cross-cultural moment occurred in the provincial city of Matagalpa at a villa that houses Casa Materna (“Mother’s Place”), a health care center for women from the countryside with high-risk pregnancies.

At a time when divisions across the planet are widening at an alarming rate, the simple act of people sharing some part of themselves with one another offers a genuine dose of hope.

For 15 Augsburg students, this was morning five of an eight-day crash course in Central American life — which included touring cooperatives, meeting social activists across the country, visiting craftmakers’ studios, and dancing under the stars at a lakeside club in the capital city of Managua.

As a reporter and travel writer, I joined the trip to observe how immersion in another culture changes people’s attitudes. But I returned home with personal insights all my own. The experience of spending several days with rural families at an agricultural cooperative in the rainforest — nearly all of whom live without running water, refrigerators, television, Internet, air conditioning or cars — hit me as profoundly as it did the students.

Despite the beautiful setting at the foot of towering white cliffs crowned with lush forest, there was no mistaking this place for Shangri-La. Patriarchal patterns were apparent, even with the cooperative’s stated goal of gender equity. The mother and oldest sister in the family I stayed with did not sit down to eat until all the men and children had finished their meals. And clambering up a steep, dark, muddy hillside at night in pounding rain to reach the latrine is an adventure I don’t need to replicate. But the interwoven sense of community among these families and the daily rhythm of life unfolding at its own pace, not driven by schedules, offered me a sense of new (actually old) possibilities for living each moment more fully.

‘I was terrified to come here’

The students had thoughts of their own:

• “We were in a different country far away, in the middle of the forest, in a stranger’s house, speaking a language we barely knew — and it was great,” announced a student sporting many tattoos. She marveled at the fact she was up before dawn making tortillas from scratch. 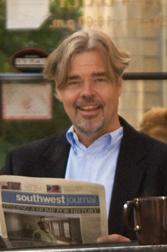 • “I was terrified to come here. I’d never even been camping before. Black people don’t camp!” said an older student. “But the family was so open to us — sharing everything they have. I want to be like that for other people.”

• “I’m just loving it because I am always so busy back in Minneapolis checking my phone, checking my email. I feel so happy here,” another student shared. “Last night all we did was talk!”

• “Being here made me think about individualism in America, and realize that you can’t get much done without other people,” said a student on her first trip outside the U.S., noting how the experience would influence a project she founded back in Minnesota, B.E.W.A.R.E! — which aims to help black women succeed in college. “I realized I can’t do it all myself!”

Trips like this, organized by Augsburg University’s nationally recognized Center for Global Education and Experience (CGEE), are not limited to Augsburg students — or even college students. Well-known travel guru Rick Steves occasionally joins CGEE trips, which he describes as “ Reality Tours … a constant barrage of thought-provoking experiences.” CGEE maintains base-camp offices in Central America, Mexico and Namibia, and in 2019 will expand to the Middle East, where Augsburg is piloting a partnership with Dar al-Kalima University in Bethlehem.

Preview of discontent with Sandinistas

In Nicaragua, our candid conversations with everyday people offered a clear preview of discontent with the governing Sandinista party that has overflowed in massive protests. Daniel Ortega — one of the leaders of the 1979 revolution who had been voted out of power in 1990 and returned as president after the 2007 elections — was described by some of the people we met as corrupt and hypocritical in his professed concern for the poor.

As a journalist I’ve often enjoyed inside access to experts and officials on my foreign travels. But this trip to Nicaragua reminded me that conversing with folks in their kitchens, workshops and community hangouts — even when language poses a struggle — is just as important as interviewing high-ups in making sense of the world. And more important for making the world whole.

Jay Walljasper, a former contributing editor to National Geographic Traveler and editor of Utne Reader — is the author of “All That We Share: A Field Guide to the Commons.”

Transcending barriers: At a time of division, cross-cultural experiences offer a genuine dose of hope