Imagine a mountain reaching a height of some 250 feet (almost as tall as the Statue of Liberty) containing wet sludge from an adjacent copper mine. Then add mercury and arsenic to this pile of waste and locate it just south of the Laurentian Divide in the basin of the St. Louis River, which flows into Lake Superior. One last addition: rain, and more so with climate change.

Most observers would quickly surmise that this is a prescription for disaster. Certainly, seepage or worse, a break, would occur and, ultimately, contaminate the river and Lake Superior.

But “no,” says state government. Tom Landwehr, who served as commissioner of the Department of Natural under Gov. Mark Dayton, declared that Minnesota has “extraordinarily rigorous environmental laws.” Those were the laws that were utilized in the permitting process for PolyMet.

Effects of PolyMet vs. Twin Metals?

Apparently, according to Landwehr, this process worked well for the PolyMet copper mining permit. However, he is now declaring that may not be the case for the Twin Metals mine, which would affect the Boundary Waters Canoe Area Wilderness (BWCA). On the face of it, this would appear to be a serious contradiction. And it is. 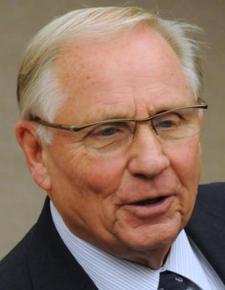 What has changed? The answer — Landwehr’s job; he is now the executive director of the Campaign to Save The Boundary Waters. And save those waters from what? Copper mining, of course.

We are led to believe that somehow mining contaminates flowing into the St. Louis River and Lake Superior are healthy, but when they move in the direction of the BWCA they become highly dangerous. We are further being told that the permitting process for the PolyMet mine was “rigorous,” but the same process is inadequate for the second mine.

This is truly frightening. According to my dictionary, environment means “the air, water, minerals, organisms, and all other external factors surrounding and affecting a given organism at any time.”

Interestingly, Landwehr offers no definition of what the permit review covered. However, it proves the point that if you torture a word long enough you can obtain whatever meaning you want. That is precisely what has happened here.

Clearly, a determination was reached that the PolyMet mining permit was to go through unimpeded and that directive had to come from the governor or the commissioners. Either way, the process was fatally flawed. To Landwehr’s credit, he is now alerting us. It is safe to assume that as the movement to preserve the BWCA gains steam, more will come out — including the likelihood that Dayton gave in to the Iron Range legislators on copper mining in gratitude for their support in the 2010 DFL primary.

What would Willard Munger do?

However, what is important here is to immediately set in motion a plan to bring back the PolyMet permits for review and place the entire review process on hold until this operation is properly functional. Perhaps the best model would be one that asks the question, “What would Willard Munger do?”

By way of background,  Munger was a legislator from Duluth who served as chairman of the Minnesota House Committee on Environment. He was gruff and blunt with a tenacious commitment to the environment. Neither political loyalty nor intimidation from a higher office would ever deter Munger. For some 30 years, he and PCA Commissioner Grant Merritt shaped our environmental policy and successfully took on the taconite industry.

Having served with Willard Munger in the Legislature, we suspect he would urge us to do the following:

1. Direct the attorney general to institute legal action to halt the current mining operations until a thorough review of the permit process is completed and deemed to be thorough and protective of our total environment.

2. Review the recent mining disaster in Brazil, where a sludge dam similar to the one proposed for Minnesota broke, killing an estimated 200-300 people and destroying the area. This should also include the recent evacuation order that was issued by Brazilian authorities who fear another dam break.

3. Study the mining impacts which caused El Salvador to ban certain types of mining. It should be noted that there is a growing fear of serious shortages of drinking water due to contamination.

4. Direct the Legislative Auditor to conduct a thorough study on the following:

a. A comprehensive health study utilizing the services of the Department of Health and the University of Minnesota.

b. A thorough review of all phases of economic impact, including the issue of indemnification, job loss due to contamination, and all concerns that relate to long-term financial health.

Since jobs are at the heart of this, a possible compromise would be for Gov. Tim Walz to transfer some state function to northern Minnesota. The state employs more than 36,000 people. The DNR alone has over 2,700 employees. Certainly, something along that line could be worked out rather than proceeding to destroy our state’s most precious physical resources.

Fortunately, on the national level, Rep. Betty McCollum is using her seniority most effectively to block irresponsible mining. And, increasingly, our new Rep. Dean Phillips is stepping up and assisting. Here, in Minnesota, state Rep. Alice Hausman has been a stout environmental supporter and is increasingly getting help from Rep. Jim Davnie.

But, more than anything else, competent and bold leadership is needed from the governor. We know the permitting process has been severely compromised. We must pause and review what happened. Our water, be it at the BWCA or in Lake Superior, is our most vital resource and defines the livability not only of all the communities and tribes in the area but the Upper Midwest as well. That area is entitled to a healthy economy and that can be established without building mountains of poisonous sludge that place our water supply in immediate danger.

Our prayer is that Gov. Walz will lead the call of prudence and act now.

Arne Carlson is a former governor of Minnesota (1991-1999). Janet Entzel served as a state representative from Minneapolis, 1974-84, and was assistant commissioner of the Department of Corrections, retiring in 1999.