This last winter was long, icy and cold. Last week, the temps finally started to climb back into the normal zone. An eternal optimist, I started to wear my Costco Capri pants and my Duluth Trading Company long-tail T-shirt, thinking this act might force spring and then summer to come more quickly. 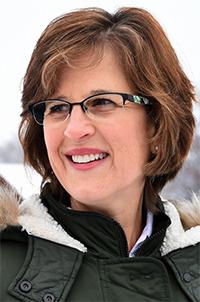 At our home, we have a back patio that we put in several years ago for one of the great rites of passage for kids in Minnesota – high school graduation. Families spruce things up around the house – painting, carpet cleaning (if you have carpet), and taking on projects that you never got to because of all the time you put into fundraisers for the Boy Scouts, the High School Drumline, the PTO, and even a levy-referendum campaign.

My husband and I decided to invest in landscaping for our celebration. Even though we had the money to pay for the work, it almost felt wrong at the time. We had designed and built our house. We were used to putting in labor to pinch pennies. We knew how to do the work, but we went big and paid Abrahamson’s to design and install the landscaping, which included a new approach to our garage and a back patio made out of red pavers. We also had two maple trees planted by the new patio to give us some shade so we could sit out there comfortably in the summer.

For our son’s graduation party, we had a build-your-own taco buffet in the kitchen. I cooked up so many delicious different fixings. You could carry your food outside through the new French doors from the kitchen to the shiny new patio. The party was a great success and our son went off to college and graduated in four years. I think the patio was a great way to send him off into the world.

So while the purpose of the patio was to celebrate a rite of passage with the community and family, the patio has since taken on a life of its own and I have a front-row seat to the magic that plays out there.

As I was drinking my coffee the other morning and staring out the French doors at our 6-year-old maple tree, I spotted an odd sight. All of the woodpeckers filling the tree were something I was used to observing. They line up to eat suet out of the basket that hangs from our green shepherd’s hook. No, what was different that day was a squirrel – a red squirrel in our tree. We just don’t see squirrels at our place. This little one was running up and down the trunk of the tree with its tongue shooting out at lightning speed against the bark as it ran.

I love photographing nature, so I grabbed my iPhone to capture the moment with a video. As I was focusing in on the squirrel by tapping its image with my finger on the screen before I started shooting, I saw that the tree was weeping. It looked like tears were falling from several branches at about a drip per every three seconds. They sparkled in the sunlight – liquid diamonds. I was confused – it wasn’t raining, and the snow had already melted and had been gone for days.

Once the squirrel moved on, I had to explore why the tree was crying. Upon further inspection, I saw that the bark was popped open in several spots on the branches. It was dripping sap – sap flows when you have freezing temps at night and above freezing temps during the day. I had never seen this.

The next morning, as I returned from the barn after feeding my animals, I just had to stop at the tree. In the morning sun on the east side of the trunk, I could see glistening trails of amber flowing down its graceful trunk. Out of curiosity, I touched my finger to one of the trails and licked it. Nothing — it was dry.

I had to do it. I went in, tongue out, and I licked the dried trail. To my surprise, it was sweet and delicious! It warmed my insides with pure joy. It was maple syrup that had dried in the sun on the tree.

That squirrel came quite a ways to find our tree, somehow knew that it was sapping, and was in pure ecstasy as it lapped it up. I was privileged enough to witness the whole thing occurring by the patio. Spring has sprung!

Rebecca Otto, of Marine, is a former Minnesota state auditor.