The first ship that brought slaves to what is now the United States arrived at the colony of Virginia in 1619. On this 400th anniversary without reparations, apologies, or prosecutions of the perpetrators, we might pause to reflect on efforts that have been made to find justice.

One of the most ambitious attempts to critique racial inequality in the U.S. occurred in 1951 when an organization called the Civil Rights Congress (CRC) accused the government of complicity against African-Americans. The intent of the CRC was to present its case to the United Nations and to create international awareness of U.S. culpability for the brutality of slavery and discrimination.

The goal was clear, as stated in the document: “It is our hope, and we fervently believe that it was the hope and aspiration of every black American whose voice was silenced forever through premature death at the hands of racist-minded hooligans or Klan terrorists, that the truth recorded here will be made known to the world; that it will speak with a tongue of fire, loosing an unquenchable moral crusade, the universal response to which will sound the death knell of all racist theories.”

The document addressed to the United Nations was titled “We Charge Genocide: The Historic Petition to the United Nations for Relief From a Crime of The United States Government Against the Negro People.” It placed the responsibility for a genocidal situation on the U.S. government.  The CRC cited more than 3,500 recorded instances of lynching in the United States, pervasive and insidious legal discrimination, and systematic inequalities in health and quality of life, all with inarguable evidence.

The document quotes the U.N.’s definition of genocide, “the deliberate intent to destroy, in whole or in part, a national, ethnic, racial, or religious group,” and concludes that “the oppressed Negro citizens of the United States, segregated, discriminated against, and long the target of violence, suffer from genocide as the result of the consistent, conscious, unified policies of every branch of government. If the General Assembly acts as the conscience of mankind and therefore acts favorably on our petition, it will have served the cause of peace.” 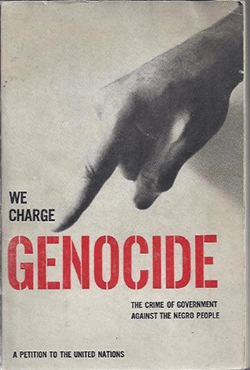 Unfortunately, “We Charge Genocide” struggled to see the light of day.

On Dec. 17, 1951, the document was presented to the United Nations at two separate venues. Paul Robeson, a world-renowned concert singer and activist, together with other prominent people who signed the petition, handed it to a U.N. official in New York. William L. Patterson, executive director of the CRC, hand-delivered copies of the petition to a U.N. delegation in Paris. Patterson had previously mailed 125 copies to Paris, but those copies never arrived after allegedly being intercepted by the U.S. government. However, Patterson was able to distribute other copies that he had wisely shipped to private individuals’ homes.

Because the CRC had communist affiliations, the worldwide communist movement fueled attention to the document. The U.S. anti-communist position was very strong during this ‘Red Scare’ period of the late 1940s and 1950s, and to avoid culpability for the crimes carried out against the African-Americans as well as to stem pro-communist sentiment, the U.S. government pulled out all stops to keep the document from public scrutiny.

The American delegation to the U.N. also criticized the document heavily. Given the strength of the United States’ influence on the U.N. and American vociferous denial of culpability in the treatment of African-Americans, this was only to be expected, and the United Nations never even acknowledged receiving the petition.

“We Charge Genocide” did receive international media attention, particularly in Europe, because of the striking examples of the shocking conditions for African-Americans, and of course because it raised very negative perceptions about America around the world. In the U.S. it was ignored by the mainstream press except for the Chicago Tribune, which called the contents “shameful lies.” Communist journalist I. F. Stone was the only white American reporter to write favorably of the document.

The CRC ultimately disbanded in 1956, the document never having reached the desired goals. Despite the CRC’s demise, the document is credited with popularizing the term “genocide” among African-Americans. Malcolm X and the Black Panther Party generated renewed interest in the document, and “We Charge Genocide” was republished in 1970.

In the 1990s allegations of genocide were brought forward again in relation to the disproportionate effects of crack cocaine and HIV/AIDS on African-Americans in the United States. The National Black United Front petitioned the United Nations in 1996, directly citing “We Charge Genocide” and using the same slogan. Their petition begins:

Declaration of Genocide by the U.S. Government Against the Black Population in the United States.

Whereas, we the undersigned people of African ancestry understand that the proliferation of the distribution and sale of crack cocaine has reached epidemic proportions, causing serious harm to the African community in the United States. Therefore, we understand that this harm can only be described as acts of genocide by the United States government … Acts of genocide can also be attributed to the Government’s use of taxpayers’ resources to wage war on a segment of the U.S. population. This is evidenced by the following: (1) cutting back on welfare; (2) privatization of public housing and land grab schemes; (3) privatization of public education; (4) racist immigration policies; (5) privatization of basic health care; (6) building prisons and the expanding incarceration of millions of African and Latino youth.

The U.S. has had a fraught relationship to the Genocide Convention since its unanimous U.N. passage in 1948. It was highly unpopular with the American government because of responsibility not only for U.S. treatment of African-Americans but also for potential charges of genocide perpetrated on indigenous peoples. “We Charge Genocide” became a political tool in arguing that the Genocide Convention could be used against the interests of the United States. There was strong government opposition to supporting the Convention.

For a U.N. convention, resolution or treaty to become the law of the land, it must be ratified by 67 “yes” votes in the U.S. Senate. Although the Genocide Convention was ratified in the U.N. in 1948, it was ratified by the United States Senate 40 years later, and then only because of the efforts of the late Wisconsin Sen. William Proxmire. He gave 3,211 speeches on the floor of the Senate, a speech a day for 19 years, until it finally passed, and by then it was filled with so many conditions and caveats that it was rendered almost meaningless.

President Ronald Reagan signed it into law in a hangar at O’Hare Airport on a rainy day in November 1988, an ignominious moment in the long saga toward accepting some responsibility.

The legacy of African-American slavery and genocide is inarguable: inequity in housing, education, health care, employment, criminal justice, politics, the recently reported huge disparities in African-American women’s maternal mortality rates – every sphere of life carries slavery’s stain. The U.S. sandbagged the CRC in 1951; right-wing groups today are even protesting commemoration of the 400th anniversary of slavery; and racial inequity remains pervasive, intractable, and shameful. We must acknowledge this crime, which would be the first step toward justice. We charge genocide.

Ellen J. Kennedy, Ph.D., is the executive director of World Without Genocide at Mitchell Hamline School of Law.

‘We Charge Genocide’: Still, no justice