“I always saw the public arena as a massive classroom.” — Hy Berman

Today would have been Hy Berman’s 95th birthday and, so, an appropriate moment to celebrate the value of understanding history.

Hy’s personal story was the foundation on which he built his scholarship and his preference to translate history for the masses through public television, radio and newspaper columns, rather than through esoteric academic journals.

That’s not to say his labor history, his work on antisemitism in Minnesota, his commitment to multiculturalism, and his pioneering scholarship on immigration on the Iron Range were not profound contributions to the academic literature and to the University of Minnesota, where he taught for more than 40 years.

It is to say that on this day – nearly five years after his death – it feels more Berman-like to recognize his devotion to sharing history to those of us who operate in his massive public classroom.

Hy was born into and embraced the socialist milieu of early 20th century Yiddish-speaking New York. His diaper was as red as they come, with Polish immigrant parents; a father so left-wing he was tossed out of his left-leaning clothing workers union; his mother so radical she was to the left of his father.

From an early age, his family celebrated May Day more than the Jewish high holidays. He spent his summers at Communist-leaning Camp Kinderland, a training ground for the children of leftist parents, and went on to become a counselor there. That summer job led to his mention by an informer before the House Un-American Activities Committee.

But, as time wore on, as he became aware of the tyranny and antisemitism of the Soviet Union, as he married and dived into his career, Hy shunned the “false god” of Communism. He became a New Deal zealot and a colleague and comrade of, among others, Minnesota Gov. Rudy Perpich and U.S. Sen. and Vice President Hubert Humphrey. 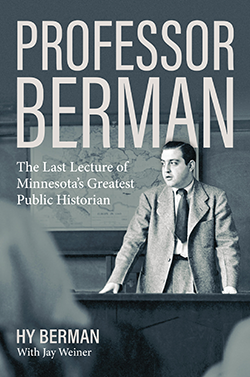 His actual classroom on the U campus was not merely about facts, but about context.

“People have often asked what do I feel are the key lessons or insights that I wanted to deliver to my students or have them leave with from my class,” he said. “What I would like them to have is, perhaps, an approach — if you want to be fancy — about the methodology. What I’d like them to have is the ability to see the present in terms of the development of their own society’s past, to be able to have some kind of an understanding that the world didn’t begin with their birth, and that the problems that they face have been cumulative and the society in which they live has been cumulative.

“Because I didn’t go into the classroom with a view that I knew exactly what happened. I don’t. Nor did I want to go into the classroom with the certitude of a definitive theoretical construct about where we are and how we got here. What I liked them to come away with is the ability to think critically by using historical materials in order to understand their present condition.”

Of course, in the public arena, he mostly made his celebrity mark as the entertaining, encyclopedic, avuncular historian on TPT’s “Almanac.” But, to me, he scored his most impressive public victory on a lesser-known stage, in his 1977 “Policy Speech on History and Heritage” that he wrote for Perpich, his longtime pal. They met in Hibbing soon after Hy joined the U faculty in 1961 and when Rudy was a dentist and an aspiring Iron Range politician. Their friendship grew so that when Perpich became governor, Hy became part of his kitchen cabinet and occasional speechwriter.

Perpich may have spoken the words, but Hy’s passion for the impact of history fill every sentence, and those sentences ring as true today as they did four decades ago.

“My concern and interest in our history is long and deep,” Hy wrote and Perpich said. “I have seen an immigrant generation and their children become productive and contributing Minnesotans. I have seen their struggle to maintain their own heritage, and place it alongside the cultures of other ethnic groups to create a genuine American society.

“I have experienced and deeply felt the need of immigrants and of my own generation not to be shunned, nor swallowed up by an earlier established culture.

“I have seen and participated in movements for the inclusion of all human experience into our historical record and have come to appreciate the need for constant re-evaluation and openness.

“History is not only a classroom or archives exercise, or a subject taught by the coach. It is not the sole possession of the super patriot or of the intellectual. We all are a part of history and history is a part of us.

“The struggles of our ancestors, the sacrifices they made to achieve a better life for all of us, should have prepared us long ago to expect that newer groups in our society would make similar demands and with the same justice. Exclusionary policy leads to divisiveness, disunity, and disorder.

“A better understanding of our past would have cushioned the stresses of the last decade when women, minorities, and the young insisted upon their rights to be fully included in our culture. But the lessons of history are learned only when knowledge becomes a familiar part of our daily lives and thoughts …

“The relevance of history to today’s world has been widely questioned. Some argue that the traditional interpretation of American history is, in fact, only the history of the dominant ethnic group — or a glorification of the lucky winners in a vast free-for-all of exploitation that we have traditionally looked upon as building civilization in a wilderness.

“In meeting the challenges posed by a new generation of relentlessly honest young people, we must be prepared to look at the past through fresh eyes. We may be startled at some of the insights that appear if for a moment we reverse our field of vision and look at the story of a town, county or region through the eyes of its vanquished.

“History is a humanized force in our increasingly impersonal and technological world. … A community without a knowledge of its past is like a person with amnesia. It can exist and function from day to day, but its lack of memory leaves it without a feeling of purpose, direction, or identity.

“A sense of history is recognizing the influence of the past in the very web of our daily lives — in our habits of thought and speech, in the streets we walk through, in the ways we earn a living. It is in the touch of humility that comes with knowing that wherever we are in life, we stand upon the shoulders of those who have gone before.”

To which I can only say, “Happy birthday, Hy.”