On Jan. 25 I listened to reports detailing NPR reporter Mary Louise Kelly’s interview with U.S. Secretary of State Mike Pompeo, including his misogynistic, verbally abusive behavior following the interview. I was incredulous.

Little did I know that a few hours later I would be equally incredulous witnessing the toxic behavior displayed by Jason Lewis at a public meeting in Ely, watching in disbelief as the atmosphere grew increasingly toxic the longer he spoke.

Lewis, having lost his seat as Minnesota representative for U.S. Congressional District 2, has now set his sights on one of Minnesota’s U.S. Senate seats. He showed up in Ely for a “meet and greet” session, bouncing from District 2 to District 8.

Inciting incivility is not leadership

At the meeting advertised and supposedly designed for residents to learn about his views, while also giving them the opportunity to tell him their concerns, Lewis displayed the most bizarre behavior by a politician that I have ever witnessed.

He had obviously come to engage copper-nickel sulfide (sulfide) mining proponents, and to do everything in his power to shut down those with a pro-water view. Not only did he repeatedly refuse to give a civil, well-spoken businesswoman from our Ely community the opportunity to express her concerns for our waters, he continually ridiculed her, and by his actions encouraged mining supporters to applaud his increasingly misogynistic behavior.

It did not take long in this atmosphere of deliberately escalated rancor for a male member of “Fight For Mining Minnesota” to jump up from his chair yelling, turn around, and hulking over the woman, to verbally attack her — venomously spewing that everything she had to say was “expletive.” By his silence, Lewis gave his tacit approval.

It was a particularly hypocritical question in the first place because Lewis apparently did not care about either watershed. His question was also a classic example of an individual who is ill informed — or has no legitimate answer — so turns it back on the questioner, or the interviewer, shades of Pompeo.

Lewis needs to remember that the purpose of meeting potential constituents is to listen to everyone’s concerns, whether in agreement or not, and to do so respectfully. It is one way to learn the nuances of any issue.

The issue of buffers

Lewis mistakenly agreed with mining proponents, asserting that the BWCA was adequately protected by buffer zones — part of federal legislation enacted in 1978 — including the area where Antofagasta proposes to mine with the Twin Metals project.

In the 1978 BWCA Act, the Mining Protection Area included the Gunflint Trail, the Fernberg Road, the Echo Trail, and a thin buffer west of Burntside Lake and north of Lake Vermillion. There was no federal protective buffer zone designated along the southern/southwestern boundary of the BWCA. Highway 1 and Spruce Road areas — where Antofagasta and Teck Resources (Teck) are proposing underground and open pit mines — are without a federal BWCA buffer zone. 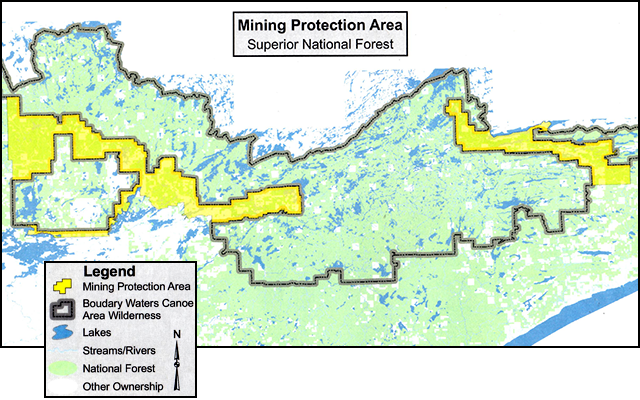 The industry slogan, “Minnesota can have mining and clean water,” is the biggest myth of all. Take a look at the “Map to the Iron Mining & Metallic Mineral Exploration Mapset.” [PDF]

What chance do our waters have? None. Neither do future generations of Minnesota’s children who would pay — with damaged health and intellect — for the blind acceptance of disinformation, lies of omission, and corporate greed. Minnesota’s defining moment is now.

Here’s an alternative mantra: “We need these waters.”


WANT TO ADD YOUR VOICE?