The American Great Recession, officially 2007 to 2010 but with setbacks extending far beyond, changed firm and employment structures of our state and local economies quite markedly. Depending on how rapidly we emerge from this current plague of sorts, jobs and businesses will endure a similarly extended recovery period, with the smallest companies at greatest risk. 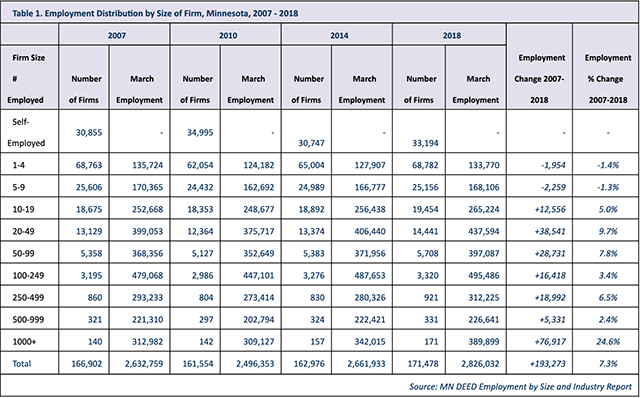 Over the whole recovery period, Minnesota’s smallest businesses, with 1 to 9 employees, fared the worst, shedding 1.4% employees.
In contrast, the largest of Minnesota’s firms fared best in the “great recovery.” Companies in the 20- to-499 employee range recovered well over the period, all size groups within that rage adding at least 10,000 jobs over the decade. Companies ranging from 20 to 49 employees added the most jobs of any group, more the 38,500, though they, too, laid off nearly 25,000 workers from 2007 to 2010. The 140 firms with more than 1,000 workers in 2007 collectively added the most jobs, 76,917 over the 2007-17 span, outpacing all other size groups by more than double the rate, 27%. Statewide, the highest recovery rates occurred among the mid-sized range firms, those with 10-99 employees, and in firms with over 1,000 workers in 2007, adding almost 77,000 jobs, a period growth rate of almost 25%.

Were the job losses by company size similar across regions? No. For the same 2007-2018 period, the Twin Cities metro lost 8.7% of its smallest businesses (1-4 employees) compared with northeastern region losses of 13.3%.

What about job losses and gains overall among our regions? The northeastern region had barely recovered its 2007 job totals by 2018: up just 1.6%. Its six firms with 1,000+ employees added more than 3,000 jobs together, a job growth rate of 28%. In Minnesota’s northwest region, significant recovery occurred among medium-sized businesses, accounting for much of that region’s net job growth rate of 7.9%. In addition, four firms with over 1,000 employees in 2007 added jobs as well.

Southeastern Minnesota lost 11% of its smallest businesses over the period, for a sluggish overall growth rate of 5.2%. Southwestern Minnesota lost more than a thousand jobs in firms with 1 to 9 employees, but added nearly 2,900 jobs in firms with 10 to 99 workers. But its firms in the 100-to-999 range cut more than 3,200 employees. Despite modest growth of very large firm workforce in the region, its net employment gain from 2007-18 was slightly below zero. Central Minnesota added a net 6.2% jobs over the period, despite losing more than a thousand jobs in the smallest business groups.

Not targeting the poorest, most needy in 2020

What happened during the Great Recession will not necessarily predict what will happen in our current, abrupt and unsettling COVID-19 crisis. The earlier one was a financial crisis, precipitated by reckless financial machinations collaborated in by the largest banks, mortgage companies and Wall Street in the prior decade. This recession is entirely different, the result of a startling and rapidly spreading disease that requires us to shut down large portions of our economy to save lives. I believe it is working, and I oppose a premature end to social distancing and home confinement.

Many of the policies that our state and federal governments have put in place are welcome, although not every deserving Minnesotan will be reached. The small-business forgivable loans, the rapid broadening of unemployment compensation, and the stimulus checks are helping stave off a deep collapse. However, we are not targeting the poorest and most needy among us: the homeless, those without medical insurance, low income renters who cannot pay their rent, the landlords of the latter group, and those lower-income students completing high school and college this spring who must support themselves and may also shoulder significant educational debt.

Ann Markusen is a retired University of Minnesota political economist and resident of Red Clover Township, Carlton County. She thanks Carson Gorecki of Minnesota’s Department of Employment and Economic Development for data and interpretive support for this research.