An old adage maintains that the first step to solving a problem is admitting that you have a problem. When it comes to closing the gap in health disparities, it’s time for Minnesota to take that step.

The U.S. Census Bureau reports that in 2019, 4.9 percent of Minnesotans didn’t have vital health insurance protections. Nationally, the uninsured rate is 9.2 percent, so the Minnesota figure makes us the envy of 45 other states that are struggling with worse insurance coverage.

It’s easy to be complacent, to congratulate ourselves and act as if there is little to no additional work left to be done in Minnesota.

But that statewide rate isn’t the full story.

When you drill down into various regions of Minnesota, you find a number of so-called “health coverage deserts,” areas where the rate of uninsurance is significantly worse than the statewide average.

A new map analysis developed by the University of Minnesota’s State Health Access Data Assistance Center (SHADAC), with funding from the Blue Cross Blue Shield of Minnesota Foundation, illustrates the uninsured rate at the state senate district level. The regional picture is more disturbing, and it demands attention. 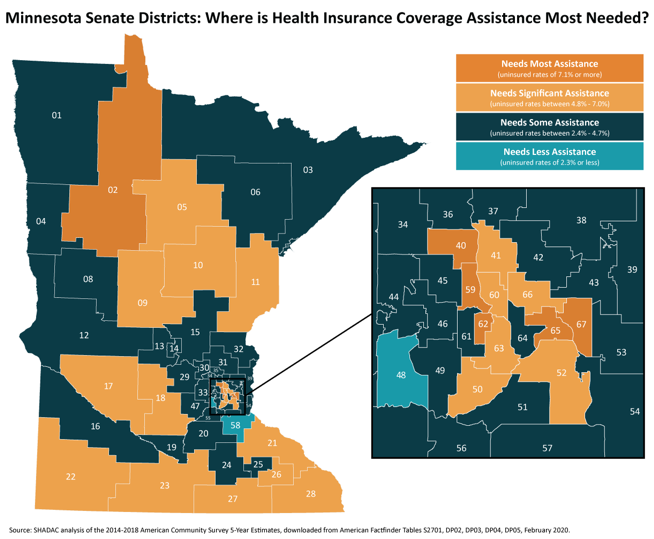 We can’t turn a blind eye to their struggles.

In addition to regional disparities , there are significant racial and ethnic disparities.  While the uninsured rate for white Minnesotans is 3.8 percent, it is 19.6 percent among Hispanic or Latinx (of any race), 17.1 percent among Native Americans, and 7.6 percent among Black and African Americans. That’s unacceptable.

And the problem is actually worse than that. These numbers are pre-pandemic.  We know many Minnesotans lost access to their health coverage when they lost their jobs due to the pandemic, so these numbers are likely significantly understated.

So what do we do about it? Nonprofit organizations like Portico Healthnet are working across Minnesota to help people navigate the healthcare system, but they need help from policymakers.

First, federal, state, and local leaders should invest significantly more funding in providing health coverage outreach and enrollment assistance. The health insurance environment is extremely complex, and people from all walks of life need expert help to understand and navigate that complexity.

Investing a little in outreach and enrollment assistance now saves a lot in the future.  People who have health insurance are more likely to get treated when and where the care is more effective and less expensive, such as in a primary care clinic instead of a hospital emergency room.

Second, we should use these data to target outreach and navigation help to the areas and populations that need it the most.  We can’t have a scattershot approach, or a one-size-fits-all approach, because the challenges in each community are unique.  For example, in areas with large Native American populations, misunderstandings about the role of the Indian Health Service (IHS) often need to be addressed in outreach messaging.

The good news is that affordable insurance is available to Minnesotans. Currently, about 83 percent of Minnesotans lacking health insurance have incomes that make them eligible for free or low-cost health coverage through Medical Assistance or Minnesota Care, or eligible for federal tax credits to purchase a private plan on MNsure.org.  But the reality is, people need experts to guide them through the process.

Again, the first step is to admit that we do have significant problem areas in Minnesota. Then we need to demand much more leadership and action at the federal, state and local levels to fix the problems.

Meghan Kimmel is president of the St. Paul-based Portico Healthnet, a nonprofit organization working to reduce the number of Minnesotans without health insurance.