The Minnesota Republican Party won back control of the state House in last week’s election by taking 11 seats formerly held by DFLers — all of which, save one, were in districts outside the Twin Cities metro region.

But while it’s true that Republicans captured the House by winning a lot of votes in rural Minnesota, it would be a mistake to conclude from the results that Greater Minnesota is monolithically Republican.

Why? Because GOP candidates won their seats by a smaller margin, on average, than Democrats did. In other words, while rural districts certainly lean Republican in Minnesota, they’re far less reliably Republican than the urban, Democratic-leaning districts in Minnesota are reliably Democratic.

To illustrate the phenomenon, lets look at this chart showing the margin of victory for each of Minnesota’s 134 House races: 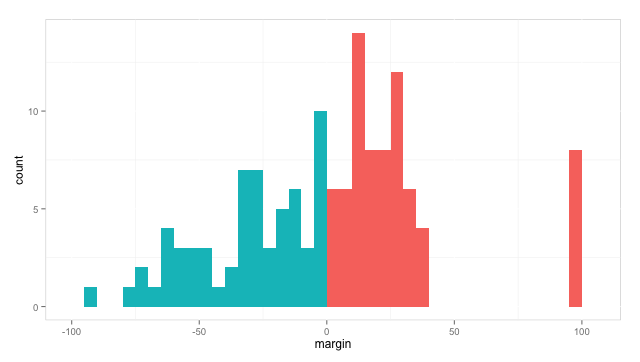 The horizontal axis represents the various margins of victory for Minnesota House races, with the right side (the red bars) being those seats won by Republicans. With the exception of the eight seats on the far right side, which represent candidates who ran unopposed, Republican margins are grouped pretty tightly, and relatively close to the center. All were by less than 40 points, and the median (meaning half of Republicans won by less, half by more) was 18 points.

Democrat margins are more spaced out, with a number of seats that were won in blowouts of 50 points or more. Many of these extremely safe DFL seats are located inside the Twin Cities, and they help push the median DFL margin of victory up much higher than the GOP’s median, to 29 points.

This dynamic is not isolated to this election, but rather a pattern that has repeated over the last couple cycles of Minnesota House elections. Take a look at a similar chart showing margins of victory in the 2012 election, when the DFL won the House 73-61. The distribution looked like this: 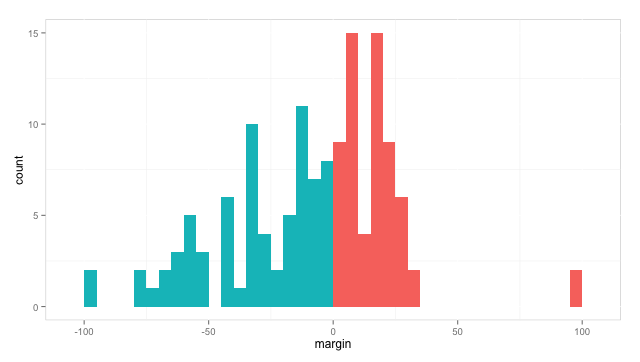 Again, the Republicans, on average, tend to win by smaller margins than Democrats. The median GOP margin of victory in 2012 was 15 points; for the DFL it was 28 points. 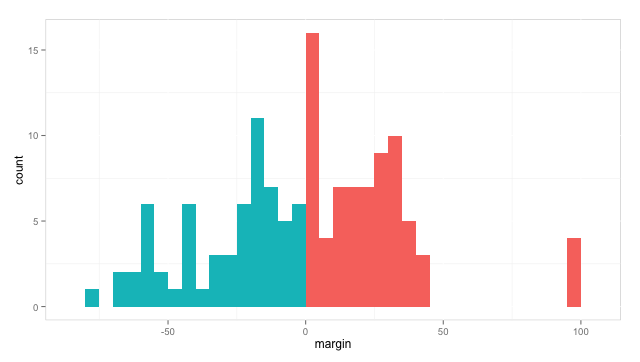 Here the median Republican margin of victory was 19 points (with quite a few races won by 0-5 points) and the median Democratic margin was 21 points.

So while Republicans gained control of the House by winning more votes in more districts, the races they won tended to be closer. And while those heavily DFL districts might make for easy re-election campaigns, they also pile up a lot of votes that don’t do much for the ability of the DFL to win control of the House.