The Minneapolis street grid: it’s a beautiful thing. By just memorizing a few key alphabetical names of town notables (in South and North Minneapolis) or presidents (in Northeast), you can have a pretty good idea of how to get from point A to point B in the city.

Just how rigid is the grid? The map below shows all the streets of Minneapolis, colored according to their grid orientation: 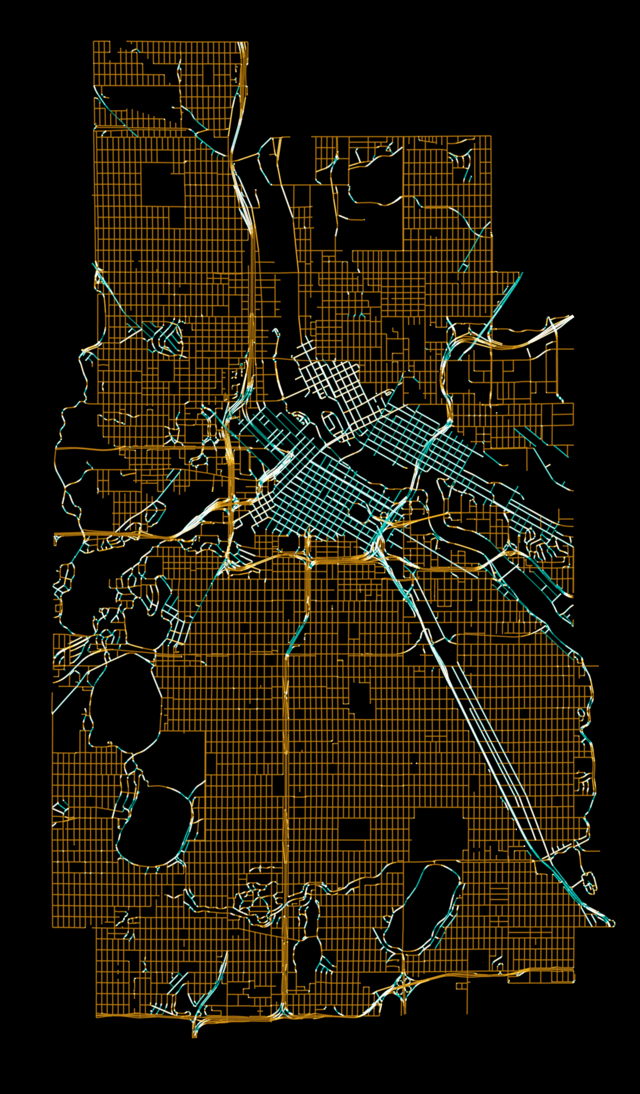 Most streets, colored orange in the map, hew strictly to the main north-south grid. The obvious exception is Downtown and its across-the-river neighbor Marcy Holmes (colored teal), where the grid is rotated about 45 degrees to roughly parallel the banks of the Mississippi. There’s also a pocket of off-north-south grid in the southwestern part of Northeast, also apparently influenced by the river. But everywhere else in Minneapolis, excepting lakeshores and the aberrant Tangletown, the orientation of the grid is the same.

In this Minneapolis is similar to other planned cities, like Chicago, which you can see in this map by Stephen Von Worley whose work, along with Mathieu Rajerison, inspired this post. Von Worley mapped several major cities. Older cities, which may have grown in historical spurts without being carefully planned out, make for more interesting maps: check out Boston.

Note that, due to programming issues beyond our control or comprehension, the colors are not perfectly accurate. But the idea is definitely there.

The beauty of Minneapolis’ grid

By Alan Palazzolo and Tom Nehil