I imagine my grandma was like Mary Tyler Moore, a single woman living in Minneapolis, making it after all in the wake of a divorce, when divorce was still taboo in the ’70s.

All my life, I heard about “The House on Emerson,” which she bought for a song and lived at in south Minneapolis at that time. It was the source of fond memories for her big family: getting everyone together in the dark wood-paneled dining room; watching Timothy the cat traverse a ledge that wrapped around the outside of the house so he could peer into bedroom windows. The house had a basement room where opening a cabinet led to smaller and smaller cabinets. This delighted my sister, who remembers being a little kid at the house.

Those are the stories my family told about the house on Emerson, but there’s a whole other set of stories out there: the stories contained in public records. A recent class on researching house history put on by Preservation Alliance of Minnesota, the Minnesota Historical Society and the Logan Park Neighborhood Association gave me a whole new perspective on grandma’s old house.

Here’s what I learned, and how you can learn about your old house. (This is specific to Minneapolis, but with tweaks, much of the research could be applied to other places in Minnesota. Not everything’s available online, so it does take some running around to various history museums and county buildings.) 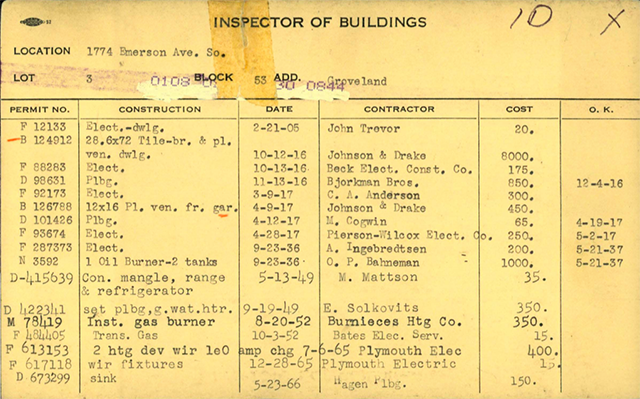 That’s according to a building permit index card. For houses in Hennepin County, these can be found in digital form on the Hennepin County Library website. They cover the years 1884 to 1972, and give a pretty good idea of building permits for the house, additions, maintenance and repair. They also include the names of contractors and the cost of the work. As the card shows, this house was built with electricity and plumbing, and appears to have gotten a refrigerator in 1949.

You have to go in person, but you can find many of the permits themselves on third floor of Hennepin County’s Public Service Center at the city’s’ development review kiosks.

If you grab the permit number from when the house was built (in this case, as you can see above, B 124912), you may be able to find the original lot survey. These are kept in a drawer on microfilm at the Minneapolis Central Library on the third floor, and cover the years 1916 to 1965.

The lot survey gives a rough outline of the land and the house. In this case, it includes the name of an owner, Charles Olson. 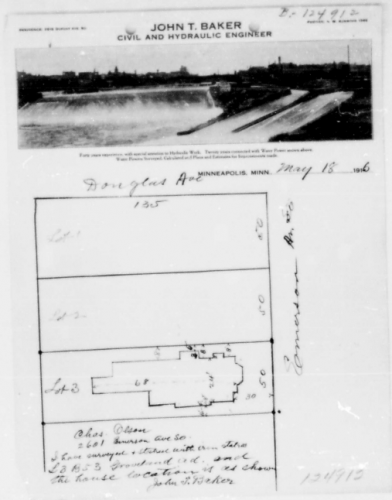 I searched for Olson’s name along with the address on Google and found a heritage preservation report that mentioned the house and named the architect, Chapman and Magney. Another search showed that this was the firm that did Grace Evangelical Lutheran Church, near the U (makes sense, there’s a strong resemblance) and that Magney was part of a firm that did the Foshay tower. The house is considered a Tudor revival.

There’s more about Olson and the other people who lived in the Emerson house and what they did for a living in digital city directories available online through the Hennepin County Library 1859 to 1922. More directories for Minneapolis and other cities are available in physical form at the Minnesota Historical Society’s Gale Family Library.

A 1922 copy shows this Charles Olson, one of, oh, 30 or so men by that name in Minneapolis at the time (this is Minnesota, after all), working at a firm called Charles Olson & Co. He was a watchmaker.

The Minnesota Historical Society also has directories with descriptions of socially prominent people in their library.

Who else owned the house? Information on ownership can be found with the help of documents on the fifth floor of the Hennepin County Government Center at the recorder/registrar of titles office. Courtesy of Hennepin County
Tract index for the Emerson block

This document, a tract index, shows documents listed, including mortgage information, for the houses on this development block. For more info, you can request the referenced documents.

You might be surprised to find photos of your house tucked away in the files of some archive or other.

The Minnesota Historical Society has a card catalog listing photos of Minneapolis properties. If you email the Hennepin History Museum, they can tell you whether their archives contain any photos of your house. Part of their archive is old realtor photos, so pictures of all sorts of houses can be found there. That’s where I found the 1929 photo of the Emerson house at the top of this story.

Both the Hennepin County Library and the Minnesota Historical Society have digital photo and newspaper archives that might shed light on people, houses and neighborhoods. (In the former, I found my grandma’s picture in the 1939 Washburn High School yearbook).

If you’re wondering what the lot you live on looked like in the past, maps might be the place to look. There are all kinds of historical neighborhood maps at the Minnesota Historical Society, including Sanborn maps, created for insurance purposes. These maps are also available in physical books at the Hennepin History Museum. 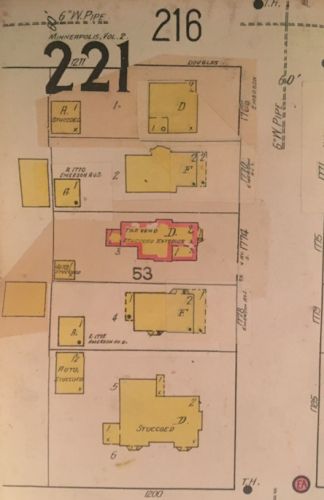 Used with permission of EDR
Sanborn map, as of 1937.

The Sanborn map from 1937, updated over time by gluing new pieces of paper into the map book, shows that there was an auto garage on the lot of the Emerson house and the house was stuccoed. Per the map key, the red outline means the house had brick on its exterior.

This is just what I learned in about a day’s time by running to and from various archives. As you can imagine, there are a lot of other resources out there, including Census records, blueprints, vital records, books, architectural archives and manuscripts. Here’s where you can go to get started:

(Thanks to Minnesota Historical Society reference librarian Jacqueline Beckey and Susan Larson-Fleming of the Hennepin History Museum for their help.)