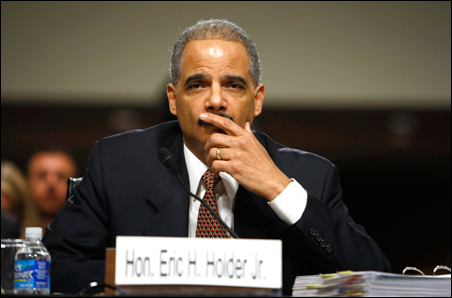 Holder appeared before the Senate Judiciary Committee in an attempt to assuage fears that prosecutors might not win a conviction in the case if Mohammed and four of his alleged co-conspirators are given full legal rights in a civilian court.

“I support showing the mastermind of 9/11 the meaning of American justice in our courts,” said Sen. Al Franken, who, along with Sen. Amy Klobuchar, is a member of the committee. “That justice is what makes us strong and our courts are prepared to handle it.”

Klobuchar, saying she was “interested in getting these guys,” questioned how effective such prosecutions are, with Holder responding that there is a 94 percent conviction rate.

Mohammed will be held in special custody reserved for the most dangerous of offenders, Holder said, in a detention facility Trying him in a civilian court will give the defendants “no more of a venue to spew their hateful rhetoric” than they would have in a military court.

“Failure is not an option. These are cases that have to be won, I don’t expect to have a contrary result,” Holder said.

Republicans seized on those remarks.

“I don’t see how you can say that failure is not an option when you have jurors involved,” said Sen. Chuck Grassley of Iowa, noting that “a lot of people thought O.J. Simpson ought to have been put in prison” despite a California jury finding him not guilty of killing his ex-wife Nicole Brown Simpson and her boyfriend Ron Goldman.

Accused terrorists and war criminals, while most often tried in military tribunals, have occasionally been tried in civilian courts, convicted and imprisoned on American soil. For example, Sheik Omar Abdel-Rahman, who was convicted in New York in 1995 of plotting to bomb the United Nations and other New York City landmarks, is currently imprisoned at the Federal Medical Center prison in Rochester, Minn.

Estimates from the New York Police Department place the cost of trying Mohammed and his alleged co-conspirators at about $75 million, costs Holder said the federal government would help reimburse.

Klobuchar and Franken, speaking after most senators on the panel, largely used their question time to pursue other topics, including Medicare fraud and violence against women, especially on Indian reservations

“Trafficking of Native American women is just a big problem that I think is being ignored,” Franken said, asking that the administration join him in developing recommendations to address the problem – a request Holder quickly agreed to.

“If you look at the level of violations that young girls and women on the reservations are subject to it’s something like 10 times as high (as the rates for women not on reservations) and that’s unacceptable,” Holder said.