WASHINGTON — The 10 largest earmark requests submitted by Minnesota’s House lawmakers are headed for out-of-state organizations, a MinnPost analysis of earmark requests found, though most of them would likely have a direct impact back in the state.

The largest request, $53 million for the federal Department of Education for arts education submitted by Keith Ellison, is just such an example. The money would head to Washington initially, but trickle back down to schools across the country, including in Minnesota. Others are collaborative efforts between states, like the $35 million to build a water pipeline system from the Missouri River that would connect with southern Minnesota.

Just one of those earmark requests seems to have no direct impact on the state of Minnesota, that one being a $14 million request by Rep. Betty McCollum to fund the operations of the U.S. National Arboretum in Washington.

Below the top 10, Minnesota’s earmark requests [XLS] generally stayed in-state from start to finish. Generally, they’re budgeted to cost anywhere from $200,000 to about $3 million, with a few above and a few below.

At this point in the analysis, I’m afraid I’m going to have to disappoint you. This is where you were no-doubt hoping to read about Minnesota’s version of a Bridge to Nowhere, or for a funding request to study the greenhouse gas effects of cow farts or to build a museum dedicated to Woodstock.

Minnesota’s list is just plain boring. Most of them are for pretty standard things, like upgrading wastewater treatment plants, studies and planning for future high-speed rail projects that may or may not ever happen and adding lanes to highways. Rep. Tim Walz has three of those earmark requests for Highway 14 alone. 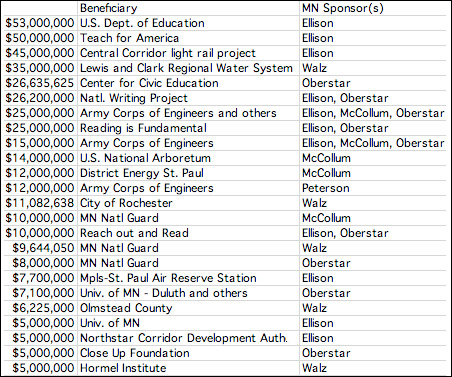 Earmark opponents, however, found much to dislike among the requests. The Freedom Foundation of Minnesota released a list of the 10 most objectionable earmarks, including $500,000 for the Grand Rounds Scenic Byway plank road replacement.

Ellison, in his official request, said the funds would be used “to refurbish, Plank Road, a wooden road surface located in the St. Anthony Falls Heritage Zone in downtown Minneapolis…. The project will enhance the ability to drive on the Scenic Byway and allow travelers access safely to and through the historic downtown Byway district.”

Said the Freedom Foundation: “The city can’t keep up with filling all the fresh potholes in Minneapolis, but wants to use your tax dollars to pave a street with wood.”

How they work
Earmarks don’t change the amount of money Congress spends, just where it goes.

“Usually these are projects where they’ve tried to go through the regular process but for one reason or another they weren’t able to get it — but they’re good projects,” said John Schadl, spokesman for Rep. Jim Oberstar. “When you give federal highway dollars to the state of Minnesota, it’s essentially the governor and [the Minnesota Department of Transportation] earmarking where that money is going to get spent.”

Think of the requesting process as the congressional equivalent of writing a wish list at Christmas time and sending it to Santa Claus. Each thing on the wish list is worthy in its own way, in your mind, but it’s up to Santa — a.k.a. the relevant Appropriations Committee — to decide if the request gets included in the overall House legislation that eventually emerges.

As Santa doesn’t have room in his sleigh for everything, like the federal government doesn’t have money to spend on everything, the list will have to be whittled down significantly. Hearings to do just that begin in May.

Lawmakers differ on how they treat requests. Schadl estimated that Oberstar rejected four or five projects for every one he requested. Walz’ ratio was closer to 3-2, according to spokeswoman Sara Severs.

Walz, in a unique move, placed all the requests submitted to his office on his official website and invited comments from constituents. More than 1,500 comments were received, Severs said. Of those, most commenters advocated for or dissented on one to three of the requests, though one constituent took the time to give feedback on every single one of them.

Republican moratorium
Also unique in the earmarks process this year is that House Republicans, by and large, aren’t participating.

No Minnesota Republican submitted an earmark request for the fiscal 2011 budget, each instead adhering to the House Republican Caucus’ one-year self-imposed moratorium on earmarks. Reps. John Kline and Michele Bachmann have made it a practice to eschew earmarks, while Rep. Erik Paulsen has requested them in the past. Paulsen’s agreement with the ban hasn’t cost Minnesota that much in local spending — just $400,000 of his fiscal 2010 earmarks didn’t also have a Democratic co-sponsor.

The move was intended partly as a political one-up to the House Democrats’ ban on earmarks for for-profit corporations that was announced just a day before, but also out of a deep philosophical opposition to dedicated spending requests.

For the last two years, Kline has maintained a website called StopthePork.com, dedicated to ending the pork-barrel, or earmark process. In a blog post on that website, he lauded the House GOP’s earmark ban.

“Like me, they have heard loudly and clearly from Americans who are tired of seeing their hard-earned taxpayer dollars spent on ‘priorities’ ranging from shrimp fishing projects to Woodstock film festivals.”

The moratorium lasts for this year alone, though Kline and Rep. Michele Bachmann said they’ll push for it to stay in place indefinitely.