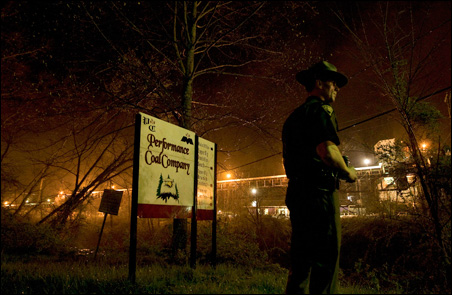 REUTERS/Chris Keane
A West Virginia State Police officer stands at the entrance to the Massey’s Performance Coal where 12 coal miners were killed in the Upper Big Branch Mine.

WASHINGTON — In the wake of the recent mine collapse in West Virginia, one of the deadliest mining disasters in years, Congress is expected to hold hearings into mine safety.

“We create this body of law and regulation to save lives,” said John Schadl, spokesman for Rep. Jim Oberstar, an Iron Range Democrat whose father was a miner and who himself worked odd mining jobs during the summers of his youth. “When we see a loss of life, it’s incumbent on us to make sure we did everything we could and see if the laws were followed.”

Following the 2006 Sago mine disaster, in which 12 miners died, Congress passed a raft of mining safety reforms that Schadl said will now be examined to see what, if any, changes need to be made. Additionally, the Mine Safety and Health Administration (MSHA) added 26 percent more mine inspectors and cracked down on safety violations.

Last year was a record low for fatal mining accidents, with just 39 nationwide, according to the MSHA. Minnesota miners have avoided a fatal accident for the past two years.

However, federal auditors just last week expressed concerns that the MSHA hasn’t ensured that all new inspectors are thoroughly trained before going on a job site, and that veteran inspectors are adequately retrained. Also, the Washington Post reported that while safety citations have increased, appeals have too [PDF] — and there aren’t enough judges to handle them. From the Post piece:

Commission Chairwoman Mary Lu Jordan told a House panel in February that the length of the appeals process has grown in the past three years, from an average 178 days to 401 days.

The Obama administration’s fiscal 2011 budget includes funding to add four more judges to the commission’s 10-judge panel, but the commission has said it needs a total of 26 judges to significantly reduce the backlog.

Rep. George Miller, D-Calif., chairman of the House Education and Labor Committee, credited the agency for beefing up enforcement and faulted companies for delaying the process.

“Miners’ lives are in the crosshairs,” Miller said at the hearing.

“We must continue to look at the safety conditions miners face every day and do all we can to prevent future accidents from occurring,” said Sen. Mike Enzi of Wyoming, the ranking Republican on the Senate Health, Education, Labor and Pensions (HELP) Committee. Enzi’s panel oversees the Department of Labor, including the MSHA.

Hearing dates have not officially been scheduled as yet; however, Minnesota lawmakers will have a chance to help shape whatever new legislation emerges from this disaster. Sen. Al Franken is a member of the Senate HELP Committee, while hearings in the House are likely to come in the Education and Labor Committee, where John Kline is ranking Republican. Oberstar, an Iron Ranger, is a part of the House Mining Caucus and Schadl said he’ll be watching the upcoming hearings very closely.

“We deal in a lot of open-pit mining (in Minnesota), so the issues might be quite a bit different than the ones in West Virginia and their underground mines,” Schadl said.