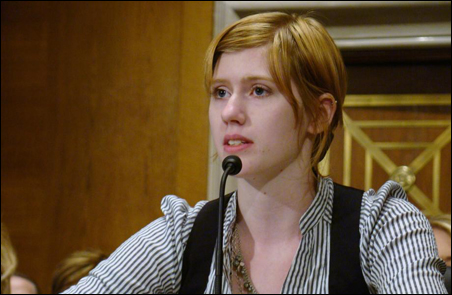 Courtesy of the Senate HELP Committee
Kayla VanDyke testified before the Senate Health, Education, Labor and Pensions Committee on Thursday.

WASHINGTON — Kayla VanDyke has lived in seven foster placements in and around the Twin Cities during the course of her 18 years on this Earth and, as a result, has now attended 10 different schools.

Along the way, VanDyke missed entire content sections because the school she’d enroll in taught a subject in a different order than the one she’d just left. She inadvertently skipped the entire fourth grade during a year of homelessness. When she and her mom were finally accepted in a Minneapolis homeless shelter, she went back to school and was enrolled in fifth grade because her academic records couldn’t be found and “no one pressed the issue.”

Because of the frequent school changes, VanDyke struggles with math and science. An A and B student otherwise, she failed the Minnesota Comprehensive Assessment of math and scored a 21 on the ACT. While that may not seem so bad, it is for someone who knows they’re capable of more.

On Thursday, she testified before the Senate Health, Education, Labor and Pensions Committee, aiming to put a face on the problems of educating often-faceless foster and homeless youth. Students, she said, should have the right (and the ability) to remain in their old school when they move to a new home.

Lawmakers said after the hearing that she’s likely to get her wish.

About 800,000 young people nationwide, including 8,400 in Minnesota, are in foster care. Many, like VanDyke, move frequently and change schools when they do.

VanDyke said she felt uncomfortable asking new foster parents to drive her back to her old school, even if it was just minutes away.

“It goes back to emotional stability, you’re in a new home, you don’t know these people they’ve already made accommodations for you, you feel like a burden so when you go out of your way to ask for accommodation you feel like even more of a burden,” she explained. “Especially when you’re used to moving a lot, you want to make a good impression, you don’t want to seem like a burden.”

Under the Fostering Connections to Success Act, enacted in 2008, school districts must ensure foster students are kept in their same schools after they move if it’s in the child’s “best interest” (there’s an exception if their parent or guardian wants to move them). Different school districts interpret that policy in different ways, said Denise Ross, who supervises the homeless education program in Prince George’s County Public Schools, a large school district in Maryland that includes affluent, middle-class and poor neighborhoods suburban to Washington, D.C.

“Sometimes [districts] base what is feasible on cost and convenience, rather than on what is truly in the best interest of the child,” Ross said. Her policy suggestions:

Minutes after the hearing concluded, Committee Chairman Tom Harkin of Iowa committed to including language in the forthcoming education reauthorization bill. It will now contain text that aims to ensure foster youth can stay in the same school and provide money to school districts to cover the additional cost of transporting them, Harkin said.

What form that text will take remains unknown, but Ross’ suggestions and legislation Sen. Al Franken has introduced (and that he promoted during the hearing) could be a starting point.

Franken’s $150 million bill would require foster students to be kept in their schools of origin (subject to a few exceptions) and require child welfare agencies to find a way to transport them to those schools. It would also designate a foster care liaison in each district to keep track of students’ progress and ensure the act was being followed, require the creation of processes to resolve disputes about the child’s “best interest” and allow students who flip between high schools with different graduation standards to graduate on time.

If that measure had been enacted years ago, VanDyke said it could have ensured she wouldn’t have fallen through the cracks, and wouldn’t have missed the fourth grade.

Mike Enzi, a Wyoming Republican and ranking member of the panel, suggested he could support language to encourage foster youth to stay in the same school, so long as there was flexibility at the local level.

“Not only are these programs complex, but the needs of the populations targeted by these programs are very complex,” Enzi said, speaking generally of special needs students (including fosters) before the hearing. “We must make sure that in meeting the needs of these populations we do not hamstring local providers with too many burdensome and restrictive requirements. Those closest to these students need the flexibility to best meet their unique needs.”

Though her testimony came before a Senate committee, officials with Rep. John Kline assured that VanDyke’s concerns would be also heard in the House.

“The [House] Education and Labor Committee will be looking at Kayla’s Senate testimony when we consider the issues under [the education bill reauthorization] related to special populations including foster youth,” said committee Republican spokeswoman Alexa Marrero, adding that Kline, the leading Republican on that panel, was “excited to have a constituent sharing her story in Washington.”

There’s a happy ending to the first chapter of VanDyke’s life story.

“Despite the statistics that suggest that roughly half of foster care and homeless youth do not finish high school, I will be graduating in four weeks with a 3.7 GPA,” she said to a round of applause from the audience in the packed committee room. “I’m on track to attend Hamline University in the fall, right after I complete an internship with FosterClub, the national network for young people in foster care.”

That’s the first of many internships she’ll have — Harkin offered her an internship with the HELP committee (she said she’ll “absolutely” take it), and policy analysts from several child welfare non-profits queued up after the hearing to ask her if she’d speak to this group or serve on that advisory board.

“Let me just say you are a well-spoken young woman,” Harkin told VanDyke. “As one of my young daughters might say, ‘You’re kinda awesome.’”