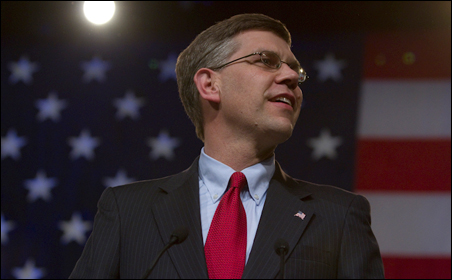 MinnPost photo by Terry Gydesen
Erik Paulsen: “I just want to plug away and get stuff done.”

WASHINGTON — On a paddleball court — four concrete or glass walls, a concrete roof and hardwood floors — the echoes from speaking in even a normal indoor voice make almost any conversation noisily inaudible.

Words said there must be uttered in hushed tones, lest they be lost amongst a cacophony of syllables echoing from all corners of the room. It’s not a lesson most politicians ever learn — how to be quiet to get your point across — but it seems to be working for avid paddleballer Erik Paulsen here in the nation’s capital — the loudest echo chamber in American politics.

A year and change into his first term in Congress, Paulsen has managed to pass more bills through the House (two) than the state’s other two Republicans combined (zero bills, but one resolution apiece).

Along the way, Paulsen has managed to buttress his position from a vulnerable first-term congressman who got less than half of the vote in a district carried by President Obama in 2008, to a formidably ensconced incumbent with a prohibitive fundraising and cash advantage.

“I think he’s made a conscientious effort to do things,” said former Rep. Bill Frenzel, a Republican who held the 3rd District seat from 1971 to 1991 and is now a guest scholar at the Brookings Institution in Washington. “It takes a lot of work for a freshman in the opposition to do something, even if it’s really popular.”

In person, Paulsen is easily the quietest Minnesotan in the entire delegation. He speaks in relatively hushed tones such that it’s sometimes hard to hear him in the Capitol’s busy hallways.

Ask him about health reform and most politicians have a ready-made sound bite. Ask Paulsen, and you’re in for a minutes-long dissertation on the deficit consequences of unfunded liabilities or hand-wringing over feared job cuts from a new $20 billion tax on the medical device industry — big business in his district. 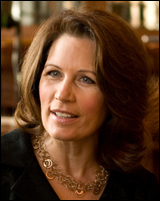 Contrast that with his neighbor to the north, Michele Bachmann. She has become a regular on Fox News and Sean Hannity’s radio show, emerged as a darling of the Tea Party right and is now called upon by conservatives across the nation to headline their rallies and fundraisers. Several in the Republican caucus are trying to copy her model for a stratospheric rise in the conservative esteem, but seemingly not Paulsen.

Paulsen has criticized the Obama administration just like every other Republican, but he’s never thrown out one of Bachmann’s “gangster government” fireballs.

Paulsen, for his part, said he doesn’t see a reason to compare him to Bachmann more than any other member, saying his focus is on “doing the homework” and working on issues important to his district, and ensuring that his office provides effective constituent services.

“I think 3rd District residents, probably more than others, they want stuff done, they want to be solutions-oriented so I’m just trying to focus on solutions,” Paulsen said. “I mean sure, would I love to try to get on TV? I mean sure, that’s nice to do, but it’s not like a focus or a priority. I just want to plug away and get stuff done.”

Bachmann, for her part, praised the approach taken by Paulsen, saying that he’s a “hard worker” who “knows his district.”

“It’s merely a style difference,” Bachmann explained of the differences between the two. “It’s different avenues and venues for doing our work and getting the message out.”

Not Jim Ramstad
Frenzel found more of a difference between the two. “The 3rd District has this Republican reputation, but the independents have always been the plurality group in the district,” Frenzel explained. “They have liked a sort of independent style, and they have liked some independent judgment. Maybe they like good old conservative thought but they don’t want slavish devotion to conservative principles that overwhelm all practicality.”

In other words, 3rd District voters want someone like Jim Ramstad. A capital-M moderate who held the 3rd District seat from 1991 until he retired in 2009, Ramstad was pro-choice, supported gay rights (to a point, not including marriage) and opposed restrictions on stem cell research.

Like many representatives, Paulsen has had to contend with the shadow of his predecessor. As a former Ramstad aide, Paulsen’s resume invites those comparisons.

Though Paulsen said he doesn’t really hear it, multiple staffers told me that they receive calls “all the time” from industry groups and constituents who say “Ramstad would have done (insert thing here).” Not that Ramstad actually would have necessarily — Paulsen’s office got quite a few calls that said he would have voted both for and against the health care bill.

I didn’t get a chance to clarify that point as Ramstad, through a spokesman, declined to be interviewed for this piece.

“Jim is working as a consultant for two bipartisan organizations and therefore he is not getting involved in partisan politics, which includes interviews concerning the various candidates,” Ramstad spokesman Lance Olson said in an e-mail. That having been said, when asked if Ramstad would endorse Paulsen this year, Olson replied that he “would think so.”

I asked Paulsen if he came to Congress to be a legislator very much like or very different from Ramstad. “I guess I’ve never thought about it that way,” he replied.

Record in Washington
So far, Paulsen has been a reliable Republican vote on all major legislation to hit the floor, voting against the stimulus bill, cap-and-trade, the House health care bill and the House/Senate compromise health care bill. Paulsen’s voting record puts him smack-dab in the center of the Republican caucus, something that can of course be spun either way.

“He’s probably a great deal more conservative than I, but very thoughtful and a good listener,” Frenzel said.

“I think that his record is something he’s going to have to stand on and answer for,” said DFL spokeswoman Kristin Sosanie, noting his opposition to health care reform, the stimulus law and other Democrat-backed bills. “When you’re voting against health care and jobs, that’s not something the people of the 3rd District want.”

Let’s look at that record for a moment. Probably the biggest thing that stands out is that Paulsen has had two bills where he’s the lead sponsor pass the House, while GOP Reps. John Kline and Bachmann have had no bills and one resolution apiece (Kline’s to support Veterans of Foreign Wars Day and Bachmann’s to recognize National Hydrocephalus Awareness Month).

The first of those would require reports on the Wall Street bailout to include its effect on small businesses. His second would exempt organizations that collect personal information from annual privacy notice requirements if their privacy policy hasn’t changed that year. Nothing world-shaking, but even one bill is an accomplishment for a freshman from the minority party.

He sits on the Financial Services Committee — that’s the one that handled the Wall Street reform bill — and Paulsen said his goal is to chair it one day. Currently, he’s co-chairing the Medical Technology Caucus (“A great thing for a freshman,” he said). And in 1st District Democrat Tim Walz, he’s found a partner on the other side of the aisle with whom to work on veterans issues expanded domestic nuclear power.

Two types of people call themselves fiscal conservatives. The first are those in the mold of President George W. Bush, who when faced with budget surpluses decided to enact sweeping tax cuts. The second, which is now in vogue, are those who would rather pay down the deficit first.

Paulsen counts himself among the latter. He said he worries about the rapid rise in the national debt, from those tax cuts and profligate spending under both the Bush and Obama administrations, and said if there was a spare $100 million in the budget he’d “rather pay down the debt” than use it to cut taxes. In fact, Paulsen has been a vocal proponent of ending the Wall Street bailout early and paying down the debt with the remaining funds.

Paulsen has embraced new media as an outreach mechanism. While most lawmakers post statements to their websites, Paulsen releases YouTube videos. He’s a regular on Twitter and was the only Minnesotan to win an award for having an accessible member website (Kline got one for his committee page).

However, opponents have seized on his use of one of the oldest methods of campaign outreach — direct mail. Congressional franking privileges allow members to send out mailings at taxpayer expense for informational purposes. They’re not allowed to be campaign pieces, but have the practical effect of putting a member’s face and name before a voter in a positive light with no hit to the campaign purse.

Paulsen has spent more money on such pieces than all but two House members, $414,000 in total.

Democratic opponent Jim Meffert blasted out an e-mail hitting Paulsen for the spending, saying the “repeated use of taxpayer funds to send out campaign-style mailings shows that Paulsen is not as concerned with representing our district as he is with winning at any cost,” and adding that “For someone who claims to be a fiscal conservative, those numbers just don’t add up.”

It’s an odd occurrence, considering how narrowly he was elected less than two years ago. Freshmen elected with less than 50 percent of the vote, as Paulsen was, are automatically put on the other party’s target lists to begin the next election cycle, however Paulsen’s seat doesn’t appear on the Democratic Congressional Campaign Committee’s targeted Red-to-Blue list.

DFL officials point out that the race is far from over, arguing that it will become more competitive as the election season heats up. “Just because something’s perceived as safe, that’s not necessarily what’s going on on the ground,” Sosanie said. DCCC spokeswoman Gabby Adler said Paulsen “has failed to provide the independent leadership Minnesota voters are looking for and the innovative ideas and solutions that are necessary to tackle the challenges facing our country.”

“I think Paulsen is a good example of what happens when you put your head down, work hard, and raise a lot of money. That tends to deter potential opponents, particularly in a political climate that is difficult for the Democratic Party,” said Nathan Gonzales, political editor of the Rothenberg Political Report. As Gonzales summed up in a subscriber-only race analysis: “If Democrats couldn’t win this as an open seat in ’08, they aren’t going to win it in 2010.”

Gonzales said Paulsen’s head-down style can be “disarming.” Unlike Bachmann, he doesn’t tend to draw rabid supporters or frothing opponents. The lack of the latter leaves his challengers dramatically underfunded so far.

Put simply, Paulsen has raised 13 times what Meffert has this cycle and begins the general election campaign with a cash advantage of 35-to-1 over his closest competitor. Sosanie allowed that the vast fundraising gap is a “little bit of a hindrance at this point,” but expressed confidence that Meffert can pick up the pace as he continues to work the district.

He’ll have to. Paulsen raised $1.5 million through the first quarter of this year, with more than $1.1 million cash on hand. As of March 31, Meffert had raised $117,000, with about $33,000 left in the bank (though that was before he won the DFL’s endorsement earlier this month).

“It’s tougher to get people riled up and give money to defeat Paulsen, compared to running against Bachmann,” Gonzales explained. “[DFL-endorsed challenger] Tarryl Clark can send an email to thousands of Democratic donors across the country and they will know Michele Bachmann.

“On the other hand, if those donors got an email that said, ‘Can you believe what Erik Paulsen said?’ they wouldn’t give it a second look.”