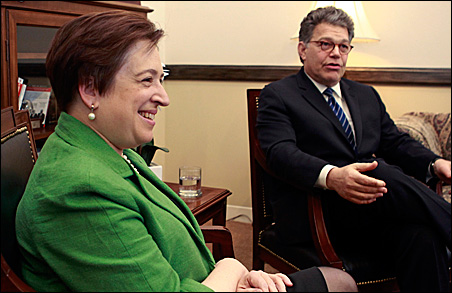 WASHINGTON — Al Franken came away from his one-on-one afternoon meeting with Supreme Court nominee Elena Kagan much the same as he entered it, firmly (but not yet officially) supportive of her candidacy.

“I enjoyed my meeting with Elena Kagan very much,” Franken said in a statement following the 40-minute meeting.

Still, the early reviews were positive.

“I found her substantive and engaging,” Franken said. “I was impressed by her remarkable career, and it’s clear she would bring some much-needed variety to the court. We had a great, lengthy conversation about many areas of law, the confirmation process, and her views on the role of the Supreme Court.”

As reporters snapped photos of Franken and Kagan sitting in his Senate office, Franken cracked a joke that Kagan was already doing better than Sonia Sotomayor at this time last year. Sotomayor, you may remember, had broken her ankle shortly after her nomination, and was making the rounds with lawmakers with a cast on her foot.

The Chicago Sun-Times has a transcript of much of the Franken-Kagan exchange here.