WASHINGTON — It’s a long-standing tradition in the Senate that on the first day, the Senate gathers to hear its leaders declare how this year they’re going to finally work together, shelve partisanship and “fight for our country, not with each other,” as Harry Reid said in January 2007.

A novice Amy Klobuchar, on her first day in the Senate, arrived and cut to the chase with a one-liner: “I’m here for the civility meeting,” she said.

That sense of humor has served her well, said veteran Washington journalist Terence Samuel, who profiled Klobuchar and several other senators elected in 2006 for his new book “The Upper House,” which was released this week. 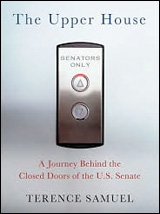 Klobuchar’s freshman class totaled nine Democrats and one Republican, all determined to immediately turn Washington on its head and leave their mark on what is often referred to as the “greatest deliberative body” in the world.

Instead, they often find themselves stuck in the open corridors of the Senate’s labyrinthine procedural rules, lacking the seniority to bully bills through or the know-how to cajole savvier veterans.

So it was for Klobuchar in June 2007, when she proposed an amendment to establish a federal carbon registry. Despite her earnest words on the Senate floor, including a shout-out to “a hunter in Hinckley, Minn., who sees changes in the wetlands,” her amendment went precisely nowhere.

Klobuchar’s profile in “The Upper House”will already be well-known to avid politicos who have followed the rise of Minnesota’s relatively junior senior senator.

In this case, the intrigue comes in its descriptions of the day-to-day machinations of the Senate itself — like how senior Democrats who were given a majority with an implied mandate to end the war in Iraq managed to convince themselves that they had succeeded by simply sending President Bush a “strong message” that they weren’t happy with the war and preventing what they thought was an impending war with Iran.

In a phone conversation earlier this week, Samuel told me he came away impressed with his subjects, particularly Klobuchar. He noted her sense of humor, and said that her folksy manner belies a driven subject who knows what she wants and takes it.

“I think she’s got her eye on higher things,” Samuel said, “and I don’t think it’s going to be ridiculous to hear her mentioned as a presidential hopeful the next time that’s a possibility, meaning in 2016.”