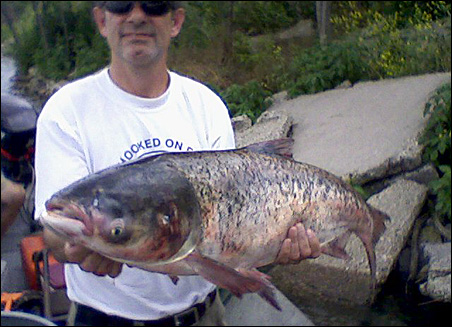 Photo courtesy of the Illinois Department of Natural Resources
A fisheries biologist with the Illinois DNR holds a bighead Asian carp caught in Lake Calumet.

WASHINGTON — A 20-pound bighead Asian carp has been caught just six miles from Lake Michigan, past an electronic barrier designed to keep the fish from entering the Great Lakes.

It’s the first time such a fish has been found upriver of the electronic barrier, officials with the Illinois Department of Natural Resources confirmed. There is no barrier between where the fish was found and the mouth of Lake Michigan.

Asian carp are voracious eaters that many fear would irrevocably alter the Great Lakes ecosystem, munching through the lower parts of the food chain and starving out the native whitefish, trout and other fishes that commercial fishers and recreational anglers rely on.

The large fish startle at the sound of boat motors, and are known to jump out of the water on hearing them. Fishermen have reported injuries from carp flying out of the water and into their faces.

The discovery reignites a debate over whether or not to close shipping locks in Chicago, a move that advocates say would stop the fish but opponents charge would be not just unneccesary but economically devastating.

Col. Vincent Quarles, commander of the U.S. Army Corps of Engineers’ Chicago District said the fish’s capture doesn’t mean the Chicago locks should or will be closed.

“We will continue to support fish suppression activities by modifying existing structures such aslocks as requested by other agencies to support this common goal,” Quarles said in a statement. “At this time there is no intention to close the locks.”

To close, or not to close? That is the question
The efforts seemed even more futile earlier this month, when the locks were closed for days for a kill census that turned up 100,000 pounds of dead fish but no carp.

A group of Great Lakes lawmakers, including Democratic Sens. Amy Klobuchar and Al Franken and Republican Reps. John Kline and Erik Paulsen, have signed on to legislation that would close the locks. That has gone nowhere.

Minnesota signed on to a Michigan lawsuit to force the closure of the locks. That effort was rebuffed by the Supreme Court.

And many hope that any renewed efforts will be just as futile.

“A few isolated incidents of Asian carp in this small section of the Illinois Waterway does not mean existing barriers have failed,” said Mark Biel, executive director of the Chemical Industry Council of Illinois, which has helped form the UnLock our Jobs coalition to fight lock closures.

“According to the U.S. Fish and Wildlife Service, there are 21 pathways through which Asian carp could have been introduced north of the barrier — including recent heavy rainfall and human transport. In fact, the U.S. EPA is currently studying the collected specimen in an attempt to determine its source”

“While this is sure to result in renewed calls for permanent closure, such drastic action is simply unwarranted given the effectiveness of the electric barriers and the facts on the ground.”

If not now, when?
But advocates say the discovery signals that current measures aren’t working.

“Asian carp are like cockroaches, when you see one, you know its accompanied by many more you don’t see,” said Henry Henderson, Midwest program director for the Natural Resources Defense Council. “Now we can stop arguing about whether the fish are in Chicago’s canals and start moving as quickly as possible toward permanently separating the Great Lakes and Mississippi River watersheds. We just cannot wait five to seven years for the Army Corps of Engineers to complete its own studies before deciding to solve this problem.”

“This live bighead carp was caught well beyond the electric fence that was supposed to stop them, only six miles from Lake Michigan. There are no other physical barriers before these monsters reach Lake Michigan,” said Andy Buchsbaum, director of the Great Lakes Office of the National Wildlife Federation. “If the capture of this live fish doesn’t confirm the urgency of this problem, nothing will.”

“We need to pull out all the stops; this is code red for the Great Lakes.”