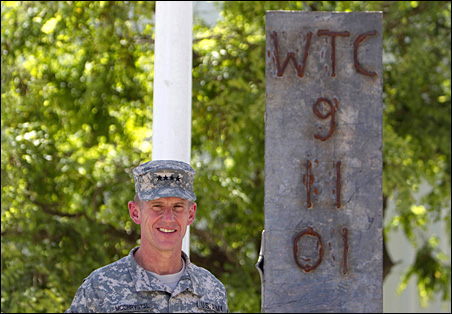 REUTERS/Ahmad Masood
Gen. Stanley McChrystal poses for pictures next to a steel beam from the World Trade Center during a ceremony to commemorate Memorial Day in Bagram airbase, north of Kabul on May 31.

WASHINGTON — Minnesota lawmakers deferred to the White House on the decision over the future of Gen. Stanley McChrystal, the  author of the counterinsurgency strategy at the heart of the U.S.-led effort in Afghanistan.

[Update: After a meeting this morning, President Barack Obama removed McChrystal from command of U.S. and NATO troops in Afghanistan and replaced him with Gen. David H. Petraeus. You can read the Washington Post story here.]

McChrystal’s continuation in that role was in serious doubt after an explosive Rolling Stone profile of him was made public. In that piece, McChrystal and his senior staffers blasted almost every leader in the U.S. war effort, from President Obama and Vice President Biden on down.

“It is unfortunate to see General McChrystal’s long and distinguished military career blemished by this indiscretion,” said Rep. Jim Oberstar. “He’s been in the military long enough to know better.But ultimately it’s the president’s call.”

“As Gen. McCrystal has admitted, the comments made by he and his staff show poor judgment,” agreed Rep. Tim Walz, who served for 24 years in the National Guard. “I am glad the president and Gen. McChrystal will have a chance to meet….We all need to focus on making sure the brave men and women who are serving our country in harm’s way have a clear mission and the support they need to get the job done.”

McChrystal arrived in Washington around midnight, summoned from halfway around the world in Afghanistan where he leads the war effort there for what will no doubt be blistering questioning.

Key questions
The most important will be his meeting with Obama this morning, at which two key questions must be answered in that meeting. The first, and most obvious, for McChrystal.

“The purpose for calling him here is to see what in the world he was thinking,” Gibbs said.

The second, for Obama: Is this the guy you want running the war in Afghanistan?

McChrystal’s minuses became crystal clear Tuesday. He’s brutally frank, and apparently indiscreet. His working relationship with the diplomatic corps (save Hillary Rodham Clinton) is almost nonexistent. And troops on the ground are questioning whether his protocols are putting American lives in danger.

The plusses, however, have been enough that McChrystal wasn’t fired immediately. Indeed, Obama said late Tuesday that he might be able to save his job today.

McChrystal, by his own admission in Rolling Stone (and no one has disputed this yet), is the closest American to Afghanistan President Hamid Karzai’s government — indeed Karzai called Obama Tuesday to say he’d like McChrystal to stay on.

He didn’t question the basic strategy in Afghanistan, and interestingly enough there hasn’t been much dispute over his criticisms on the execution of the war.

Which is to say, people are saying McChrystal shouldn’t have said what he said, not that he’s wrong.

Still, McChrystal will face a tough fight to save his job. 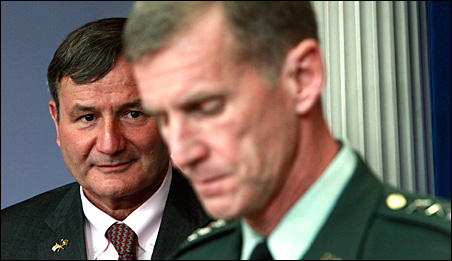 REUTERS/Kevin Lamarque
U.S. Ambassador to Afghanistan Karl Eikenberry, left, listens as Gen. McChrystal speaks to reporters on May 10. McChrystal accused Eikenberry of raising doubts about Hamid Karzai only to give himself cover in case U.S. efforts failed.

“I believe that Gen. McChrystal made a significant mistake and exercised poor judgment in this case,” said Defense Secretary Robert Gates in a statement announcing that McChrystal had been recalled to Washington.

“Our troops and coalition partners are making extraordinary sacrifices on behalf of our security, and our singular focus must be on supporting them and succeeding in Afghanistan without such distractions.”

Gates added that McChrystal had phoned him to apologize, one of a list of calls McChrystal made to all but one of those high-level officials named in the Rolling Stone article. ABC News reported him saying he’d “compromised the mission.”

The lone omission from that phone call list? Obama, whom Gibbs said had neither called nor been called by McChrystal. Their conversation this morning will come “in lieu of” that phone call, White House spokesman Robert Gibbs said, and will determine his fate.

“All options are on the table,” Gibbs said.

Lawmakers defer to Obama on McChrystal; general replaced by Petraeus