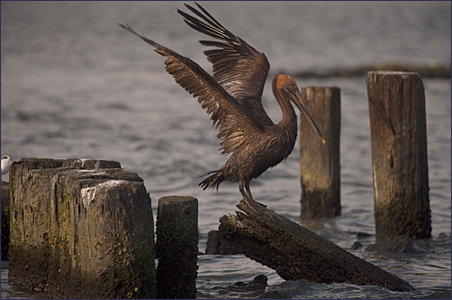 REUTERS/Lee Celano
An oiled Brown Pelican flaps its wings on a piling near Grand Isle, Louisiana, on Tuesday.

WASHINGTON — House Democrats amped up their rhetoric against BP Tuesday while aiming to consolidate efforts toward a legislative response to the Gulf oil spill.

Rep. Jim Oberstar blamed a “viscious cycle of self-certification,” adding that BP has a “bad record” on safety. Massachusetts Rep. Ed Markey went further, saying the company’s leaders are “either lying or they’re grossly incompetent” and “definitely trying to lower their liability” by underestimating how much oil has sprung from the failed Deepwater Horizons leak.

Hearing after hearing is being held (including one in Oberstar’s Transportation Committee today), at each of which BP is excoriated while lawmakers try to find out what went wrong, how to best respond to the spill and what might need to change to make sure such a spill doesn’t happen again.

Everyone, it seems, wants a piece of BP’s hide. And with six House committees (and more in the Senate) that have jurisdiction over some part of the spill and response, they’re all going for it.

The problem is, six committees might yield six different solutions, all of which would have to be reconciled before going to the full House for a vote. That would take time lawmakers say they don’t have.

So House Democratic leaders, recognizing that the current let-me-at-’em strategy won’t yield results if left to its own devices, convened a summit of chairmen whose committees have oversight over the Gulf oil spill to consolidate efforts.

How it will all work out is still very much a work in progress, however House Speaker Nancy Pelosi said the group came to an agreement on authorizing subpoena power for a presidential commission looking into the oil spill. The hope is that recommendations from that commission might form the basis of a legislative response.

Meanwhile in the Senate, lawmakers are considering legislation to increase or remove entirely the liability cap on oil spills.

“Most industries do not face caps on their liabilities, so why do oil companies get special treatment?” Sen. Amy Klobuchar asked in a statement following Tuesday’s Environment and Public Works hearing on just such a bill. “These caps only encourage the risky behavior that caused the disaster in the first place.”

That was Klobuchar’s second hearing on the spill Tuesday. Earlier, she and Sen. Al Franken talked about liability caps at a Judiciary Committee hearing. While agreeing that caps need to be lifted, Franken turned his focus to a long-term climate bill that remains stuck in the Senate.

Meanwhile, the hearings continue. And it will only amplify next week, when BP CEO Tony Hayward comes to town for a hearing all his own.

Minnesota lawmakers want BP’s hide, but what can Congress do?