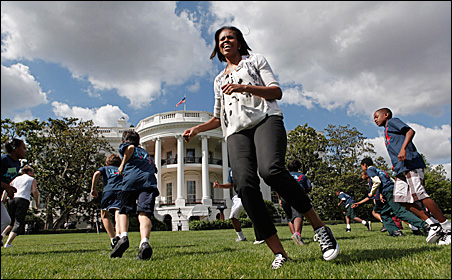 REUTERS/Jim Young
Michelle Obama runs with school children on the South Lawn on May 25.

“Only 10 of the 25 people I graduated from college in physical education with are doing anything related to their degree because they can’t find jobs, kept getting cut and just can’t do it anymore,” Weber said.

Education providers are under increasing pressure to measure up on standardized tests, which means that many schools are trading school day hours for academics over physical education to ensure they will meet requirements to lock in funding.

As a result of repeated cuts in physical education across the state, teachers like Weber are looking for work while the waistlines of Minnesota students only get bigger.

“Over the last 10 years, schools have been under intense academic pressure to add more time in their school day for reading and math, and there is only so much time in the school day; time is finite,” said Charlie Kyte, executive director of Minnesota Association of School Administrators. “Physical education is what has been squeezed.”

Focus on physical ed
Research shows that physical education and activity in school is not only helpful in decreasing obesity and improving health but also plays a key role in helping kids focus in class.

“Physical education is absolutely imperative to the ability to learn,” said John Fitzgerald, a fellow at Minnesota2020, a think tank focusing on public policy. “If you make them [kids] sit in a chair for eight hours a day, they aren’t going to learn.”

A recent surgeon general’s report (PDF) that found nearly half of America’s kids ages 12 to 21 do not get enough physical activity, thus hampering their ability to learn.

“The truth is that lots of kids just aren’t getting enough healthy foods and they’re not getting enough exercise,” said Obama at a “Let’s Move!” Baseball Clinic Tuesday in Baltimore.

The first lady’s “Let’s Move!” campaign focuses on increasing physical activity in children, improving nutrition and the availability of healthy foods in schools. 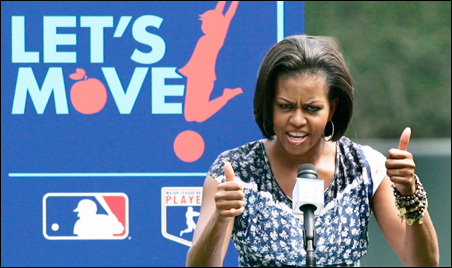 Obama’s initiative has been met with widespread support from celebrity chefs and professional athletes promoting physical activity and nutrition for kids.

But publicity and setting these concerns as a national priority may not be enough to overcome the structural constraints of the education framework.

Challenges to implementation
The problem, educators say, is that federal No Child Left Behind standards only judge a school’s performance based on annual standardized tests. Things that aren’t on the test, like physical fitness, can be left behind.

Supporters of the federal standards argue that it holds schools accountable to federal guidelines and requires schools to produce results on standardized tests to secure funding. And the data back up that claim, as test scores have largely risen since No Child Left Behind was implemented.

But critics point out that NCLB forces schools to choose between devoting school hours to academics or physical education.

“They asked us to do two things: see to it that our kids are eating more nutritious foods in school and that schools have more physical education and activity,” said Kyte. “But they haven’t taken one iota off of us for kids to do better in math.”

Public schools rely heavily on state funding, and it’s no mystery that major budget crises in states across the nation are putting the heat on educators. Minnesota school districts across the state cut $122 million for the 2008-09 school year. School aid has been cut by about 4 percent since 2003, and roughly 1,000 teachers are expected to be laid off by the end of this year, according to Minnesota2020.

In addition, the current economic downturn is limiting the funds families have to spend on extracurricular activities.

“People say kids’ sports are better than ever and there are lots of sporting opportunities, which is fine for the people that can afford those opportunities,” Corgard said. “But people aren’t participating in kids’ sports like Little League because they can’t pay for it.”

Potential bridges to cross the activity gap
The first lady has said her goal is for kids to get 60 minutes of active play each day.

To reach that goal, she has proposed a fund to help schools encourage activity by building more safe places for play, a fund targeted for inclusion in the next education bill, scheduled to come up later this year or next.

Rep. John Kline, the ranking Republican on the House Education and Labor Committee, says he wants local districts to have more flexibility on standards in the next education bill.

“Rep. Kline believes the best way to support a well-rounded education – including physical education, art, and music with science, reading, mathematics, and other priorities – is to maintain local control,” said Alexa Marrero, committee spokeswoman for the 2nd District Republican.

“It is not the federal government, but rather parents, teachers, superintendents, and school boards who are in the best position to set priorities for their schools.”

“We emphasize the academic and de-emphasize the physical and psycho-social,” Corgard said. “When kids don’t have recess and physical education, they don’t get the chance to play games, work out differences with others. This learning is carried over into the classroom.”

Lauren Knobbe is an intern in MinnPost’s D.C. Bureau.