ON THE CAMPAIGN BUS FROM WOODBURY TO HUGO — Rep. Michele Bachmann today said she will be taking cues on operating her new political action committee from Sen. Jim DeMint, who has fashioned himself a conservative kingmaker who doesn’t mind crossing his own party bosses or wading into primaries against the GOP establishment’s choice.

“My goal in the House is to do what Jim DeMint has been very successful doing in the Senate,” Bachmann told reporters this morning during a bus tour of her 6th District. “He’s been trying to bring like-minded conservatives into the U.S. Senate.”

DeMint backed more conservative challengers in Senate primaries from Florida to Kentucky to Colorado and Wisconsin. As of July, he’d spent $2.6 million on the effort. 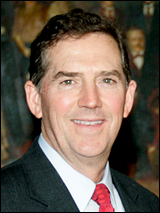 His most high-profile win was in Florida, where DeMint’s heavy backing was widely credited with elevating Marco Rubio over Gov. Charlie Crist in Florida, to the point that Crist fled the Republican Party and is now running for Senate there as an independent.

“What it suggests then is that [Bachmann’s] role is not the legislative process and bill passing, but rather the political electoral part,” said Larry Jacobs, a political scientist at the University of Minnesota. “She’s not trying to be elected speaker or majority leader — this is about her trying to build a movement across the country.”

Like DeMint, she could back primary challengers against establishment candidates (or even insufficiently conservative incumbents). Bachmann today said she wanted to emulate DeMint’s role in getting Ken Buck nominated in Colorado over Lt. Gov. (and GOP establishment choice) Jane Norton.

Although primaries across the country have concluded or will wrap up shortly, Bachmann said she hopes to use her PAC to bring more “like-minded constitutional conservatives” into  Congress beginning this fall.