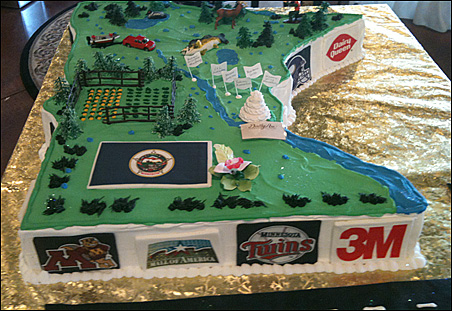 The cake (pictured above) was in the shape of Minnesota. It was wrapped with logos – Target, University of Minnesota, the Twins, 3M, Mall of America. Up north was a loon, a walleye and a blaze orange-clad hunter ready to take down a deer.

The campaign against Michele Bachmann is that she’s not Minnesota enough, that she’s become a national representative of the right, rather than a congresswoman for the 6th District.

So here was Bachmann at the Dorothy Ann Bakery in Woodbury on Wednesday beginning a two-day, seven-stop bus tour through her own district. She was wearing a Twins jersey (a blue Joe Mauer), standing in a locally owned bakery looking down at the most Minnesotariffic cake you’ve ever seen.

“The way that we’ve been out campaigning so far has been on a more, I’d say, low-key level,” Bachmann explained to reporters as her bus drove the 30 minutes north to the next stop in Hugo. “This is just one way, and a little bit more high-profile venue to be able to go out and mark out what we’ve been doing all along to let people know that we’re here and we want to meet people and talk to them.”

This bus tour represented half of a two-pronged strategy as Bachmann begins the general election campaign against Democrat Tarryl Clark in earnest.

The offensive half came in a campaign advertisement featuring a character named “Jim the Election Guy” standing next to Clark’s face and repeating the mantra that she’s “Taxin’ Tarryl,” in order to define Clark by a tiebreaking vote she cast earlier this year that would have raised some taxes as part of a plan (that eventually didn’t go anywhere) to balance the budget.

This was the defensive half, aiming to preemptively blunt Clark’s direct line of assault. Unlike El Tinklenberg’s 2008 effort that aimed to paint Bachmann as too far outside of the district ideologically, Clark hopes to show her as too frequently out of the district physically.

“After eight months, and in between visits to Texas and Florida, Congresswoman Bachmann has finally decided to squeeze in two days in her district talking with her constituents,” Clark campaign manager Zach Rodvold said in a statement before the tour launched.

A local focus on national issues
Mathematically, there’s not much of a margin for error in this contest. Last election, Bachmann pulled less than 47 percent of the vote, beating DFL challenger Tinklenberg by 3 percentage points. And after two elections of trying to paint Bachmann as too far to the right, Clark has changed tactics to painting her as out of touch.

It’s no secret Bachmann has a large national profile, with frequent appearances on conservative programs like Sean Hannity’s radio and television shows. She has national friends — and national enemies.

Already almost $8 million has funneled into the 6th District, both for and against Bachmann, much of it from outside the district. (While cost totals for this bus tour weren’t released, Bachmann’s camp sent out a fundraising appeal for $48,000 in 48 hours to cover the cost — though campaign operatives said the cost of the tour will be well below that.)

National press were barred from the bus (“Local media only,” her handlers repeatedly told a national camera crew) so Bachmann could talk to MinnPost, the Star Tribune, local Associated Press, MPR, WCCO, KARE, St. Cloud reporters and others about her district specifically. The bus itself bore witness to the meticulous locality of the tour — it was chartered from a Minnesota firm in Northfield (in the 2nd), but the press corps disembarked in Hugo at a factory that makes coils and springs for that bus company. 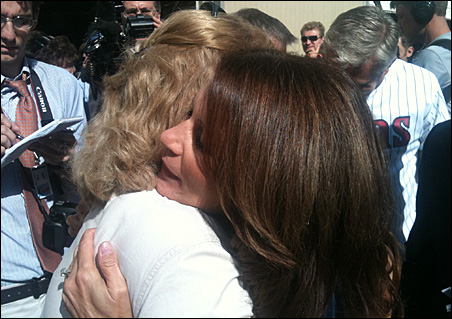 The question of the season was put to Bachmann on board her bus en route to Hugo, in one of the few unscripted moments on this tightly controlled tour: What do you want to tell people about what you’ve done for the 6th District specifically?

“I’ve been a very strong voice in Washington, D.C., against this out-of-control spending, against the tax increases, and against deficit spending,” Bachmann replied. “I worked very hard on the health care bill to make sure we wouldn’t have the government takeover of health care.”

Those are issues, she said, that voters across the 6th are telling her are their top issues — thus, being a prominent voice on them, the logic goes, equates to that strong local focus she aimed to project.

Clark’s camp disagreed, contending that Bachmann’s emphasis on national issues belies a national focus that too frequently ignores her own district.

“A carefully staged bus tour can’t cover the fact that Bachmann’s focus is not on the people of the 6th District,” Rodvold said. “Voters in the 6th District know that if Tarryl is elected, they’ll get more than a once-a-year bus tour. They’ll get a congresswoman who cares about them and is committed to addressing the challenges they face.”

How local is local?
The Bachmann supporters who showed up to this tour weren’t as much supporters as unabashed fans, who possessed all the impartiality toward their representative of a 13-year-old at a Justin Bieber concert.

Likely none of them have been as moved by Bachmann as Chris Addington, who literally packed up bags and relocated to Baytown Township from St. Anthony Village (in the 5th) in 2008 for one reason alone  — to vote for Michele Bachmann.

“Michele’s my hero,” Addington said from the front seat of her minivan, adding that if she could “aspire to be anybody, it’d be Michele Bachmann.” Two Siberian huskies were in the back — they’d met Bachmann and her beagle Boomer minutes before — and Addington, who shows huskies, had been visibly flattered as Bachmann cooed to the dogs, Holly and Sam.

For Addington, who now volunteers for Bachmann, the incumbent’s focus on national issues is an asset, not a liability. Bachmann doesn’t have to be back in the district every second Congress is out of session because, said Addington, “if I needed her in a minute, she’d be there for me.”

“She’s going to get this country back to where it should be. She’s my hope.”

It’s safe to say that Addington’s vote will be canceled out by Mike McElwee of Grant, one of three people who stood outside the bakery dressed in business suits holding signs. Grant’s read:

Thank you for regulating us
The check is in the mail
xoxo, BP

He was among three who quietly protested the start of Bachmann’s tour aiming to “present another point of view.”

That point of view — that Bachmann doesn’t focus on her district — is only part of his problem with Bachmann. For him, when she does speak she’s wrong on the issues.

“Perhaps Michele’s focus is narrow and it would be nice if she actually did more for the district,” McElwee said. “I live in the district, she’s my representative and I’m not happy with what I’m seeing her do – or not do.”

On the road with Bachmann: A Minnesotariffic bus tour