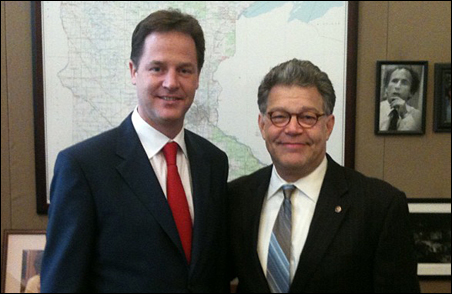 WASHINGTON — It’s not unusual for Sen. Al Franken to meet with University of Minnesota alumni when they visit Washington. Every Wednesday Congress is in session, in fact, a throng of Minnesotans converge on his office for coffee, orange juice and Mahnomin porridge.

This was Thursday, however, so no porridge. And this wasn’t any old U alum — it was Nick Clegg, the deputy prime minister of the United Kingdom. Clegg is on an official visit to Washington, his first major diplomatic trip since becoming deputy PM.

MinnPost was invited in as their talks concluded to watch as Clegg admired a photo of Franken’s Washington office’s rescue dog Blaine and found his old stomping grounds (Minneapolis) on a large wall map behind Franken’s desk.

Deputy Prime Minister Clegg and Senator Franken had a productive meeting and discussed a wide range of issues facing both the U.S. and the U.K., including health care, the war in Afghanistan, and education reform.  They also discussed the difficult economies their countries are facing and the steps they believe need to be taken to spur economic growth. And of course they discussed the Deputy Prime Minister’s time as a graduate student at the University of Minnesota and his memories of having to dig out of the snow.