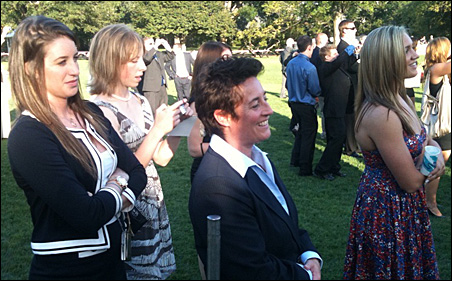 WASHINGTON — The defending national champion University of Minnesota-Duluth women’s hockey team have been here before.

The 2010 Frozen Four title was their fifth under coach Shannon Miller, the second in five years, and once again Miller found herself on the South Lawn of the White House with a team of young ladies soaking in the accollades from the leader of the free world.

“It’s a huge honor to be invited to the White House and be recognized by the president of the United States,” Miller said.

The team presented a personalized maroon road jersey (number ’10 for their 2010 title) to Obama when they met with him Monday afternoon. Most teams give home jerseys, but team members said they picked their maroon kit because they like the look of it more than their home whites.

It was a full day. The team met with Sen. Al Franken in the afternoon — Franken congratulated them on beating Cornell in triple overtime before joking that “I kindof went through a triple overtime myself” in the eight month recount that followed the 2008 Senate election.

At the White House, the team received congratulations from Sen. Amy Klobuchar and Rep. Jim Oberstar. They waited along a rope line to see the president, then moved to an uphill part of the sloped South Lawn to get a better view of the president over the heads of more than 600 NCAA champion athletes from across America.

Obama stressed the importance of service and giving back to one’s community in his brief remarks, saying that service begets a “selfless attitude” that would stay with the athletes the rest of their lives.

“And that’s incredibly important, because for the vast majority of you, the day will come — and it will probably sooner than you like — when you won’t be known primarily as a hockey player or a tennis player or a baseball player anymore,” Obama said, prompting smiles among the Bulldogs icers when he said the word “hockey.”

“Instead, you’re going to be known as a doctor or a lawyer or a teacher or a nurse, a businessperson, a mom or a dad.  And I’m confident that you’re going to excel at that just as you’ve excelled at everything that you do.”

Asked her reaction to the whole day after Obama concluded his remarks, Miller just smiled, soaking it all in. 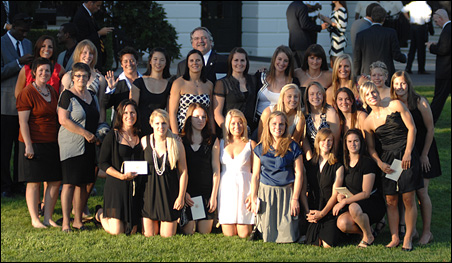 Credit: Ira Salmela/KUMD.org
The University of Minnesota-Duluth women’s hockey team poses on the south lawn of the White House.