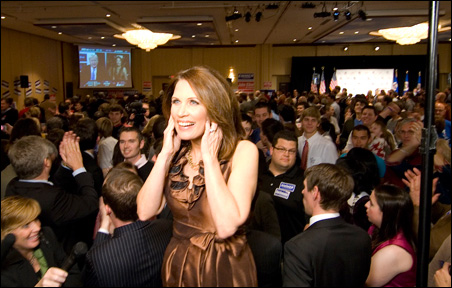 MinnPost photo by Bill Kelley
Rep. Bachmann shown during an interview with MSNBC on election night.

WASHINGTON — Republicans on Capitol Hill are thrilled with the money Michele Bachmann is able to raise — both in her own race and on frequent cross-country trips for dozens of embattled incumbents and insurgent challengers.

They’re awed by her ability to connect with Tea Party rallygoers. They’re impressed by her Twitter and Facebook followers and envious of the profile she’s managed to obtain in just two terms in Congress.

Yet while Republican leaders in the House are happy to associate themselves with Bachmann on Election Day, they’re nervous about fully embracing the chair of the House Tea Party Caucus when it comes time for governing.

So nervous, in fact, that they’re quietly campaigning hard to make sure she doesn’t get ensconced in the new GOP leadership. No one inside the Republican leadership will openly say they don’t want Bachmann to join the club, mind you, instead, it’s a mission accomplished through very carefully worded statements, subtly obvious slights and anonymous comments to the Capitol Hill newspapers most closely tracking the race.

So why are GOP leaders so willing to embrace Bachmann on the campaign trail but not in the Capitol?

The job they don’t want her to have

Bachmann is campaigning to be chairman of the House Republican Conference, a position that essentially directs the GOP’s policy and media strategy in the House of Representatives. It’s the No. 4 position in the House leadership and a job that, on paper, makes sense for arguably the most media-savvy Republican in the House.

Bachmann is a fixture on television and in conservative media. She has embraced social networking tools like Twitter and Facebook, is prolific on YouTube and has led the charge for a rules change so members can more easily utilize Skype to reach out to constituents. She formed the House Tea Party Caucus, the first official representation of the Tea Party in Congress, and has said she’ll be starting a Constitutional Conservatives Caucus sometime in the New Year.

Remember, though the GOP lustily embraced the Tea Party on Election Day, Bachmann was Tea Party before Tea Party was cool. She’s keenly aware that the would-be speaker and majority leader are not Tea Party Caucus members. And she issued a subtle reminder of how much she’d done — and where she was coming from — when announcing her candidacy.

Instead, that  “same party establishment” (represented by a who’s who list of GOP leaders) is lining up behind Rep. Jeb Hensarling, a very conservative fiscal-policy wonk who heads a 100-member internal think tank, the Republican Study Committee, but is largely unknown outside of Capitol Hill and his home state of Texas.

Eric Cantor, the likely No. 2 in the House, was one of the first to come out for Hensarling. Mike Pence, who currently holds the spot, is for Hensarling too, as is Budget Chairman-to-be Paul Ryan. Bachmann’s lone committee assignment is Financial Services, and the top Republican on that panel, Spencer Bachus of Alabama, is supporting Hensarling.

Likely Speaker John Bohener is officially neutral – though the most telling sign of his unofficial support came earlier today, when the House Republican transition team was named. Hensarling is on the list. Bachmann isn’t.

Bachmann’s public support, meanwhile, has been limited to the Minnesota delegation and her frequent ally from Iowa, Steve King.

Gor said Bachmann’s office would unveil a list of additional supporters likely early this week, a number that could be swelled with many of the freshmen and vulnerable incumbents she campaigned for earlier this year.

Both Hensarling and Bachmann are clear to point out that they are both running for a job, not against each other. Bachmann is Hensarling’s “honored colleague,” Hensarling spokesman George Rasley said, while Gor described Hensarling as Bachmann’s “good friend Jeb.”

However, the race has been cast (and is quickly catching on as media narrative) that this race is about Tea Party vs. the Establishment.

Hensarling’s supporters vehemently object to any statement that he’s the establishment — “I’m not sure that that’s not an oxymoron,” Rasley said.

They pointed to a statement from Dick Armey, the former House majority leader and founder of Freedom Works, which has spent millions on training Tea Party activists. Armey was on “Good Morning America” Friday, where the race between Hensarling and Bachmann was described as a proxy for Establishment vs. Tea Party Republicans.

Armey’s response: “Let me say, first of all. I think we’ve got a really good leadership team and quite frankly, I was surprised to hear you characterize Jeb Hensarling as an establishment guy. This is a candidate that gave opposition in deeply analytical terms to T.A.R.P. (the Wall Street bailout) and to the banking reform bill. He’s got a very bright mind and the reason he was on the T.A.R.P. Commission, was he was the best voice in opposition to it.  So, the fact is, this is not an insider.  This is not an establishment guy.  He’s a very bright and able person.”

Hensarling is a conservative lawmaker — by some measures even more so than Bachmann. He authored a constitutional amendment that would reduce government spending to 20 percent of GDP.

“Jeb is who he is, and I believe that his record as one of the most conservative members (of the House) speaks for itself,” Rasley said.

Why they don’t want her

By sheer volume alone, Bachmann easily outdistances almost any other Congressional politician in terms of media ability. She’s got an open invitation for Sean Hannity and Glenn Beck’s radio and TV programs, while her office routinely has to decline hundreds of requests other representatives might jump at simply because she doesn’t have time.

Consider one measurable aspect of the Conference chair’s job: Promoting the GOP through social media, it’s helpful to look at exactly how prolific the candidates are on social media.

It’s somewhat farcical to say that the candidate who trails 41 to one on Twitter and by 63 to one on Facebook is the stronger candidate on social media. Similar number s about for cable news and right-leaning radio appearances – in fact, on volume, it’s tough to make a case for Hensarling at all.

And indeed, that’s not where Bachmann’s opponents are making the case. They’re doing it on message – and with the insinuation that Bachmann is too much of a rhetorical loose cannon to reliably speak for the GOP as a whole.

It’s a case subtly but clearly made by Paul Ryan, the top Republican on the Budget Committee who cherishes his reputation as a thinking man’s lawmaker, and by Marsha Blackburn, a Tea Party Republican from Tennessee who expressed concerns about who could best and most reliably speak on her behalf.

“Jeb’s economic expertise and strong ability to communicate are what we need in our Conference Chairman to articulate our unified commitment to get our country back on track,” Ryan said in a statement. “This position requires someone who has a command of these issues and has a history of successfully debating them.”

Blackburn agreed:  “When you vote for conference chair, you are empowering a colleague to speak for you. I share the constitutional commitment of many of my colleagues who may cast their vote for Michele. She has brought tremendous energy to our party. Jeb Hensarling is a solid conservative with profound understanding of the issues our country faces. He will bring equal energy to the job and can press our agenda on all fronts. I am pleased that he will speak for me.”

Two separate sources, one a Hensarling supporter and one a Bachmann supporter, both pointed to a recent example of the outspokenness that can get her in trouble — when she repeated an anonymously sourced Indian news report that President Obama’s trip to Asia would cost taxpayers some $200 million a day.

Though official cost figures weren’t released, the claim was quickly and relatively easily debunked, earning Bachmann another “false” rating from PolitiFact, and continuing a streak that every statement of hers they rate has been given a “false” or “pants on fire” rating.

But perhaps even more than all that, the “establishment” is wary of Bachmann’s claim that she resides at the apex of Constitutional conservatism.

GOP lawmakers are becoming resentful that the Minnesota lawmaker, a close pal of former Alaska governor Sarah Palin, is running as the only voice that would represent the Tea Party in leadership.

They say Hensarling has long fought for Tea Party goals such as limited government and reduced government spending.

“Members are getting resentful of Bachmann, who they say is making the argument that you’re not really a Tea Party supporter, unless you support her. That’s gone through the formation of the Tea Party Caucus and the formation of this candidacy of hers. It’s just not so,” the GOP aide told The Hill.

Should Hensarling win, the Tea Party Caucus would actually get downgraded in terms of representation in leadership. The retiring conference chairman, Pence, had been a member of the caucus, but Boehner, Cantor and likely GOP Whip Kevin McCarthy are not. Hensarling isn’t either.

Boehner has talked instead about having an official freshman liaison to the leadership, which would likely be held by a Tea Party-endorsed new member.

Yet while Bachmann is a solid underdog in the race, conservatives are cognizant that some room needs to be made for a member who took time out of her own legitimately competitive race to go save necks in other corners of the country.

Erick Erickson, founder of the Red State blog, supports Hensarling but says Bachmann “deserves a seat at the table.”  The Washington Examiner’s Mark Tapscott, who like Erickson thinks Bachmann is challenging the wrong person, wrote that diffusing Bachmann’s challenge would pose the “first real test” of John Boehner’s speakership.

“Bachmann portrays her candidacy as being important so that the House GOP can “demonstrate to the people who sent us here that their concerns will be tirelessly advanced at the table of leadership,” Tapscott wrote. “But that demonstration can be made in a wide variety of ways, so Boehner could diffuse the contest by opening doors for Bachmann for leadership roles in other ways.”

Unfortunately, he said, Boehner has so far taken a “hands-off” attitude.

All of this jockeying for position, and concern about “establishment” narrative, foretells a major headache for Boehner as he attempts to position his caucus for legitimate governing, not just opposition.

“If elected speaker, Boehner’s major challenge will be to deal with, maybe even working with, a Democratic president – and a still-Democratic Senate,” said Paul Beck, a political science professor at the Ohio State University.  “It will take great political skills to both please the most conservative members of his House party caucus [some of whom won their seats with Tea Party support] and position the House party as a responsible partner with others in Washington in addressing the nation’s pressing problems.”