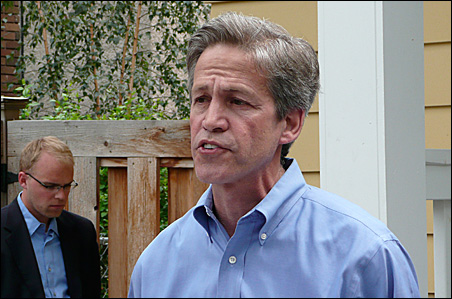 MinnPost photo by Jay Weiner
Norm Coleman: “I’ve said if Steele was running, I wouldn’t run against him.”

“I’ve been pretty consistent on this, it’s very simple,” Coleman said. “I’ve said if Steele was running, I wouldn’t run against him. He strongly supported me in the past; I made that commitment to him a number of months ago — if he’s in I’m not in.”

Coleman’s name has been seriously attached to an RNC run since at least July, when word leaked that he would be interested in the post. That proved to be a distraction, and after that Coleman issued a series of statements saying he was focused on 2010 and canceled a planned trip to an RNC meeting in Kansas City.

Coleman’s American Action Network and American Action Fund proceeded to raise millions of dollars that, because of the way they are incorporated, does not have to be disclosed, and spent much of it targeting vulnerable Senate Democrats, including Russ Feingold in Wisconsin (who lost) and Patty Murray in Washington state (who won, but barely). Raising money, targeting it and spending it is basically the chief job of a national committee chairman, and Coleman was to all insider accounts succeeding in spades.

Sources close to Coleman said the former senator had begun a serious push toward running, under the belief that Steele was leaning toward not running again. On Monday, news leaked of those plans, with POLITICO’s Mike Allen quoting a close Coleman aide as saying “Norm is leaning towards running, based on his ability to raise money and act as a national surrogate.”

That was Monday morning. By Monday afternoon, reports that Steele would drop out were replaced with reports saying he’d try to hang on, and on Monday evening he announced his plans to seek another two-year term as chairman.

It has been a tumultuous year in many ways for the RNC. The committee is at least $20 million in debt, according to its own treasurer, and fundraising was anemic this year. The Minnesota Republican Party typically receives “millions” from the RNC each cycle, party Chairman Tony Sutton said, but this year only received about $60,000.

“Maybe if I’d gotten a little more money, Tom Emmer would be governor,” Sutton said, adding that he doesn’t think the RNC had anything against Minnesota, “I just think they didn’t have the money.”

Yet the results across the 2010 election represented one of the most successful year-on-year turnarounds in history. Republicans gained 63 seats in the House to take back the majority and flipped 11 governorships. The Senate produced gaines, though not an absolute majority, while on the state house level, so many chambers flipped that Republicans will now control a majority of states’ redistricting efforts. Michael Steele was chairman for all of that.

Despite Coleman’s staying out, Steele will face a crowded field of challengers.

Saul Anuzis, the former chairman of the Michigan Republican Party, was a candidate for RNC chair in 2008 and is running again. Ann Wagner, the former Missouri party chair and head of the 2004 RNC convention, has announced too, as has former Iowa chairman Gentry Collins, who was the RNC’s political director under Steele but resigned with a blistering statement that accused Steele of letting the RNC’s donor base “wither”.

Maria Cino, a former Bush administration official has also entered the race. Cino carries ties to Minnesota, as the operations manager of the 2008 RNC convention in St. Paul.

But the frontrunner right now seems to be Wisconsin GOP Chairman Reince Priebus, a prolific fundraiser and former Steele ally who recently oversaw a state party that ousted a Democratic senator, took back its governorship and won two House seats. Sutton said he’s backing Priebus because he’s a “technician” who will shift the RNC’s priorities to fundraising and voter turnout.

Asked if Steele would win, Coleman replied: “I don’t know. I have a lot of friends in the race, his race is very challenging.” And then, invoking Ronald Reagan’s famous maxim: “I don’t speak ill of my fellow Republicans.”

With Steele in, Norm Coleman says he will not run for RNC chairman

By Derek Wallbank and Cyndy Brucato