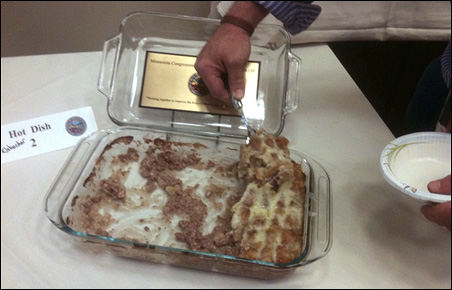 WASHINGTON — The prize was a hot dish dish, with a plaque affixed. And you’ll be able to see it in Amy Klobuchar’s office.

Klobuchar won the Minnesota delegation’s first hot dish competition with a Taconite Tater Tot entry that was all sorts of cheesy, crispy goodness and garnered 55 points out of a possible 60. It bested five other entries from Al Franken, Michele Bachmann, Keith Ellison, Betty McCollum and Tim Walz, whose chicken and wild rice hot dish came second.

It was a blind taste test, so the three-man judging panel of former Reps. Vin Weber (R), Gerry Sikorski (D) and I didn’t know whose dish was whose before we tasted. That having been said, we all came to pretty much the same conclusion. For what it’s worth, I gave Klobuchar and Walz 19 out of a possible 20 points, and they tied as my top pick.

Franken’s office posted all the recipes online here. All six lawmakers said they hope to make this an annual tradition.