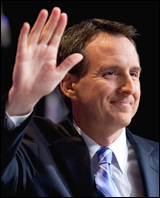 But it’s interesting to note that his very first tour stop on his book tour is not Des Moines, Dubuque, Concord or Manchester.

Instead, Pawlenty’s off to Florida, the prized gem of presidential swing states. With 29 electoral votes now after the 2010 census, it’s by far the largest swing state on the map.

Pawlenty begins his tour in Tampa, which with its twin city St. Petersburg and the tourist and retiree-flush Orlando area together comprise what is known as the I-4 corridor, named after Interstate 4 that connects the two major metro areas that sit about 90 miles apart.

“The I-4 corridor is the swing region of the largest swing state,” said Aubrey Jewett, political science professor at the University of Central Florida in Orlando. “We have had a fast growing population and have many voters who are not registered with either major political party (over 20 percent of the electorate). Thus they went for George W Bush in 2004 (and also by a slim margin in 2000) but then for Obama in 2008.”

“Significantly, the two I-4 corridor media markets hold some 44 percent of the state’s voters,” said Susan MacManus, professor of political science at the University of South Florida in Tampa.

“The markets are extremely competitive from a partisan perspective and have a higher-than-average proportion of independent (swing) voters.  The suburban counties in each market are the swing areas geographically. They went for Obama in 2008, but GOP in 2010.”

And so, several Florida political experts agree, Tampa is a logical first stop for the presidential aspirant.

“Tampa Bay accounts for nearly one in four votes in any statewide election – the electorate is roughly the size of Colorado or Arizona — and the rule of thumb is that whoever wins Tampa Bay wins Florida,” said Adam Smith, the political editor of the St. Petersburg Times.

How to succeed in the Sunshine State
Multiple members of Pawlenty’s camp declined to comment on the record about their strategy in planning book tour destinations, simply saying that the publisher thought his Tampa stop would be a good place to sell books.

But, to steal a line from National Press Club president (and native Minnesotan) Alan Bjerga, other stops on the book tour include Iowa and New Hampshire, so draw your own conclusions.

“What does Pawlenty need to do? First and foremost, he needs to clearly sell them on how he is different from all the other GOP candidates and why he can beat Obama and the other contenders cannot,” MacManus said, noting that Floridians have a recent history of electing new faces to high places.

“Pawlenty also has to convince Florida Republicans that he is truly a fiscal conservative and a capitalist who believes that government hinders, rather than helps, economic growth. Florida has long been an anti-tax state and 2010 simply underscored that point,” she said. “He must also convince them of his conservative credentials from a constitutional perspective — the second and 10th amendments are important to sizable blocs of GOP primary voters. Patriotism is also important (with Florida’s large number of active duty and retired military citizens).  So too are immigration, individual privacy rights, and homeland security (anti-terrorism).”

And Pawlenty’s message right now — that business evangelism and highlighting his economic message, projecting strength on national security and international relations while not really hiding but definitely not promoting his social conservatism — would seem to play well in Florida.

But there’s definitely a split between what primary and general election voters are looking for in a candidate.

“I-4 Republican primary voters are typically conservative on social and economic issues,” Jewett said. “The Tea Party folks and many others in the Republican base and among independents are also worried about the budget deficit and government spending so plans to do something to cut those would generally play well – although like most areas being to specific about cuts to specific programs may backfire.”

Looking at general election voters, Jewett said, “Pawlenty should stress jobs and getting the economy moving over social issues — Florida’s unemployment rates is about 12 percent and so is the I-4 corridor.

“Central Florida has been hit as tourism to Disney and other theme parks has been stagnant (except for the Harry Potter attractions), the Tampa area is still rebounding from the economic hit of the Gulf Oil spill, and the Space Coast has been rocked with layoffs because the Space Shuttle is winding down.”

Not coincidentally, Pawlenty’s current stump speech is almost all about the economy. We’ll see starting today how it plays in arguably the most important state in the 2012 election.