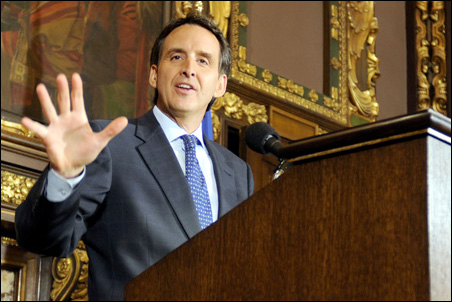 Jan. 5, 2011 — The new Republican House convenes and new members are sworn in. For the first time since 1947, a Republican will represent the 8th District of the Iron Range and northeast Minnesota. Rep. John Kline will take hold of the gavel on the House Education and the Workforce Committee and will be Minnesota’s only full committee chairman in Congress. Optimism reigns in Washington, as it always does, and bipartisanship is pledged on both sides. It won’t last long.

February/March, 2011 — Tim Pawlenty is expected to officially announce what he’ll be doing with his post-gubernatorial life. I’d take a bet that it has something to do with that staffer he hired in Iowa, and the national staff he’s been building. We don’t call him a presidential aspirant for nothing.

March 4, 2011 — A continuing resolution (CR) funding the federal government runs out, requiring a full federal budget (or another CR) to avoid a government shutdown. That budget will have to start in the House, where Republicans will have to either fashion a balanced budget without the tax increases they’ve pledged to avoid, or explain to deficit hawks in their grassroots why their budget will add again to the deficit and national debt.

March, 2011 — Speaking of which, sometime in March (or possibly before, given the recent tax-cut extension), the U.S. national debt is expected to run up against the debt ceiling of $14.3 trillion, requiring a bill to increase the debt ceiling or massive (and I mean massive) austerity cuts that significantly curtail spending in the short term or — the fiscal nuclear option — doing nothing and allowing the U.S. to default on its loans. This may be the first truly tough vote for House GOP freshmen like Chip Cravaack, who ran on a platform of cutting federal spending and the debt, but may have to swallow hard and allow the debt to expand in the short term.

Aug.13, 2011 — The Ames (Iowa) straw poll. It shouldn’t be a game breaker by any means for someone like Pawlenty if he falls short here, but it could spell the end for candidates on the lower tier of the GOP’s presidential race. A strong showing, however, could be what’s needed to vault him into the top tier.

Thanksgiving, 2011 — This is the line I draw in the sand for when the focus on Congress, policy and politics gets entirely replaced by a focus on the presidential race. It may be earlier (Labor Day seems too early, but Halloween is possible); it may be as late as Christmas or New Year’s. But as the clock hits 2012, all eyes will turn to the presidential race and make compromise on any major issues a much tougher ideal to achieve. If it’s tough-lift legislation, it probably has to be passed before then or it may as well be dead and buried with more than a year left in the session.

Spring 2012 — By spring of 2012, new congressional districts should be drawn, and races will take shape. Minnesota kept each of its eight districts after the 2010 Census, but that doesn’t mean this round of redistricting will be easy. Three questions to keep in mind for the GOP: Can map-drawers combine Minneapolis and St. Paul into one district? How much exurban Twin Cities land can go into the 8th District, potentially shoring up freshman Chip Cravaack? And if it donates GOP territory to the 8th, can the 6th remain Republican enough to keep sending Michele Bachmann back to Congress? With a map drawn in their favor, Republicans might be able to pull a 5-3 majority.

And three questions for Democrats: What can you add to the 7th so a Democrat not named Collin Peterson could hold it? Are you confident that any Dem can beat Chip Cravaack right now, or does the 8th need more DFL-friendly territory (and where would you take that from)? Is there a way to ensconce the 2nd and 3rd into hardcore GOP districts, so as to potentially free up enough swing and DFL territory to switch the 6th? There’s a scenario, albeit distant, that sees Democrats wind up with a 6-2 congressional advantage.

May-July, 2012 — Back to policy for a brief moment. House Republican leaders said they plan to do the 2012 Farm Bill in 2012, and this is about the last chance before the lame duck. Lawmakers (including House Agriculture Ranking Member Collin Peterson) have been discussing significant changes to the subsidy program, possibly replacing much of it with crop insurance. If that happens, it would be the most substantive change in U.S. agricultural policy in decades.

Nov. 6, 2012 — Election Day. It all comes down to this day, as it does every two years. Can Barack Obama win another term as president? Do Americans vote to change from the candidate who two years ago ran on change? Will Republicans, faced with a very favorable map, retake the Senate? And can the GOP (which controls redistricting operations in most states) ensconce its newly-won House majority?