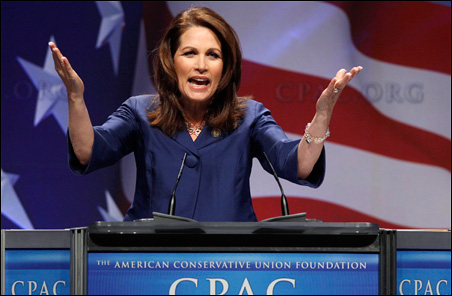 WASHINGTON — Rep. Michele Bachmann stood today in front of the largest annual conference of conservative activists in America and offered a diagnosis.

The problem, she said, is President Obama’s leadership in Washington, large deficits and the rising national debt that, she said, would top $20 trillion in six years if current spending trends continue.

Her prescription: To replace Barack Obama in the White House in 2012 with a true conservative. She didn’t say who with.

Bachmann opened the annual Conservative Political Action Conference (CPAC) in front of more than a thousand conservative activists and bloggers in the cavernous auditorium of the swanky Marriott Wardman Park. This was Bachmann’s base. It was a crowd that laughed at her jokes, gave standing ovations to her applause lines and literally hissed when she spoke the word “ObamaCare.”

As she has in countless speeches before, Bachmann railed against government spending. She noted a rising national debt, called for action (she opposes raising the debt ceiling and has proposed more than $400 billion in immediate spending cuts) and warned college students in the room that they could pay 70 to 75 percent of their income in taxes during their peak earning years if something doesn’t change.

The biggest outrage, she said, is that government “is intentionally consuming the future labors of Americans who aren’t even born.”

“Your future is personally tied into this next election, it’s that important,” Bachmann said. “This isn’t just something that someone’s trying to conjure up to scare you, this is your future.”

Defining success
Yet it’s hard to specifically gauge how Bachmann did with the crowd, if for no reason other than it’s unclear what she aimed to accomplish.

No doubt the crowd here loved her. She began and ended with standing ovations and was interrupted several times by applause. An hour after she spoke, the simple picture of her in a video montage brought a smattering of cheers.

CPAC as a conference points toward its presidential straw poll, which will be released Saturday afternoon. Last year, Bachmann took her name out of it. This year, she’s keeping her name in.

She’ll face off with a field of 15 (including Tim Pawlenty), but starts at a disadvantage against campaigns that literally paid attendees’ registrations in hopes that they’ll pack the poll accordingly. It’s a move that works for some campaigns, I guess, but given that most haven’t organized at all yet it’s hard to say how helpful the poll is in gauging support. Interesting? Yeah, but accurate? Probably not as much.

Far more telling for Bachmann will be her support at a reception here this afternoon. She invited the entire conference (11,000 or so) to come for an open bar (caveat: one drink apiece) on her tab.

Bachmann said she wanted to meet everyone, shake their hand and tell them thanks for all their hard work. Far more important than a speech is that one-on-one connection.

Today, she’ll thank them. In a few months’ time, she may ask them to work for her. Later, maybe, she’ll ask for their votes.