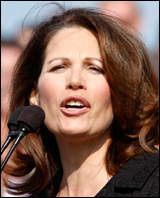 HAMPTON FALLS, N.H. – Michele Bachmann said Friday she was “a little disappointed” with House GOP leaders over their not insisting on the full rescinding of $105 billion already authorized to fund the health reform law, telling a crowd of activists here that “you don’t win if you don’t fight.”

Bachmann asked Republican leaders this week to refuse outright any bill that continues funding the federal government unless it also defunds the health reform law – including pulling back the $105 billion that was already authorized for implementation in the law itself.

However, when the latest three-week continuing resolution was released Friday morning, it contained $6 billion in cuts but didn’t include the defunding provision. Bachmann deemed that effort unacceptable, saying they just got a “tiny little cut for three weeks,” and pledged to vote no.

“It’s your state that fired the shot that was heard around the world, you are the state of Lexington and Concord (sic), you started the battle for liberty right here in your backyard,” Bachmann told a group of Republican activists at a fundraiser here on New Hampshire’s sea coast. “And the question to my fellow members of the House, and there are some, when will we start the battle for liberty in Washington D.C.?

“When will we start the battle? I’m not seeing it, I don’t know about you. President Obama did a press conference today, and he was on offense. We need to get on the field.”

Bachmann has pledged to vote against any further government funding bills until the health reform law is fully defunded or overturned, saying Republicans must use their leverage in holding the House and risk a government shutdown if necessary to insist on the cuts.

One of the first bills passed by the GOP-led House was a full repeal of the health care law, though the measure is unlikely to get picked up in the Democrat-held Senate. However, Republicans have so far been unwilling to insist on a full defunding by refusing to sign on to any more spending measures unless such a provision is in there.

To do so would almost certainly mean a protracted government shutdown because Democrats in the Senate and President Obama wouldn’t go for it.

GOP leaders have said continuing resolutions are just a stop gap measure to additional cuts, and that they’ll demand more and more as time goes by. The full list of cuts in this CR can be found here.

“The short-term funding measure introduced in the House today will give the American people another round of spending cuts as they wait for the Democrats who run Washington — in the Senate and White House — to determine a position other than the status quo,” said Speaker John Boehner. “The People’s House has already taken a clear position, passing legislation through a wide-open process that reflects the priorities of the American people, both in terms of how much should be spent, and how it should be spent.”

Boehner’s office did not immediately return a message seeking a response to Bachmann’s comments, but I’ll update here if and when they do.

It’s unclear how much support Bachmann has in the House GOP caucus for such a line in the sand though. Just six Republicans voted against the two-week continuing resolution that expires at the end of next week (Minnesota’s three other Republicans, John Kline, Erik Paulsen and Chip Cravaack, all voted in favor).

“While short term funding measures are not the preferable way to fund the government, we must maintain critical programs and services for the American people until Congress comes to a final, long-term agreement.”

Bachmann and Iowa’s Steve King have begun whipping Republicans to support a showdown measure. In a letter to GOP leaders earlier this week (and circulated widely beyond that), the pair wrote:

While some have argued that our defunding efforts in the CR should be limited only to those annual funds actually provided by the CR, we disagree,” they wrote. “If we do not stand our ground on the CR, leverage it as the ‘must pass bill’ that it is, and use it to stop the $105.5 billion in automatically appropriated funds, ObamaCare will be implemented on our watch, we will have conceded a significant amount of ground on this issue, and we will find it difficult, if not impossible, to regain the strategic advantage in future legislative vehicles.

Tea Party Patriots, a group frequently allied with Bachmann, sent a message to its membership asking them to call their members of Congress and demand the health reform funding rescission in this continuing resolution.

Several influential conservative groups, including the Heritage Foundation and Family Research Council have also indicated opposition to the continuing resolution for a number of additional or other reasons. FRC President Tony Perkins, for example, blasted GOP leaders for not including a provision to strip Planned Parenthood of its funding.

Bachmann is in New Hampshire this weekend for her first trip here as a presidential aspirant. She has said she plans to make a decision on whether or not to run for president by early summer.

Note: The battles at Lexington and Concord, which began the American Revolution, were actually fought in Massachusetts, about an hour south of Hampton Roads. It’s a sometimes-confused detail, as there is a Concord that’s the capital city of New Hampshire, but that’s not the same one as the battle site.