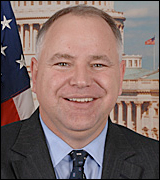 WASHINGTON — There isn’t a Republican in the race. The first campaign finance paperwork won’t be filed until the end of this month. No one even knows what Minnesota’s 1st District will even look like next year, because redistricting hasn’t happened yet (and won’t for several more months).

But the 2012 campaign for Tim Walz’s seat has already begun, as party strategists in Washington and in Minnesota begin laying the groundwork for a race both sides believe will be one of the closest in 2012.

The National Republican Congressional Committee, the central GOP arm tasked with helping elect Republicans to the House, has targeted Walz as one of its 12 best takeover opportunities.

Friday, the Democratic Congressional Campaign Committee (the NRCC’s opposite equivalent) placed Walz and 14 others on its Frontline list — representing the most vulnerable incumbents that Dems want to hold on to.

After winning his seat from Republican Rep. Gil Gutknecht in 2006, Walz’s first reelection campaign was a 30-percentage-point coast over Brian Davis. 2010, however, was a different story.

In a year that saw the GOP pick up 63 seats nationally, Walz was held to below 50 percent of the vote for the first time ever, eventually defeating State Rep. Randy Demmer by a 49-44 margin.

Democrats are confident that if Walz could hold back a challenge in 2010, he’ll certainly be able to do it again in 2012, which they predict will be a much better year for Democratic candidates. However Republicans note that more people voted against Walz than voted for him, and they think the 1st may be redistricted to include thousands more right-leaning voters.

That’s why, despite the fact that the calendar says that it’s more than a year and a half until Election Day 2012, the campaign has already started in the 1st District.

The quiet campaign
In most election cycles, an incumbent who gets less than 50 percent of the vote guarantees a public rematch, almost immediately. However, in a redistricting year, candidates in the 1st are waiting to see how the district lines are redrawn.

“A lot of people are positioning themselves right now,” said Steve Perkins, 1st District chairman for the Minnesota Republican Party. “There’s activity behind the scenes, if only because it might be a little bit premature to come out and announce that you’re going to run against the congressman when you might not even be in his district.”

Perkins said there’s “certainly an interest” from Randy Demmer in running again, though he hasn’t decided yet (MinnPost tried to reach Demmer for this article but was unsuccessful), adding that “there are certainly other people looking at it too.”

Yet Republicans are optimistic that not only will they draw a top-flight challenger, but that they’ll also be working in a better district politically. Perkins said estimates he’s seen suggest the district will need to add 25,000-30,000 people, and, as the district can only expand to the north, “it’s hard to see where you pick up more people who are Democrats or more liberal.”

However, Democrats have their own structural reasons to be optimistic.

Despite being the GOP’s top Minnesota takeover target in 2008 (which he was until Election Day, even though Chip Cravaack pulled an upset and Demmer didn’t), Walz held on in his own seat in what would up being a very Republican year. In 2012, with an improving economy, the political climate may not be as kind to the GOP.

Moreover, it’s a presidential year, and Minnesota as a whole has voted Democratic for more elections in a row than any other state in the nation. Money spent by President Obama’s campaign, and especially the get-out-the-vote operations it funds, stand to benefit candidates down the line, including folks like Walz.

In addition, Amy Klobuchar may represent the Democrats’ strongest national reelection prospect in the Senate, so hopes are high in DFL circles that a majority of voters in the 1st will get to the House race having already voted twice on their own ballot for Democrats.

Since it’s such early goings, much of the campaign now focuses on laying the groundwork for the 2012 campaign, which basically translates (this early) to organizing and raising money.

The first campaign finance reports for 2011 aren’t due until March 31.

As a Frontline member, Walz will be exempted from paying any fundraising member dues to the DCCC — so any cash he raises stays within his account. And while all fundraising goals are private, DCCC officials say Frontline members “must sign a memorandum of understanding that requires Members to meet aggressive fundraising goals, accelerate volunteer and recruitment efforts, and increase their online networking.”

The public face
The most public part of this campaign so far: 40 NRCC e-mail blasts to reporters so far this year, several of them questioning which way Walz will go on a vote, then blasting him whichever way he does. To put that number in context: The House has only been in session for 23 days this year.

It started on Jan. 5 by taking him to task for backing Nancy Pelosi for speaker.

“With this first vote, Walz’s constituents can clearly foresee that he will continue to support the same job-killing and big-spending policies rejected by the American people at the ballot box,” NRCC Communications Director Paul Lindsay wrote.

The most recent, on Monday, hit out at Walz (again) for not supporting the GOP’s deep spending cuts. “In following along with Democrat plans to block serious attempts at fiscal reform, Walz is instead signaling his belief in the status quo that includes billions of dollars in documented government waste and a projected $1.65 trillion deficit which continues to hamper economic recovery,” Lindsay said.

By comparison, the Democrats’ favorite target has been Michele Bachmann. The DCCC has hit out at her 16 times, targeted Erik Paulsen 12 times and put out just one e-mail blast apiece against Chip Cravaack and John Kline.

Update: The DCCC called to clarify that they are also aggressively targeting all four of the Minnesota Republicans. I apparently didn’t get all the e-mails, in part because (unbeknownst to me) they tried to be nice during the parental leave and pulled me off some of the lists, so disregard the numbers in the above paragraph.

“We just had an election,” Walz said. “We’re getting down to work and once again these folks are distracting from it, so we go on with our business and the people are the ones who are going to make the determination.

Crossroads GPS, an outside group co-founded by former George W. Bush strategist Karl Rove, also made a small radio buy targeting Walz, signaling that this district may be heavily targeted down the road with extra money not allowed before the Citizens United decision.

Walz, meanwhile, says he’s not at all surprised by the attention Republicans are focusing on his district, and suggested part of it is because Republicans are energized by more outside money than they know what to do with.

He said he’s expecting outside groups like Crossroads to pump in a million dollars into the campaign, above and beyond what the eventual GOP candidate raises, likely setting a record for spending in the 1st District.

And Walz said he’s ready for it.

It’s early, but campaign for Walz’s seat already under way