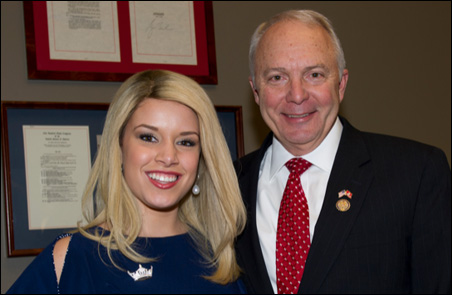 WASHINGTON — Hours before a vote on the first major education bill in the 112th Congress, restarting a school vouchers program for poor students here in the District of Columbia, House Education and the Workforce Chairman John Kline held a meeting to talk about education affordability.

Her name is Teresa Scanlan, and she was homeschooled for much of her childhood in Nebraska. She’s better known today by her title: Miss America.

“The Congressman also discussed education reform with Miss Scanlan, including the biggest challenges Congress currently faces with fixing No Child Left Behind,” said Kline spokesman Troy Young. “They also discussed her education background; she was home-schooled for much of her childhood but also attended a private high school for one year and a public high school for one year. ” Young added that Kline expressed his support for “protecting the rights of parents to home school.”

Scanlan said education, particularly college affordability, would be a focus of meetings on her Washington trip, which also included a meeting with Secretary of Education Arne Duncan.

“As Miss America 2011, I have a unique platform to join the chorus of voices from my generation who want to make America stronger through education,” she wrote in an op-ed for The Hill today. “Help the Class of 2011 achieve our dreams, and I promise we won’t let you down.”