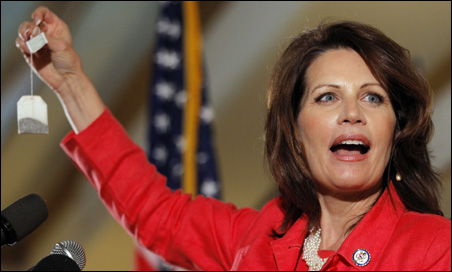 BARRINGTON, N.H. – Michele Bachmann arrived in New Hampshire a bit of an unknown commodity. For most who saw her in her 24-hour swing across the state, it was their first time meeting her or seeing her speak live in person.

And as she was new to them, they were new to her. This was Bachmann’s first visit to New Hampshire as a presidential aspirant, and when she got to the section of her speeches where candidates list ties to the place they’re speaking, Bachmann noted that she’d visited college friends in a small town in the lakes district.

At a fundraiser Friday night, state party chairman Jack Kimball said Bachmann “doesn’t really know it, but she’s got a great following here. She’ll find that out in the next 24 hours.”

The stops included retail meet-and-greets, like her stop at Calef’s Country Store, which has been in continuous operation since 1869, at which she sampled cheese, hugged children and made sure to pick up some store-made gingersnaps and maple syrup for the road. She spoke to donors in a palatial house on the Seacoast, at a party fundraiser at a hotel in Nashua and in a factory where she delivered what in my opinion was probably the single best speech she’s ever given.

This trip had its share of whoopsies, what one might call rookie mistakes, but as she closed that final speech, the applause was so rapturous that her words weren’t audible from 15 feet away.

Bachmann, of course, is in the midst of deciding whether or not to run for president. That’s why she came here, and one wonders what the reaction she got will mean as she, her family, and senior PAC staffers discuss the trip on the plane ride out of here.

“I’ve seen that people are more energized than ever, and that gives me great hope,” she told reporters after a morning speech in Nashua. Asked if that was specific to her future decision or just a general statement about the electorate, Bachmann responded that “that is one factor and we’ll take it into account for this summer’s decision.”

No, it didn’t come easy. There were gaffes, interrupting protests and technical difficulties, and more than one person said she might not be ready for presidential prime time just yet.

When she got here Friday night, she mistakenly said the battles of Lexington and Concord were in New Hampshire. They happened in Massachusetts. She repeated the line again Saturday morning, but at the end of the day, the line had morphed into being “you sent so many of your brave militiamen down to that battle.”

She wrote on her Facebook page late Saturday, less than an hour before catching her departing flight, “So I misplaced the battles Concord and Lexington by saying they were in New Hampshire. It was my mistake, Massachusetts is where they happened. New Hampshire is where they are still proud of it!”

Most news reports about her trip so far have led with that mixup.

And then in Nashua, where someone made the decision to allow a dozen non-paying college students into the New Hampshire GOP’s fundraiser Bachmann was headlining – a decision that was openly lauded by an introductory speaker.

Turns out those college students were actually protesters, who interrupted Bachmann mid-speech with a shouted slogan about AIDS vaccine availability and affordability, it seemed to throw her off her game for a few minutes. She joked that somebody must have bussed the college students in from Madison and tried to move on, but it took her a few minutes to regain her cadence.

Dani Podvojski, a registered independent from Nashua who describes herself as conservative, watched the speech, the interruption and Bachmann’s recovery and pronounced herself “impressed” with the third-term congresswoman.

Yet when asked if she would support Bachmann if she ran, Podvojski lumped her in with Sarah Palin and replied “They’re great, but I can’t see them as presidential. They need more experience.”

That was also the impression of state Sen. Fenton Green, a New Hampshirite who grew up in Edgerton, Minnesota. “I describe her as Minnesota’s Sarah Palin,” he said, adding that she’s a “very strong constitutional conservative.” But he likely won’t be backing her for president.

“She needs to wait a few years, but it’s good that she’s coming now because it takes two or three cycles.”

Bachmann leaving with more friends than she came here with

At the end of the day, however, Michele Bachmann found her voice.

“The greatness of this nation is the sovereignty of the individual,” Bachmann said to her first of several standing ovations at a factory here.

Then when she told activists that she’d vote against every federal spending bill until money already authorized in implement the health reform law was repealed, she got another. By the time she was finishing speaking, the crowd was standing and clapping nearly constantly.

“I don’t know what to say, she was amazing,” said Mary Anne Cooper of Dover.

And despite the disruption in Nashua, the overall reaction was similar.

Citing her opposition to the health reform law, New Hampshire House Speaker William O’Brien introduced Bachmann at a talk by saying she has “done more to protect the citizens of New Hampshire than our Democratic governor.”

“I was very skeptical of Michele being presidential material when I got here,” said James McCloskey of Manchester, just after Bachmann concluded a speech  to Republicans at a hotel in Nashua. “I’m amazed. She’s incredible. She’s far better live than on YouTube.”

And the ultimate question for Bachmann as she journeys around early primary states like New Hampshire: Can she bridge the gap from Tea Party conservative icon to plausible presidential contender?

“I would give it very serious thought,” McCloskey said. “I’m a lot more sold on her now than I was at 10:30 this morning.”