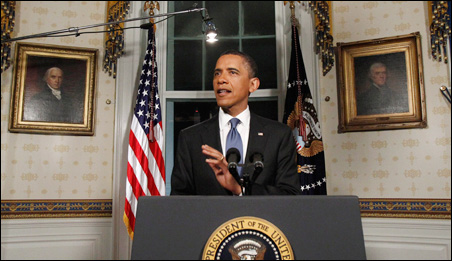 REUTERS/Jim Young
In a speech later today, President Barack Obama is expected to endorse a return to the Clinton tax rates for those making a certain amount of money.

WASHINGTON — In a speech later today, President Obama is expected to call for increased taxes on high-income earners, an idea that is being met with an apocalyptical “no” from Republicans.

It’s a non-starter they say, and higher tax rates will kill the economic recovery. Higher taxes on higher-income people, which hit some small businesses, will force layoffs. Higher taxes on energy firms, another idea they say Obama might offer, will cause higher prices at the pump and cause additional economic calamity. In short, said House Speaker John Boehner, if Obama proposes any of that, it’s so much of a no go that it’ll show he’s not being “serious.”

“If the president begins the discussion by saying we must increase taxes on the American people, as his budget does, my response will be clear: tax increases are unacceptable and are a nonstarter,” said Boehner.

So what is this calamitous hike the president may sign on to? In fact, it’s simply the tax rates from when Bill Clinton was president. Incidentally, that was the last time the federal budget was balanced too.

“For those people who make over $1 million a year, if you have their taxes set at the levels during the Clinton era — at a time when we were very prosperous — you would save nearly $400 billion in 10 years on the deficit,” said Sen. Amy Klobuchar on Tuesday. “While not all my colleagues agree on how or even whether we should raise more revenue, every serious bipartisan proposal has made it a clear must.”

A look at the table, and what’s on it
Setting rhetoric aside, one finds that the differences in policy here are real, deep and vast.

Paul Ryan’s budget would take the top tax rates down much further, to 25 percent. That’s not just Ryan’s idea, it’s the firm goal of the House GOP. Ways and Means Chairman Dave Camp told reporters in March that the goal of his panel is to lower the top individual and corporate rates to 25 percent.

On the other hand, several Democrats (like Klobuchar) would support allowing some of those Bush tax cuts to expire, putting the top tax rate back where it was. That policy would would return a top tax rate of 39.6 percent and sliding scale down from there. Since the second Bush tax cut took effect in 2003, the top tax rate has been 35 percent.

And liberals like Keith Eillison want to not just let the entire cuts expire, but increase those top rates, adding in a 45 percent rate for millionaires up to a 49 percent rate for those making $1 billion or more per year.

“Our great country has made a way for people to make fortunes, and that’s a good thing,” Ellison said after announcing his plan last month, listing off public schools, national defense, patent and copyright protections, law enforcement and other guarantees of a secure society provided by the government. “I think that for all that, patriotic Americans would not mind paying their fair share.”

In a speech later today at George Washington University, Obama is expected to endorse a revenue plan somewhere along Klobuchar’s lines — a return to the Clinton tax rates for those making a certain amount of money. While the White House has not released specifics, other similar plans place that floor at $250,000, $500,000 or $1 million and above.

Obama is also likely to target individualized tax carve-outs, which Democrats have taken to calling tax expenditures. The most common one cited on the left is a tax break for oil companies that was intended to help defray exploration and drilling costs when the price of gas was cents for a gallon, but remains as the cost-per-gallon now flirts with $4. Republicans have pre-framed that idea as a tax on energy which would increase prices at the pump.

Another item on the table will be a partial curl-back of the mortgage-interest deduction. No, it wouldn’t go away, but it would be limited, say to the first $500,000 on a home. The average home price in the Twin Cities market is $174,000, so a large majority of Minnesotans wouldn’t see any impact at all there.

For those in the ritzy parts of town, or in more expensive markets like San Francisco, New York City and yes, Washington, they could still take the deduction to $500,000 in value, but would be on the hook for all their mortgage interest beyond that. Klobuchar said she’d like to see such a plan phased in, so as not to disrupt the fragile housing market, but estimated that proposal could save $400 billion or more over the next decade.

Republicans split
Republicans have been split on whether to raise any revenues at all. Some, like Camp, have said the tax base needs to be broadened by closing loopholes, eliminating some tax breaks, etc., while others hold fast to the idea that anything that increases revenue is a tax increase, and tax increases are bad.

Certainly the starting position among Republicans though, is that tax hikes are a no go.

“Not only is raising taxes the wrong move in the current economic environment, but it locks in the Democrats’ status-quo agenda to keep spending taxpayer dollars on duplicative big-government programs,” Majority Leader Eric Cantor said. “Furthermore, it’s the latest in a series of flip-flops from the president and an affront to the bipartisan tax deal that he negotiated with us this winter and has repeatedly credited for the economic uptick.”

Lost in the politics of this argument is that the president and Democrats in the Senate actually have a pretty strong hand to play on the revenue debate. If they do nothing, the entirety of the Bush tax cuts will expire.

Of course, that’s the same position they held at the end of 2010, when they held the House as well, and that debate ended in a short-term extension of every dollar in tax cuts.